PROVO, Utah -- Meagan Grunwald, convicted for her role in the murder of a Utah County Sheriff's deputy and the shooting of another, will have a chance of being released from prison one day.

At the end of a long and emotional sentencing hearing on Wednesday afternoon, 4th District Court Judge Darold McDade sentenced the 18-year-old Grunwald to serve 25 years-to-life in prison with the chance of parole. He added another 5-to-life for other charges, bringing the total to 30-to life.

"I'm very sorry for any pain or loss I have caused," Grunwald sobbed as she spoke to the judge. "I do regret all of my actions."

The sentence came at the request of Sgt. Cory Wride's family, who offered moving statements of forgiveness.

"You are forgiven," Sgt. Wride's widow, Nannette, cried as she spoke to Grunwald. "Sweet girl, I hope one day you can forgive yourself."

Grunwald was convicted by a jury earlier this year in the murder of Utah County Sheriff's Sgt. Cory Wride and the wounding of Deputy Greg Sherwood. Wride encountered Grunwald -- then 17 -- and her boyfriend, 27-year-old Jose Angel Garcia Jauregui, stopped along a roadside in Eagle Mountain on Jan. 30, 2014.

The defense claimed Grunwald had just learned that Garcia had a warrant out for his arrest, and that he killed Sgt. Wride and forced her to drive in a high-speed chase that spanned two counties and resulted in the shooting of Deputy Sherwood, a carjacking near Nephi and a shootout with police that ultimately ended with Garcia dead.

While prosecutors conceded that Grunwald never pulled the trigger, they said she was not a hostage as the defense had claimed. They said she was a willing accomplice, acting out of love and a desire to keep her relationship going.  Even though she did not pull the trigger, Grunwald faced aggravated murder because Utah law does not allow for aiding and abetting.

Others said she made those choices that put her in prison. Deputy Greg Sherwood, who was shot in the head, said she chose to help her boyfriend and escape from police.

"I would have protected her with all my energy. Instead, she made the choice to run," Deputy Sherwood told the judge.

Speaking to the court, he described being shot in the head and the long road to recovery he is on. He insisted he would not let the shooting ruin him -- but asked for justice.

Kathy Wride, Sgt. Wride's mother, asked Judge McDade to give Grunwald a chance at parole, telling him: "I believe in second chances."

Other members of the Wride family echoed that sentiment. Sgt. Wride's widow, Nannette, spoke about how her life was shattered by her husband's murder. She spoke directly to Grunwald, saying that if she was in trouble, all the teen needed to do was ask Cory Wride for help when he asked if she was OK.

Nannette Wride asked for parole and said she would be at Grunwald's parole hearings -- rooting for the teen to turn her life around. As she finished speaking to the judge, Nannette Wride smiled briefly at Grunwald. The teen appeared to be crying.

Judge McDade had two options: life without the possibility of parole, or 25-to-life in prison with the chance of parole.

"Your actions contributed to the death of a very good man," the judge told Grunwald.

He told Grunwald he believes she is a victim, "but not in the way you look at it."

Outside court, Grunwald's defense attorney, Dean Zabriskie, said he was grateful for the words of the Wride family. Asked how Grunwald viewed her sentence, he told FOX 13: "She's devastated."

Grunwald is expected to appeal her conviction, Zabriskie said. 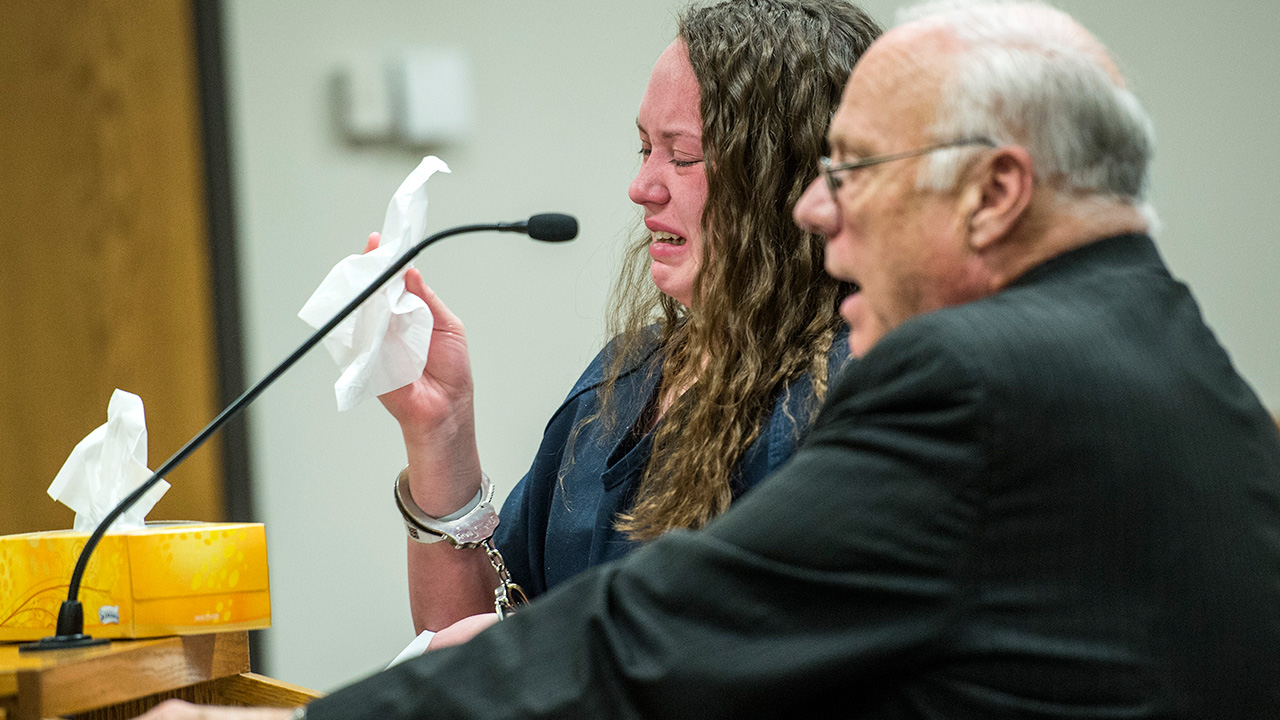