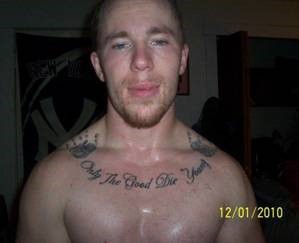 UPDATE: Police have arrested the pair after a FOX 13 News viewer spotted them in Morgan County and called authorities, click here for details.

SALT LAKE CITY — Police in Salt Lake City are requesting the public’s help locating two suspects wanted in connection with the theft of two handguns from a pawnshop, and the pair is also wanted in several other states and should be considered armed and dangerous.

According to a press release from the Salt Lake City Police Department, the suspects are 31-year-old Daniel Lyman-Muzzy and 35-year-old Regina Collins.

The pair allegedly entered a downtown pawn shop on June 25, and while Collins distracted an employee the male suspect stole two semi-automatic handguns from a display case. The press release states both are wanted by the U.S. Marshall’s Service for robberies and burglaries in several other states.

Police state the suspects are armed and dangerous and citizens who see them should not approach but should instead call 911. Anyone with information about the crime or the suspects is asked to contact police at 801-799-3000.

Lyman-Muzzy is also known as Eamon O’Connor, Daniel O’Connor or Joe Lyman. He is described as being a white man who stands 5-feet 3-inches tall and weighs 140 pounds. He has brown hair and blue eyes, and he has a tattoo on his chest that says “Only the Good Die Young.”

Regina Collins is described as being a white woman who stands 5-feet 2-inches tall and weighs 110 pounds. She has blonde hair and blue eyes.

One or both suspects is possibly driving a dark-colored KIA Sorento or Volkswagen Jetta with Kentucky or Tennessee license plates.