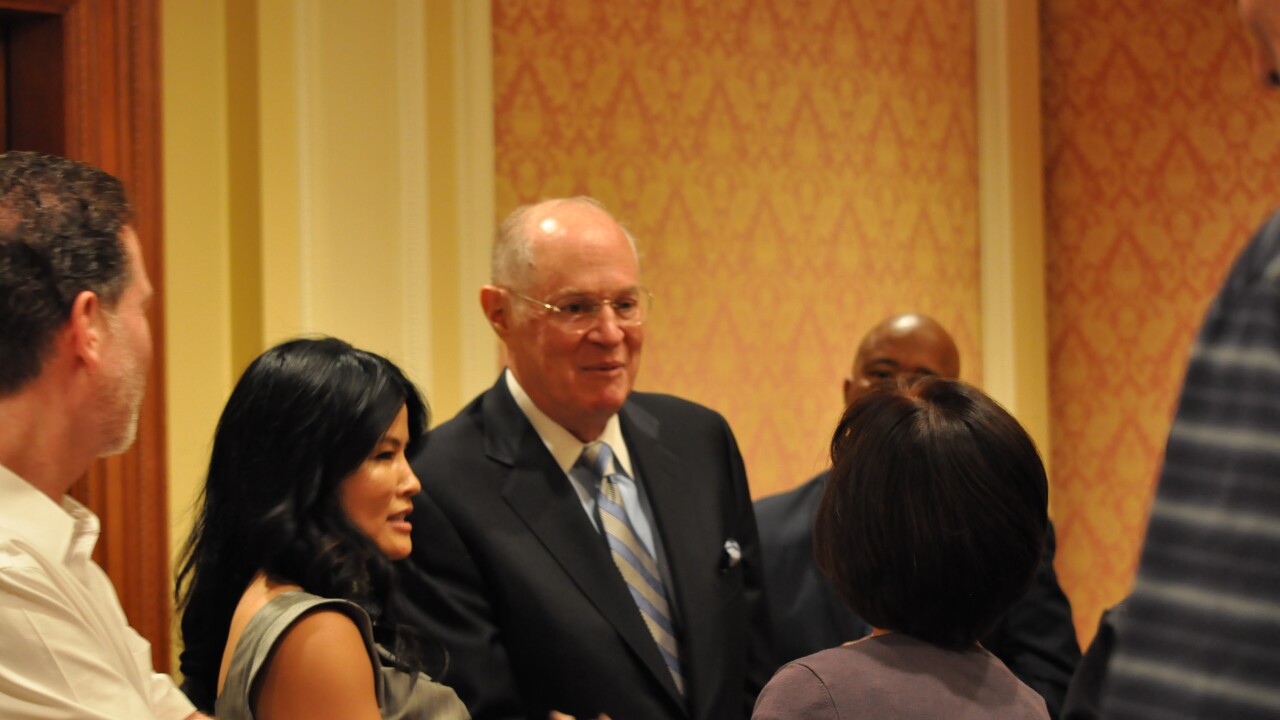 SUN VALLEY, Idaho – U.S. Supreme Court Justice Anthony Kennedy appeared to make subtle references to his historic ruling on same-sex marriage during a speech on the evolution of the law.

Addressing the Utah State Bar’s annual convention at the resort on Thursday, Justice Kennedy spoke primarily on the history of the Magna Carta, the founding document that established the rule of law 800 years ago.

“For you young people, I know on your next date or get-together, you’re going to talk about Magna Carta,” he joked to the standing room-only crowd. “You’re going to look really cool.”

FOX 13 was allowed to attend the speech, but video and audio recordings were not allowed.

Justice Kennedy said the Magna Carta was seminal in the United States’ evolution of its constitutional identity.

“The Constitution doesn’t come from on high. It’s yours!” he told the crowd. “It doesn’t belong to judges and lawyers. It’s yours! It came from you. This is the meaning of the Magna Carta.”

Throughout his remarks on how the Magna Carta influenced the U.S. Constitution, he referred to “evolution.”

“Remember that Constitutions take time. We have to learn. If the framers had known all of the specifics, all of the rudiments, all of the elements of a just society they would have put them down,” he said. “They used spacious words: life, liberty, property. They didn’t presume to know or predict all of the injustices that a society might encounter over time.”

Justice Kennedy delivered his remarks a little over a month after he issued the historic ruling in Obergefell v. Hodges that legalized same-sex marriage nationwide. He did not address the ruling directly, but appeared to make reference to it at one point in his speech.

“Sometimes people say the Supreme Court is there to protect the voice of a minority,” Justice Kennedy said. “Perhaps, but over time I think most Supreme Court decisions have been accepted as consistent with the views and beliefs and commitments and ideas and hopes and dreams of the people.”

Utah’s ban on same-sex marriage was overturned in 2013, when a federal judge ruled Amendment 3 (which defined marriage as between a man and a woman and did not recognize anything else) was unconstitutional. Utah appealed its case all the way to the U.S. Supreme Court -- which refused to hear it -- making same-sex marriage legal in the state.

Other states’ marriage bans fell with court rulings until the U.S. Supreme Court agreed to hear a split involving cases in Tennessee, Michigan, Kentucky and Ohio. In a 5-4 ruling with Justice Kennedy authoring the opinion, marriage equality came to the United States.

“I can’t think of any more life changing opinion that’s happened in my lifetime. I think it’s changed lives for so many people,” said Angelina Tsu, the president of the Utah State Bar.

Other attorneys in the room believed Justice Kennedy’s remarks about the U.S. Supreme Court acting as a voice for the minority was a rebuttal to dissents over his ruling in Obergefell.

“I think his point is eventually it reflects the will of the majority,” said Michelle Mumford, a civil litigation attorney and incoming Bar Commissioner. “I think right now it’s perhaps still a minority position but not for long.”