UTAH -- A plume of toxic mine waste could reach Utah Monday morning, and the size of the spill at a mine in Colorado is now estimated at three million gallons--up from original estimates of one million gallons.

The contaminants released from the Gold King Mine near Silverton, Colorado, have turned the Animas River orange.

Despite the pictures that have sent fears downstream, The Utah Division of Water Quality said it may pose no threat to our state.

"The spill has gone through so many miles, it has been diluted and assimilated into the water bodies that it's no longer visible,” said Leah Ann Lamb, who is the Assistant Director for the Utah Division of Water Quality.

The EPA released sampling data on Sunday, and it was determined the spill is three times larger than first reported, now estimated at approximately three million gallons of waste.

"You could indeed rank the chemicals of danger and toxicity, and some of them that would appear at the top of the list are chemicals like arsenic, like mercury, like lead,” said Debra McKean of the EPA.

At one monitoring station, the level of lead increased 3,500 times it's prior level when the plume passed, but the levels are dropping back closer to normal fast once that plume passes.

"Dilution is the solution, and this slug of pollutants has mixed with a higher volume of water,” Lamb said. "…right now we believe it does not pose a threat."

Good news for Utahns, who sit downstream along the San Juan River.

All the same, Saturday the Navajo Tribal Utility Authority shut off water pumps to the small towns of Aneth and Montezuma Creek. Up to 25 gallons of water per family per day is being offered at the Montezuma Creek Fire Station.

Officials at Glen Canyon Recreational Area have warned people not to swim in or drink the water in the San Juan River arm of Lake Powell.

The EPA said 500 gallons per minute are still streaming from the mine, but that's being trapped in settling ponds.

With the plume no longer visible, Utah's Division of Water Quality has testing sites along the San Juan River they hope will help them figure out when the plume arrives 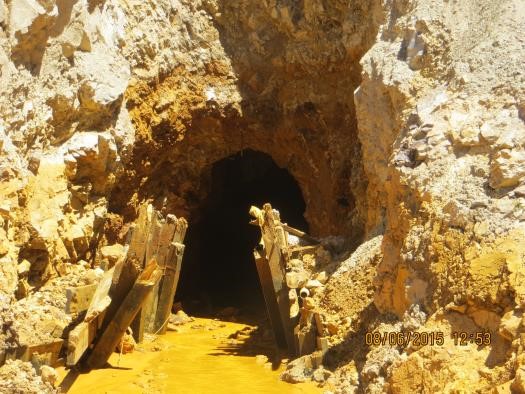