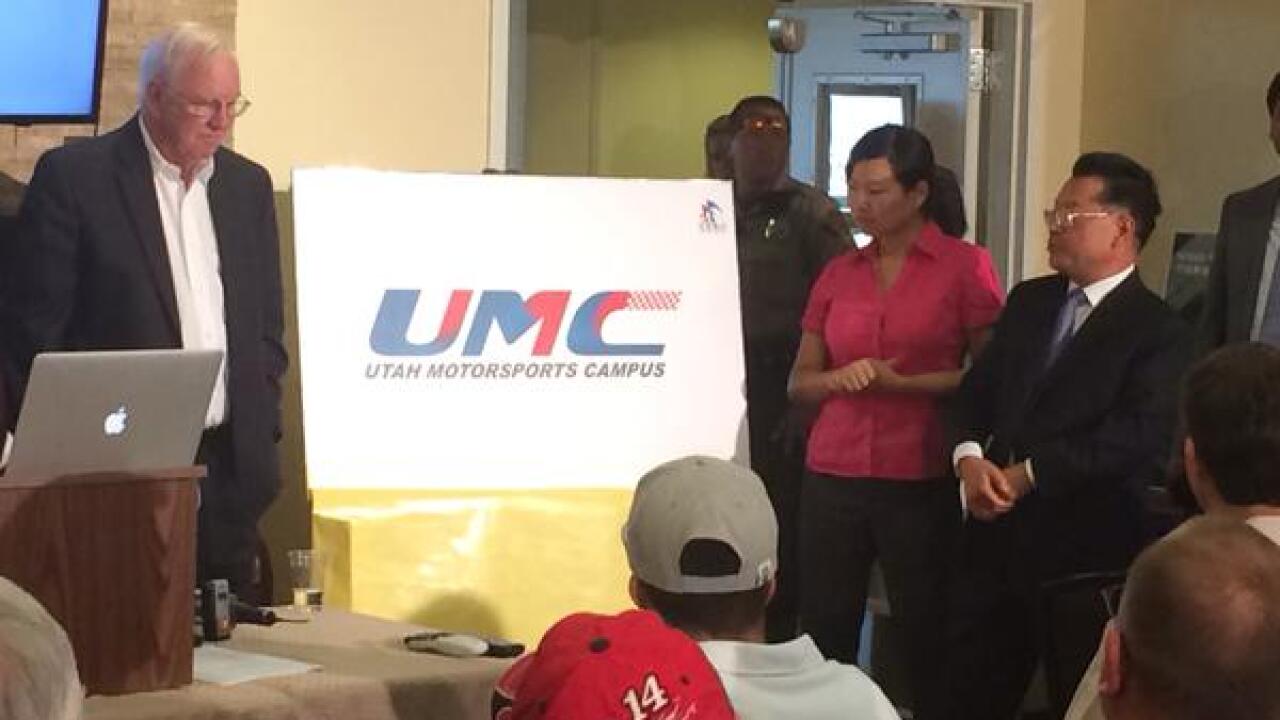 TOOELE COUNTY, Utah — A company out of China plans to buy the Miller Motorsports Park, Tooele County officials announced Tuesday, and Wednesday it was revealed the new name of the facility will be the Utah Motorsports Campus

Tooele County officials announced they made a tentative agreement with Mitime, a subsidiary of the Chinese company, Geely, which is the largest independent car company in China.

Wednesday's announcement was made during a community meeting attended mainly by members of the local racing contingent, who are in support of Mitime. The Chinese Company joked about their new logo, UMC. They said the U stands for United States, the C stands for China and the M stands for miracle.

"The great thing about Utah as a whole is that we are a very welcoming culture, we fortunately have a very specific demographic that is accustomed to leaving, learning other cultures and languages, and coming back home, we are used to diversity," said County Commissioner Shawn Milne.

Mitime Investment and Development Group plans to purchase the property for $20 million.

Tooele County officials say Mitime plans to improve the track and generate revenue of up to $1 billion to the area over the next 25 years.

Mitime officials say they will use the park as a way to train people in China on how to run a successful racetrack.

Geely wants to begin building race tracks all over China. Currently there are only six race tracks in the entire country of 1.6 billion, so the demand is there, but the knowledge of the business is not.

So Mitime will bring Chinese students to Tooele County and teach them everything they need to know about the racing business. Then the Chinese will take back what they learned and implement it in their own new tracks.

"One of the most important elements is the park is going to be a center to teach people about the business of motor sports," said Alan Wilson, who will be overseeing the day to day operations and ownership transition of the park.

"We'll go to the existing technical colleges, the existing highs schools, and we'll look for pupils to come into our campus to learn the basics of race team engineering, race team mechanics."

Mitime said they plan to keep the Miller Motorsports Park’s daily operations running as is, while also investing an additional $6-8 million on upgrades to the park.

There are plans to manufacture and test race cars at the park.

They also say employment at the sports park should double over the next few years. Many residents were excited about this new partnership, but others questioned the choice to sell to a Chinese company, especially when there was an American company offering 30 percent more money for the property. The county said it's all about the long-term future.

"One specific number they threw in during the negotiations was $270 million dollars of additional investment in the property itself over the next decade," said Commissioner Milne.

"China has been investing in the U.S. more and more nowadays, and Utah is a very good place to invest," Wang said. "We want this to be a base for tourists from China when they come here, this is their base."