OGDEN, Utah -- The pilot of a mosquito abatement airplane was returning to an airport in Ogden when he realized his landing gear wasn't descending like it should, and ultimately the man had to set the aircraft down without landing gear in place.

According to the Ogden Fire Department, the dual-engine mosquito abatement plane had to land without landing gear on Runway 3 at Ogden-Hinckley Airport.

The pilot, Robbie Allen of Vector Disease Control, spoke with FOX 13 News about the experience.

"I was returning back to the airport when I realized the gear wasn't coming down," he said.

Allen went northwest of the airport and flew in circles while attempting to diagnose and fix the problem. He said there are several emergency procedures and four different options for getting the gear to come down when it isn't responding, but in this case none of those methods were effective.

Allen said that time flying in circles meant he soon had a fuel situation to deal with in addition to gear problems.

Allen said he had never attempted such a feat before, and he hopes to never do so again.

"I cut the engines and feather the props and basically just come in gliding and then try and set it down as soft as possible and keep it as straight as possible on the runway after it touches down, which it was surprisingly gentle... it worked out well," he said.

The pilot tells FOX 13 News he didn't feel nervous in the moment.

"You go through all the procedures in your mind of what you can do, if there's other techniques you can try, but ultimately it's like, the nerves didn't set in until I was on the ground and got out of the airplane--then it gets a little nerve-racking then," Allen said.

No one was injured in the incident, and Allen said the damage to the aircraft appears to be minor.

"It doesn't appear to be too bad at all," he said. "There will be some sheet metal work underneath it, maybe a little on the gear--but it's kinda too early to tell right now. Mechanic is going over it, he'll get a final assessment here probably in the next couple of days."

While the aircraft is grounded for repairs, Allen intends to be airborne again bright and early Thursday at 7 a.m.--just in a different airplane. 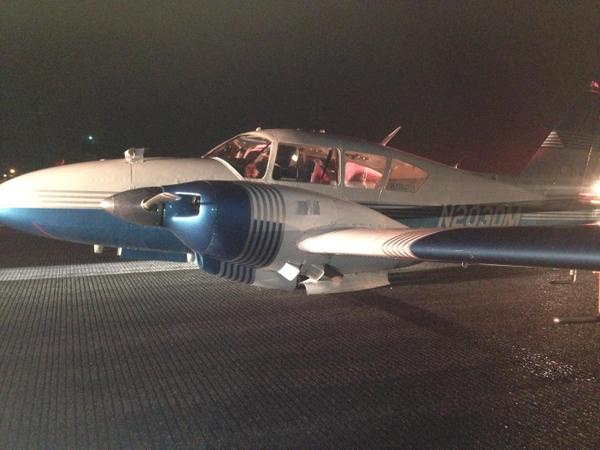