WESTON-SUPER-MARE, England (CNN) — The seaside town of Weston-Super-Mare in south-west England is chilled and gloomy when we arrive.

“Welcome to Dismaland,” a dead-eyed girl in Mickey Mouse ears greets at the gates of the old public pool.

We’re hassled by testy security guards at metal detectors before we catch sight of the main attraction: a decrepit fairy-tale castle in a moat of murky water and a crashed police van. 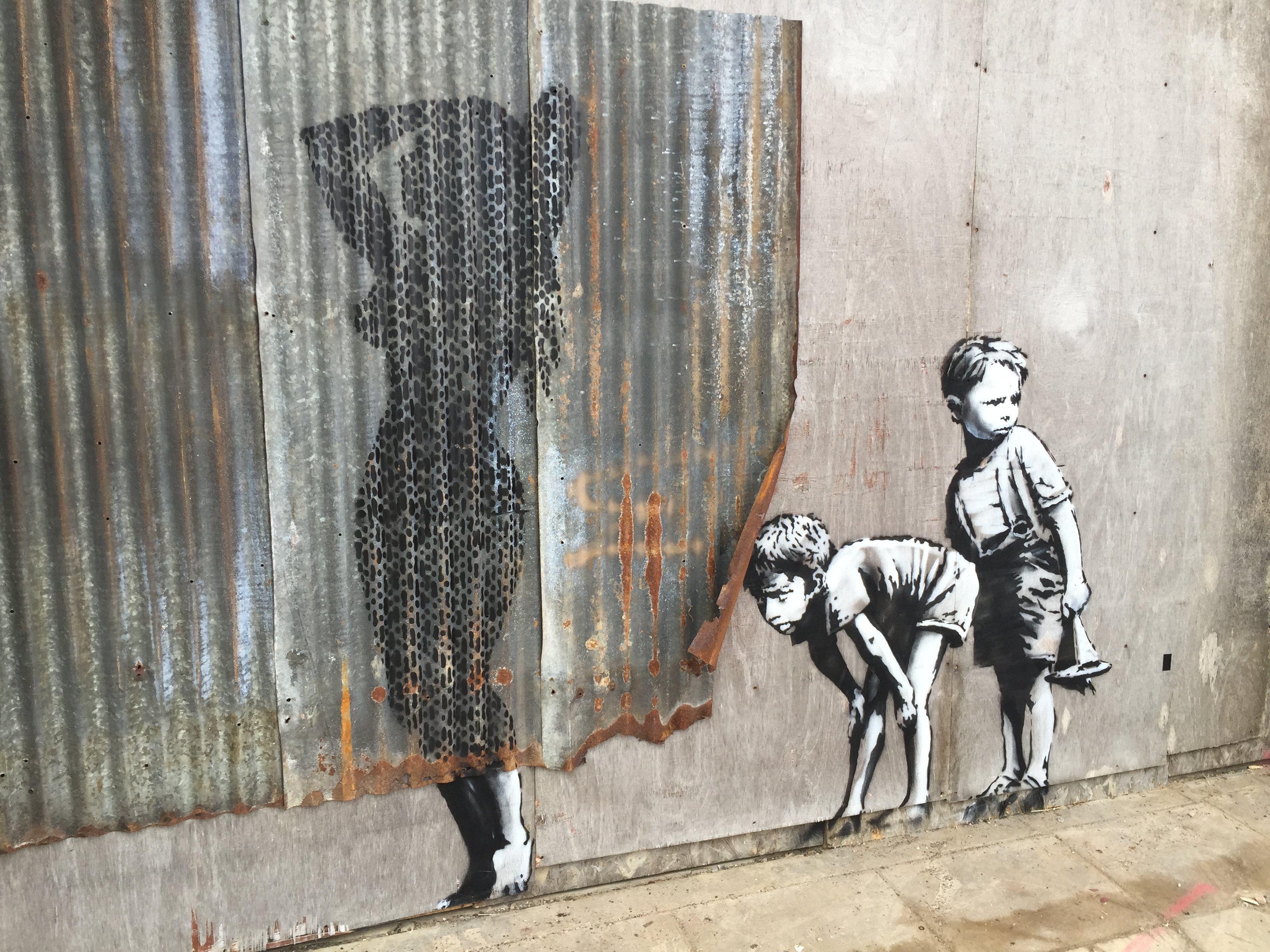 Surrounding it: an upside down slide fashioned from a battered old truck, an old-school carousel, a ferris wheel. Inside, Cinderella’s coach has crashed, surrounded by clicking paparazzi.

Here it is: the latest exhibition from Banksy, the art world’s favorite agent provocateur. Billed as a “bemusement park” and modeled after Disneyland, it’s a warped vision of the so-called “happiest place on Earth”. Officially opening to the public on Saturday, August 21 (it’s open to locals only tomorrow), it’s Banksy’s largest exhibition to date and the 4000 allotted daily tickets, priced at less than $5, are expected to sell-out fast.

This is, of course, the Banksy who has built a reputation for leaving often political, frequently comical graffiti everywhere from London to Gaza; the street artist known for exploring war, political corruption, hope and revolution with stencils and spray paint; the anonymous figure whose identity remains unconfirmed.

What we do know is he was raised in nearby Bristol, and that he’s been planning this for months. There’s been speculation for weeks about what was going on at the site — formerly a public pool. Locals were told it was a film set.

There are rides, yes, and three galleries featuring pieces from the likes of Damien Hirst, Jenny Holzer, and Banksy himself, along with lesser-known artists. The over 50 artists from 17 countries are united by their questioning — and defiance — of mass culture.

As was expected, the artist isn’t here to speak to his mission directly, or why he’s sending up Disney, but the artists on hand were more than happy to theorize.

“[Disney] is vulnerable, to me,” says Jeff Gillette, the Orange County-based artist who juxtaposes Disney characters with images of slums and dumps. “They’re such a big presence and such a big part of culture and symbolic of so many things. It’s hard not f**k with them.”

(To add insult to corporate injury, signs at Dismaland say lawyers are banned, along with spray paint, marker pens and knives.)

But it’s clearly not just Disney being criticized here. One of Banksy’s new works on display, ostensibly a game, has visitors navigating boats of migrants surrounding by floating bodies. Elsewhere, artworks from Sami Musa and Amir Schiby confront the Israeli-Palestinian conflict.

Behind the Ferris wheel and the high interest loan shop for kids seeking allowance advances, there’s the activist corner. After taking in the art, visitors can explore geodome covered in protest posters and the anarchist bookstore, or receive advice about collective bargaining and unions. A girl with cropped hair and a defiant smirk offers tips and kits for hacking bus stop billboard displays.

It’s not the kind of thing you expect from a seaside art exhibition, but there’s no doubt an audience. And not just the usual art fanatics streaming in from out of town for the Banksy experience and something from the gift shop.

Passersby on the way to the aquarium or the beach or home stop to ponder the ominous Dismaland sign and ask about admission without even knowing what’s happening. It’s a fun fair, some suggest, or an opening.

“It seems like an evil version of Disney,” a little girl in a GAP jumper muses near the barriers.

Well, art has always been open to interpretation.

Dismaland runs from August 21 to September 27.