MILLCREEK, Utah -- A man is facing numerous charges that include attempted murder after he allegedly shot both his estranged wife and another woman during a SWAT standoff in Millcreek that was made more dangerous when he cut a natural gas line and set up obstacles while barricaded in the home.

The incident began when police received a call of a suspicious situation in the area of 3300 South and 700 East at 8:09 a.m. When they arrived on scene, officers found a woman shot multiple times laying in front of the house.

"I saw a woman laying on the street, and I ran up to her, and she had been shot multiple times--there was blood everywhere," a witness who asked not to be identified told FOX 13 News.

She said she was across the street when she heard the shots, calling 911 as she rushed toward the victim. When she approached, she came into contact with the suspect. She said the man pointed his gun directly at her before speaking.

The alleged shooter was barricaded inside the home, and witnesses reported the man was holding his wife hostage and that he'd threatened to shoot witnesses if they didn't leave.  A probable cause statement identified the woman as the suspect's "estranged wife."

A press release states: "Officer[s] quickly rescued the woman from the roadway at great risk to their own safety."

The witness said it was a difficult scene to watch: "I just started bawling, it was very emotional. I saw them drag her away to safety, and I just couldn't believe I had seen it."

The woman who was shot was a friend of the couple who police said tried to intervene in the situation and defend the other woman. She was taken to a hospital in critical condition. According to the PC statement, the woman's wounds included "one gunshot wound in the head and one in the torso severing the victim's spine."

SWAT was called to the scene and surrounding homes were evacuated while nearby roads were shut down. Negotiators made contact with the suspect, later identified as 37-year-old Valentin Dulla Santarromana, or "Val."

Around 50 officers surrounded the area. The release states the negotiations made it clear the man wanted to harm both his estranged wife and police, and Salt Lake County Sheriff Jim Winder spoke about the man's behavior.

"He was trying to kill our officers, and he was trying to initiate a gun battle in which I believe he, the hostage, or all would be killed," Winder said.

Some time after negotiations began, shots were heard being fired in the home, and SWAT quickly made entry, "in an effort to intervene and save the life of the hostage. The suspect fired over a dozen rounds at SWAT Team members as they tried to get to the victim."

The press release states SWAT could smell natural gas as they entered the home, and that they used "tremendous restraint" in not firing rounds in return, due to fears of igniting an explosion.

Winder said SWAT had to overcome numerous barriers along access points inside the home.

"This wasn't your run of the mill barricade," Winder said. "He had countermeasures in place that, had they not been treated effectively, would have created significant problems... in addition to that, it appears he had turned on the gas in an effort to initiate an explosion in the residence."

SWAT located the suspect and hostage barricaded in the basement of the home. The hostage was shot several times and was listed as being in critical but stable condition.

According to the PC statement, the woman suffered four gun shot wounds: one in her arm, one in each of her legs, and one wound to the head where the bullet exited out through an eye. Hospital staff confirmed the woman lost one eye permanently as a result of that wound.

Unified Police Department said the estranged wife had filed a protective order against Santarromana, but authorities had not yet served that order. Police also said they were called to the couple's home earlier this month for a domestic violence incident.

While no one has died thus far in connection with the shooting, Utah is above the national average when it comes to domestic violence homicides. The state has several hotlines and resources available to those dealing with domestic violence to offer help and to help reduce the number of such incidents, click here for details.  Help is also available by calling 1-800-897-LINK (5465). The hotline is staffed 24 hours a day, seven days a week.

Winder stated the suspect may have fired up to 40 rounds during the incident, and, "the trajectory of the rounds indicates to me that he was firing in attempt to kill them."

According to the PC statement, the natural gas line in the home had been cut and the range/oven turned on.

Santarromana was interviewed and booked into jail on numerous charges, which includes several counts of attempted murder.

FOX 13 News' Robert Boyd will have more on this story Saturday on Live at Nine. 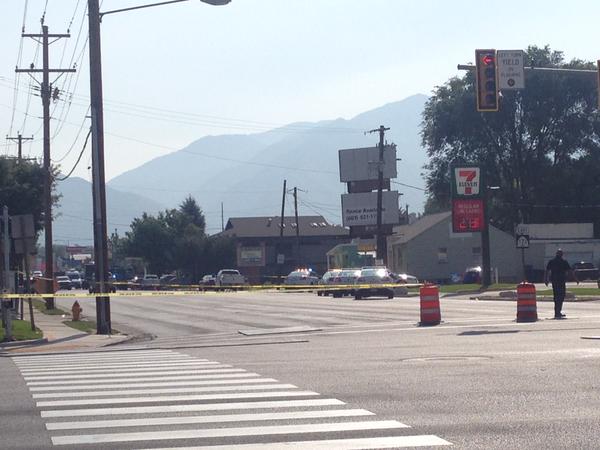