By: Ashton Edwards , Scott McKane
Posted at 8:14 AM, Aug 31, 2015
WEST VALLEY CITY, Utah – A stand-off in West Valley ended peacefully this afternoon after SWAT officers negotiated with an armed man who police say took his girlfriend's father hostage after a domestic dispute.

The stand-off happened after a woman and her 24-year-old boyfriend, Oscar Alcantara, allegedly got into a domestic altercation. West Valley City police say after the woman's father tried to intervene, the boyfriend took him hostage.

"We called out our SWAT team. We quickly cordoned off the area and engaged in a period of negotiations,” said Chief Lee Russo with the West Valley Police Department.

Shots were fired around 7 a.m. at 7100 West and Palomino Drive. SWAT teams were able to successfully negotiate with the suspect who they say was holding the 51-year-old man at gunpoint inside his home. He came out with the hostage around 1:30 Monday afternoon and police took him into custody.

"We have found evidence outside of this residence of shots being fired, including broken glass, and a broken side mirror on a vehicle,” said Roxeanne Vainuku, a spokesperson with the West Valley City Police Department.

During this standoff, police sent out a reverse 9-1-1 call to residents in the area warning them to stay inside.

“We had initial reports that he was held at gunpoint when we had some brief communication with the hostage. But overtime, we understand that the situation inside the home became less volatile, and there was a dialogue where the hostage was allowed to leave on his own accord,” said Chief Lee Russo, West Valley Police Department.

Neither Alcantara nor the victim were injured in the incident. But they say it was a long ordeal getting the suspect to finally come out of his home and surrender. 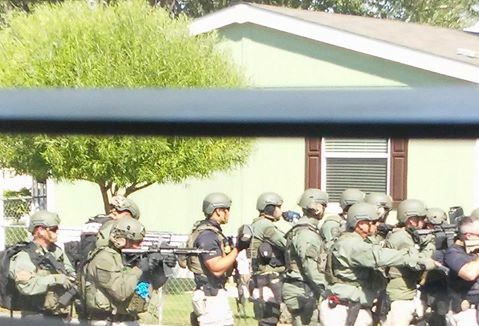 Authorities asked residents to stay inside the mobile home park until the situation was resolved.

Officers have established containment & are bringing in someone to speak w/ suspect & hopefully resolve situation pic.twitter.com/EzeutJuDut

Crews arrived at the scene and said they found evidence of a shooting just after 7 a.m.

Authorities said a school in the area, Entheos Academy, was on a voluntary lockdown as a precaution.

Children inside nearby Entheos Academy are secure. Will stay safely inside until situation resolved.