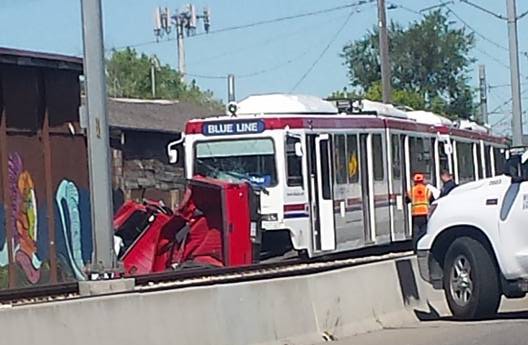 MIDVALE, Utah - Police have identified Howard Glenn Hillam, 80, of West Jordan, as the man killed after a truck he was driving collided with a TRAX train in Midvale Monday morning.

Police said Hillam drove his Ford F-250 at 35 mph through the TRAX arm while it was lowered and never slowed down.

The TRAX train was going near full speed at about 55 mph.

"We could see him moving, we were trying to get him to talk to us, trying to keep him conscious."

Michelle Day did what she could to help as he lied in the wreckage. She said she was the first out there to see him. She ran over from her home nearby.

She explained she’s gone through EMT certification. But even with her medical training, it soon became clear Hillam was beyond help.

"I just kept talking to him, 'Hey, my name's Michelle, can you tell me your name? I'm right here with you. Help's on the way,’” she said. “I just didn't want him to be all alone in that final minute."

Hillam died at the scene.

Unified Police Lt. Lex Bell said Hillam appeared to drive right through the flashing arm that lowered in front of the truck.

They don’t know why Hillam didn’t stop. The barrier broke off as he drove into it.

There were people aboard the train.

"There were nine people on the train,” Bell said. “None of them were injured."

While no one else got hurt, the crash damaged the track and train.

Crews spent all day clearing the wreckage. The TRAX lines in both directions stayed closed.

Bell said the crash didn’t cause any structural issues.

He expected the TRAX line could reopen as soon as crews removed the truck and train, and made repairs.

As of Monday evening, 8000 South had reopened across the TRAX intersection, though crews continued work on the line.

Bell expects the track to reopen by the Tuesday morning commute.

But for Michelle, she won’t forget what she saw as she rushed over to the dying man.

"The only thing that I could think of from the minute that I heard the impact was, somebody is injured and somebody needs help. And I just, I wanted to try and help," she said.

Police have not confirmed what led to the accident.

They said they will have to wait for the results of an autopsy and blood tests to see if Hillam was intoxicated or had a medical emergency at the time of the crash.

There is no immediate evidence of either cause at the site of the crash.