Uintah County searching for suspects who shot at officer during chase

VERNAL, Utah - Two suspects are on the loose Wednesday evening after a routine traffic in Vernal escalated into a shooting.

"I seen all the action going down through the field," said Vernal resident John Sweet, pointing to where he saw all the police activity early Wednesday morning.

He lives in an apartment building. He was just about to go to bed around 3:30 a.m., when he heard gun shots.

"There was 6 to 8 shots, sounded like," he said. "Sounded like there was a real gunfight going on."

He stood outside, watching the action after that unfold.

"There were three or four police cars, and I could hear sirens coming from all directions," Sweet said.

Two suspects in a reportedly stolen truck had led police on a chase after a traffic stop.

The truck ended up stuck in a field near Sweet's apartment building. The driver got out, "and fired several rounds at the officer," Lt. Campbell said.

He said the officer dodged the bullets and fired back.

But Lt. Campbell said the suspect's bullets did hit the nearby apartment building, the one Sweet lives in. One even pierced a wall into an apartment while a woman slept inside.

The residents living in the apartment talked with FOX 13 News off camera, and they said the woman was OK. The bullet ended up in a utility closet next to the water heater.

The two suspects got away by fleeing under the cover of darkness and by taking cover among the tall bushes and weeds of a field.

Police are still trying to figure out who they were and where they escaped to.

Sweet watched the search unfold, and he's glad no one was hurt.

"It was pretty intense for a while," he said.

Lt. Campbell said the officer involved in the shooting will be placed on administrative leave while they continue the investigation.

Anyone with information on the suspects or their whereabouts is urged to call police immediately. 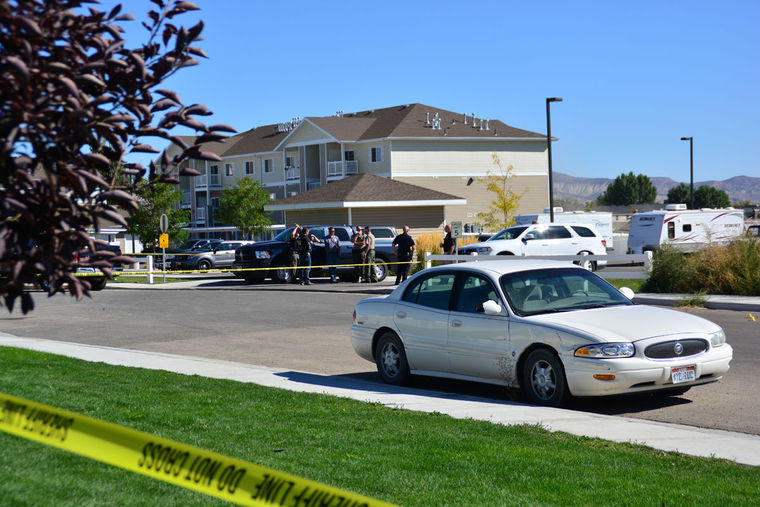