SOUTHERN UTAH -- Now 12 people have been found dead and one remains missing after two families were swept away in a flash flood in Hildale Monday evening.

On Tuesday, crews continued to recover bodies killed in the flood. The two families were out for a ride to watch to flood waters when they got caught up in it, officials told FOX 13 News' Ben Winslow.

Three children were rescued and crews are still searching for one person.

"We just realize that this was an act of God and something that we can't control," said Hildale Mayor Philip Barlow. "We do the best we can."

Lt. Gov. Spencer Cox is in Hildale surveying the damage and the National Guard has been called in to help with recovery and clean up.

"It is unbelievable and something you never expect to see or have to deal with and the community is just really in shock, as we all are," Cox said.

About 650 search and rescue crews are out looking for those still missing.

The victims are from the Colorado City and Hildale area and range from mothers to small children, said Kevin Barlow, Colorado City assistant fire chief.

Barlow said a tremendous thunder cell came through the area while two cars were on Canyon St. at about 5:40 p.m. MT Monday.

Officials say a family in a van stopped in an area known to flood to watch the water when they got caught off guard and their vehicles were washed down stream.

The youngest victim is 4 years old and the three other victims were mothers.

One survivor of #hildaleflood hospitalized over night. 6 of the deceased were located in Utah two in AZ almost 2 1/2 miles down stream. 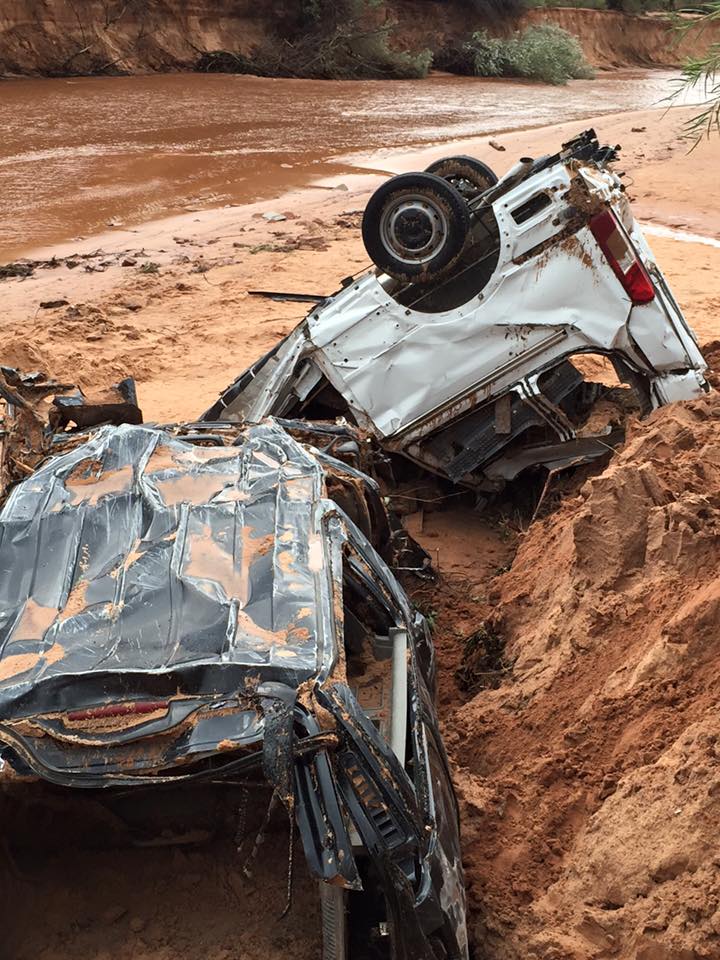 Flash flooding in the Hildale area has overturned cars and damaged the area along State Route 59, according to the National Weather Service.

The flooding has impacted several areas in the Colorado City and Hildale communities including flooded homes and streets and power outages.

"We're continuing to have rainfall and a lot of moisture coming into the area, so we're going to try to do as much as we can in the windows we've got between these storms," Washington County Sheriff Cory Pulsipher said. "Safety is of utmost concern and that's where the focus is, is making sure we keep all of our volunteers safe."

The National Weather Service said the north fork of the Virgin River in Zion has risen from 42 cubic feet per second to 2,628 CFS in an hour. The east fork of the river near the town of Springdale has risen from 123 CFS to 3,692 CFS.

FOX 13 News viewer, Tabitha Corry, submitted photos of flooding on U.S. Highway 89. Corry wrote in an email that around 5 p.m. there were cars off to the side of road with water up to the doors.

The video below was submitted by Guy Timpson. It shows flood waters pushing a car down the road into a bridge.

Video below shows rescue crews helping a family get out of their vehicle stuck in flood waters. Video is courtesy of Chris and Lydia Wyler.

“Elaine and I send our prayers for the victims of the Hilldale Flooding and their families, and to the emergency responders as they continue to search for those missing. I am in contact local officials to offer my support, and I'm certain this tragedy will be met with courage and resilience by the citizens in the communities affected.”

“I am heartbroken to hear of the recent tragedy in Washington County. The State of Utah has offered its full resources to the town of Hildale to aid with the search and rescue effort. The Governor’s Office and the Dept. of Public Safety are in close communication with local government and public safety officials in the affected area. Jeanette and I express our sincere condolences to the families of the victims during this difficult time. I offer my thanks to first responders, volunteers and other officials involved in the recovery effort.”