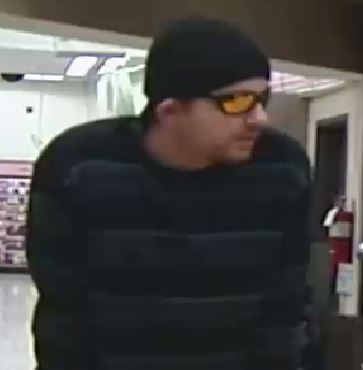 KAYSVILLE, Utah —Police are searching for a suspect in an armed robbery in Kaysville that led to lockouts at several nearby schools Monday morning.

Police responded to a Walgreen’s, 210 N. Main Street, at about 8 a.m. Officials say a white man entered the store and passed a note to the pharmacy clerk demanding controlled substances.

Police say the suspect indicated he had a weapon, however no weapon was displayed. The pharmacy clerk complied and gave the suspect an undisclosed amount of controlled substances.

The man then left the Walgreen’s on foot. No injuries were reported.

Officers were placed at entrances of the schools to monitor and assist students that were already on their way to school. The lockout was lifted shortly after it was put in place at 9 a.m..

Davis School District officials alerted parents to the lockouts via automated phone calls and email messages. However, some parents were unhappy with how long it took the school district to notify them.  Some of the elementary school students were still being dropped off around 8:45 a.m. which was when the lockout was happening.

School district officials said they responded as fast as they could.

“Sometimes we can’t be as quick as a parent wants us to be, but we have to be accurate and we have to be kind of pause and say is this information what we want to communicate,” said Chris Williams, the Davis County School District Community Relations Director.

One parent, Travis Clemens, told FOX 13’s Danica Lawrence he and his neighbors were trying to drop off their kids and got confused.

Clemens wrote a message on Twitter to FOX 13 stating in part, “around 8:40 we dropped off the kids they ran inside when normally they line up outside. A teacher said they were on lock-out but wouldn’t say why.

“Our main concern is the safety of the children and the community at large since he (the alleged armed suspect) left on foot and he reportedly had a weapon. We wanted to make sure he didn’t seek refuge at the school, bring any children in harms way,” said Lt. Kenton Pies with the Kaysville Police Department.

The suspect is described as a white man with red-blond hair and a goatee. He was last seen wearing a black beanie, black pants and a gray sweater. He was also wearing sunglasses with yellow lenses and black shoes.

Please contact the Kaysville Police Department if you have any information on this case. Its number is: 801-546-1131.

There are more details below:

Due to an armed robbery in Kaysville this morning, area schools were placed in a lockout. The lockout was lifted at 9 a.m.