UPDATE: The day after news media distributed information about a pair suspects in a string of car thefts at UTA Park n Ride lots, a Utah Transit Authority spokesman stated "tips from some viewers just led to the arrests of both car theft suspects."

The suspects have not yet been identified.

SALT LAKE COUNTY, Utah – The Utah Transit Authority has released several photos of suspects believed to be responsible for at least a dozen car thefts from UTA Park n Ride lots, and they are urging patrons with early model Japanese cars to take extra steps to protect their vehicle.

According to a press release from the Utah Transit Authority, the two suspects pictured above are believed to be operating a car theft ring targeting UTA Park n Ride lots on the Red and Blue lines from Ballpark Station to the end of the lines.

The two suspects are allegedly targeting Honda model vehicles from the late ‘80s to the early 2000 model years. The suspects are using “shaved keys” to enter and start the vehicles, “in the same time it takes for the actual key to be used," according to UTA.

These thieves may think their strategy is keeping them under the radar, but Lt. Gary McGrath of the UTA Police has a message for them.

Nancy Meas parks her car in a UTA Park n Ride lot every work day, so she was disappointed to learn that cars like hers are being targeted in these very lots.

“It makes me not want to park here anymore," she said. "That’s too bad. I didn’t realize that, but I would think this stop is safe since the Salt Lake police is right here."

UTA police urge anyone who leaves an early model Japanese vehicle in these lots to use a “club” type device to secure their vehicle. A club device is a mechanical steering wheel lock secured by a key.

Anyone who recognizes the suspects or who has knowledge of their whereabouts is asked to call UTA’s tipline at 801-287-3937.

UTA also states in the press release they, “want criminals to know that our lots are not the place for them to target as they are monitored by video and we have a remarkable record of enforcement. UTA Police have made five arrests for car theft over the past year.” 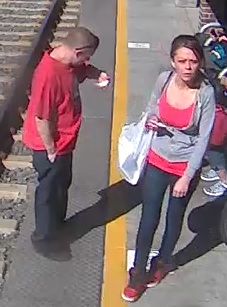