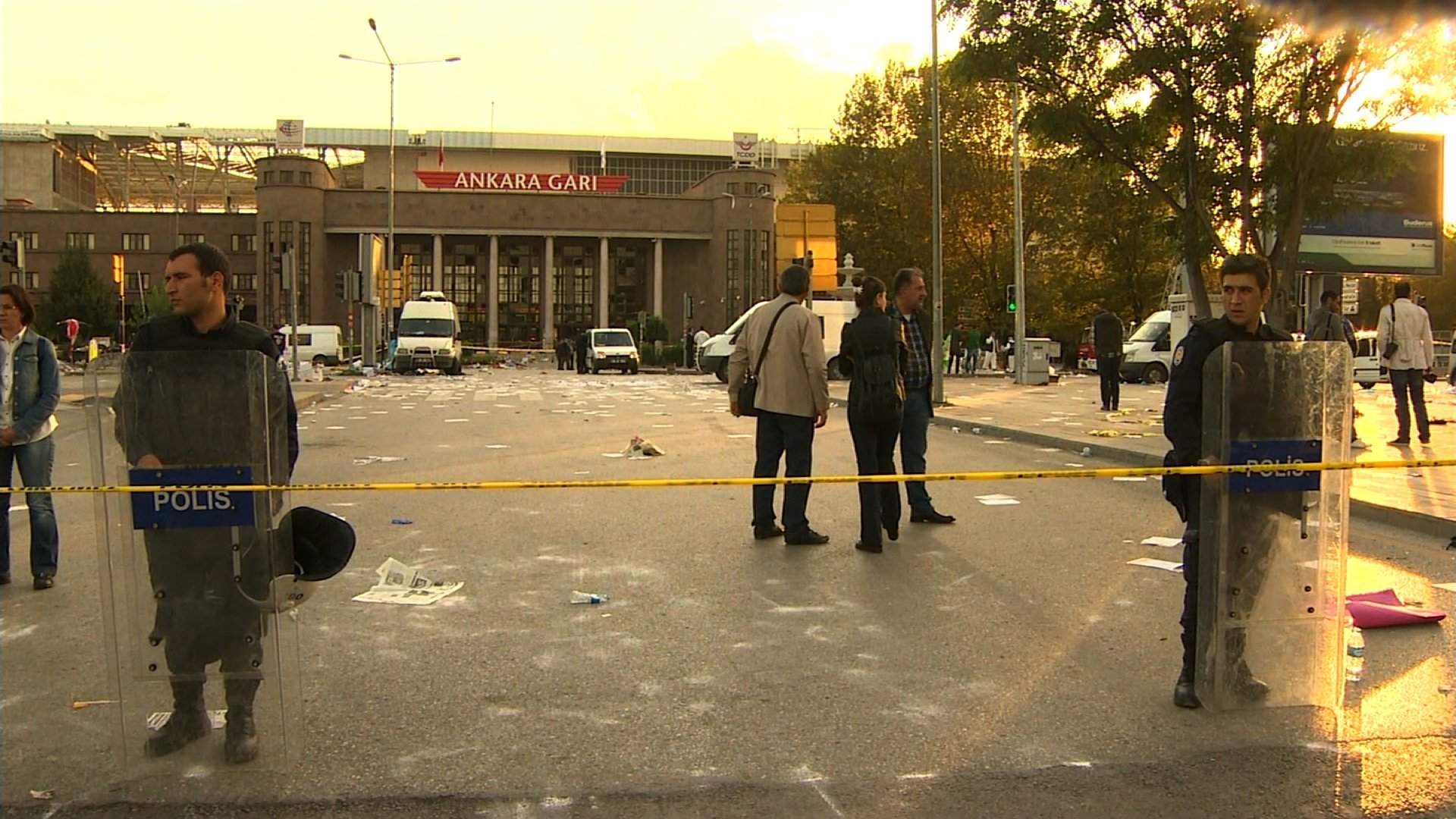 (CNN) — Two powerful bombs exploded near the main train station in Ankara on Saturday morning, targeting a peace rally and causing carnage, killing at least 97 people and injuring more than 400 others in the deadliest attack in the Turkish capital in recent memory.

The explosions, which caused chaos and bloodshed, took place during a peace march involving, among others, the pro-Kurdish HDP, or People’s Democratic Party.

The casualties, reported by the interior ministry, consisted primarily of people gathered outside the main train station to attend a lunchtime demonstration to call for an end to the renewed conflict between the Kurdistan Workers Pary (PKK) and the Turkish government.

About 14,000 people were in the area. Two suicide bombers are believed to have caused the blasts, Turkish Prime Minister Ahmet Davutoglu said in a televised address to the nation.

“In total 97 people have been murdered, 68 of them died right after the blast, whereas 29 of them were severely wounded and sent to the hospitals, where they lost their lives,” said Dr. Huseyin Demirdezen, a member of head council of Turkish Medical Association.

The attack came before national elections, scheduled for November 1.

A video on social media shows a ring of young people dancing and singing before an orange blast erupts in the background. The video ends with the crowd running away from the blast.

Following the attack, for which no group has claimed responsibility, bodies lay in front of the station on Hipodrum Street and paramedics tended to the injured as a police helicopter circled overhead.

Video showed bodies strewn on sidewalks, with injured people lying on the ground with bystanders trying desperately to help them.

Protest banners and flags littered the ground. Members of the public helped carry the injured to ambulances and buses to take them to hospital.

The blasts were so powerful they shook high-rise office buildings at some distance. The death toll is expected to climb.

A newly aggressive stance toward ISIS

No group has claimed responsibility for the attack yet, though suspicion immediately fell on the ISIS terrorist group, or on Kurdish separatists in Turkey.

Davutoglu called for three days of national mourning and urged the country to fight terrorism.

“This is an attack that does not target a specific group; it is an attack on the entire nation and (an) attack on our unity. Turkey is a country that has managed to maintain peace in the region,” he said.

Turkey has avoided conflict with ISIS, perhaps in exchange for the release earlier this year of dozens of Turkish hostages seized in the Iraqi city of Mosul. The quid pro quo of that deal has never been announced.

However, Turkey recently changed its stance and allowed the U.S. to launch strikes on ISIS from the Incirlik Air Base in southern Turkey.

The U.S. condemned the attack and urged Turkish citizens to “recommit to peace and stand together against terror,” a State Department spokesman, John Kirby, said in a statement.

There was no initial word on who might have been responsible. CNN national security analyst Peter Bergen said there was nothing about the attack that would point to one group over another.

“I think that from what we know, it appears to have been a suicide bomber,” Bergen said. “Both groups have deployed these in the past.

“I will say that when we’ve seen ISIS attacks, they have tended to be in the border region along the Turkish/Syrian border. This is of course in the capital, Ankara, in the middle of the country, so that’s something to think about. And again, go back to the context of this rally. It was at a rally to protest the war by the Turkish state and Kurdish separatists.”

But some observers had predicted that Turkey might be subject to terrorist attacks because of its newly aggressive stance toward ISIS.

In an interview with CNN in July, Esra Ozyurek, chair of Contemporary Turkish Studies at the London School of Economics, said that attacks in Turkey, or the absence of them, would indicate whether ISIS was being hurt by the strikes based out of Turkey.

“If Turkey’s really hurting ISIS, then there will be attacks,” Ozyurek said.

But, on the Kurdish front, a peace process last year appeared close to reaching an agreement.

However, when the party of President Recep Tayyip Erdogan failed to win many votes in Kurdish areas of the country in June, he appeared to abandon the reconciliation process.

In return, hostilities between Kurds and the Turkish government, which have killed tens of thousands of people since 1984, have been renewed.