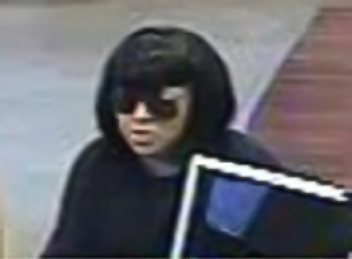 TAYLORSVILLE, Utah — The Unified Police Department is looking for a woman accused of robbing a bank on Monday morning.

According to a press release, the suspect entered the Chase Bank at 5656 S Redwood Rd at about 9:00, gave a teller a note and told the teller to comply and no one would get hurt.

The suspect took an undisclosed amount of cash, then left the bank on foot. Officers searched the area, but were unable to locate her.

The bank teller told police the suspect was wearing “a ton of makeup,” including on her lips, and the teller was unable to ascertain the suspect’s ethnicity.

The suspect was wearing a blue sweatshirt, tan pants, a black wig and large black sunglasses with round lenses.

Anyone with information that may help police is asked to call the Unified Police Department’s Violent Crimes Unit at 385-468-9814.