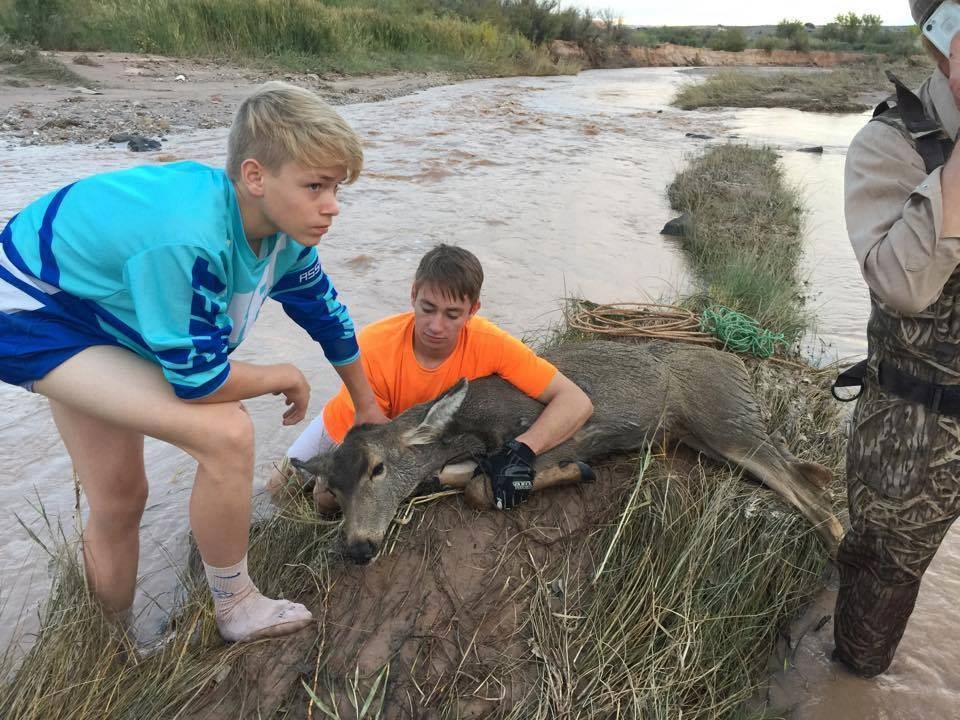 ST. GEORGE, Utah – Two youth in southern Utah took it upon themselves to assist an animal in distress after they saw a deer drowning in the Virgin River, and, though the animal was ultimately put down, a wildlife official commended the boys for their compassion and effort on the animal’s behalf.

St. George News reports Braxen and Ethan Glines came across a doe in the Virgin River near the Mall Drive Bridge in St. George Thursday, and when it appeared the animal was drowning the brothers not only called for help but actually moved into the water to pull the doe to land while help was on the way.

“We just found her drowning in the river today,” Braxen Glines told St. George News, “and decided to run out and get her out of the water and get warm.”

The boys moved the deer to a small island, and they stayed with the animal until Conservation Officer Brian Shearer of the Division of Wildlife Resources arrived to assist just before dark.

“The cool thing is these kids were concerned about it enough that they stayed in that cold water for at least 40-50 minutes for me to get here,” Shearer told St. George News.

Shearer examined the animal, and ultimately he determined the doe’s broken leg combined with it being cut off from its herd meant it had low chances of survival on its own.

Shearer said they manage animal populations rather than individual animals, and this doe had a compound fracture and was hurt so badly he believed it would have died anyway, so he put the animal down. If the meat is found to be viable, Shearer said he anticipates donating it to the Glines family.

Officials urge anyone who sees animals in distress to call wildlife officials or even 911, but they urge people to be very careful about approaching wild animals, as they can pose a danger to humans. When a wild animal allows humans to approach, it is usually a sign the creature is hurt too badly to fight or flee as it normally might do.

Visit St. George News for more on this story, including comments from Shearer about the logistics of managing wildlife populations and the factors that weigh into decisions on whether to rehabilitate an animal or put it down.