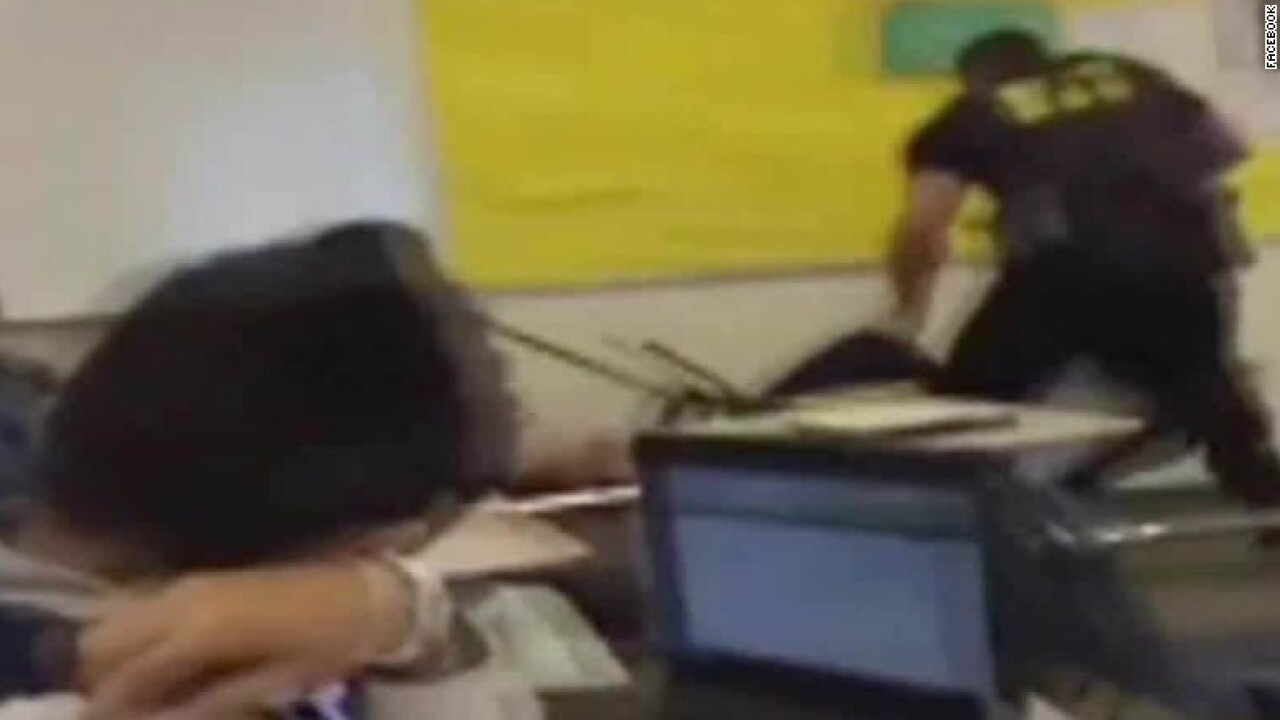 Even without the full context, even without knowing what happened beforehand, the video is appalling.

It shows a South Carolina school resource officer yanking a student from her desk, causing her to fall backward in her chair. He then throws her several feet across the floor.

Other students sit silently, with one student covering his face with his hand.

But the outrage was raucous on social media, with some calling for the officer’s firing.

The incident started when a teacher at Spring Valley High School in Columbia told the student to leave the classroom, CNN affiliate WIS reported. When the student refused, the school resource officer — Richland County Sheriff’s Deputy Ben Fields — was called in.

It’s not clear what happened immediately before the cell phone video starts recording. But when it does, the school resource officer is heard telling the student to get up from her desk.

A school district in South Carolina is investigating the actions of school resource officer Sr. Deputy Ben Fields, after video circulated widely on social media Monday showing him violently removing a student from her desk.

“You’re either going to come with me, or I’m going to make you,” he says.

The student doesn’t budge. Fields tells her, “Come on, I’m going to get you up,” and tries to pull her from the desk.

She falls backward in her chair, but the officer doesn’t stop. He lifts her body slightly off the ground and hurls her several feet across the room.

“It literally makes no sense, as I’m looking at it, why he would escalate to that point — pick her up, pick up the chair she’s in, the desk she’s in, and toss her,” Klinger said.

“There may be some logical explanation, but I can’t see it.”

“I don’t care what this kid supposedly did. She’s a kid,” Charles Clymer tweeted. “Did she threaten his life? No? End of discussion.”

Julia Carmel wondered what would have happened if there was no video footage.

“When a cop can be as violent as the #AssaultAtSpringValleyHigh video in front of classroom audience, I fear what he’d do w/ nobody watching,” she tweeted.

“He has questions like everyone has — and he wants answers and once he has those answers, he will address them,” Wilson said.

Fields has been placed on administrative leave. The school resource officer has been told not to return to school pending an investigation by the department.

But Stephen Gilchrist of the Richland Two Black Parents Association said he wants an independent investigation.

As for the student, she faces a charge of disturbing schools and was released to her parents after the incident, Wilson said. He said another female, who might not be visible in the footage, was also arrested for disturbing schools.

No one was injured, the sheriff’s department said.

James Manning, chairman of the board of trustees for Richland School District Two, said he was alarmed by what he saw.

“I have watched the video several times and there is no doubt that the video is extremely disturbing,” he said in a statement.

“As the parent of a daughter in Richland School District Two I can assure you that we are taking this matter very seriously. The district superintendent has been in constant contact with the Richland County Sheriff to express our concern over this matter and the district has banned the deputy in question from all District Two property.”

Analyst: The officer was within his rights

CNN law enforcement analyst Harry Houck said while the video “looks really bad,” the officer was legally allowed to use force on the student.

“Yes, he can do that because you failed to comply,” said Houck, a former New York police detective. “You are under arrest, you’re failing to comply now. So the officer can use whatever force is necessary to effect an arrest.”

He said the officer probably shouldn’t have been called in to deal with the student in the first place.

“Cops are at a school in the event a crime is being committed,” he said.

“Too often, these teachers in these schools are calling on the cops because they have a disruptive student in the classroom. This is not a cop’s job.”

Fields did not immediately respond to CNN’s request for comment Monday night. But court documents and a sheriff’s department newsletter offer a study in contrasts in his career.

The officer was a subject of two lawsuits in the past decade.

In the first case, Fields was accused of excessive force and battery in a 2007 lawsuit. A jury ruled in favor of the officer.

The second case is scheduled to go to trial in January. Fields is one of several defendants listed in a suit filed by a student against the school district over his expulsion.

Fields has also received commendations for his work in schools. He was given a Culture of Excellence Award by a Richland County elementary school where he worked as a school resource officer in 2014.

“Ben has been working for the Richland County Sheriff’s Office Department since 2004 and joined the School Resource Officer Program in 2008,” a sheriff’s department newsletter said.

“He is assigned to Spring Valley High School as well as Lonnie B. Nelson Elementary School, and has proven to be an exceptional role model to the students he serves and protects.”