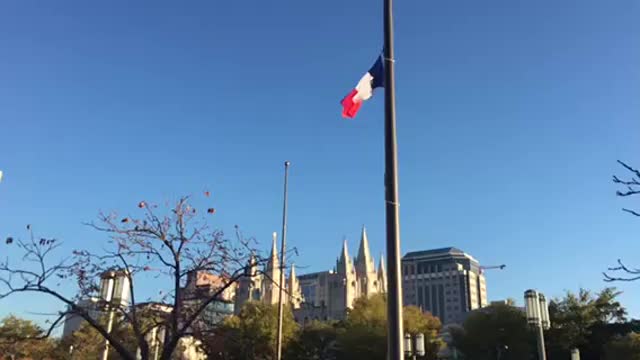 SALT LAKE CITY — In light of the Paris attacks, the First Presidency of The Church of Jesus Christ of Latter-day Saints released the following statement Saturday afternoon:

“With people around the world, we mourn today as we consider the horrific tragedies that have occurred in Paris. We pray for those affected, for their families and loved ones, for the leaders of nations and most especially for the people of France as they struggle to recover from the violence and loss they are feeling so deeply. We have directed that flags on Temple Square be flown at half staff, and that the French Flag be flown here as an expression of our love and support for them. In these hours of uncertainty and despair, we ask members of the Church everywhere to join with us in our prayer that the peace of the Savior Jesus Christ will provide comfort, healing, understanding and hope.”

CNN reports the coordinated attacks took place in six locations throughout Paris late Friday, including a theater, the Stade de France and at least two restaurants.

The Paris Police Prefecture confirmed a death toll of at least 128, down from the 153 previously reported. They also confirm 180 people were injured.