At about 7 p.m., Salt Lake City International Airport received information that Air France Flight 65 was being diverted to Salt Lake City due to the threat.

The FBI and Salt Lake City Airport police responded to the scene and the 497 passengers and crew were deplaned and kept in the customs area while a search went underway for any potential dangers aboard the aircraft.

Authorities told FOX 13 News that the plane was in the air for about two hours when the threat came in.

Authorities and bomb-sniffing dogs searched the plane and nothing was found.

Shreeve said the airport's operations were not affected by the diverted aircraft.

Air France flight from LAX to Paris diverted to #SLC due to security issue. FBI, Airport PD on scene. Operations are not effected.

As you may have heard an aircraft was diverted and safely landed at the Salt Lake International Airport this evening. The FBI and it's law enforcement partners take all threats very seriously and respond accordingly. Several law enforcement agencies are working in concert, following established protocol,  to determine the nature of the threats which caused the aircraft to divert.  At this time we have no further information, we will update, to the extent possible, as information is gathered.

Shortly after the Air France flight landed in Salt Lake City, Air France Flight 55 from Washington's Dulles International Airport to Charles de Gaulle Airport in Paris was diverted to an airport in Halifax, Nova Scotia -- also due to a bomb threat, a government source said.

The source did not know if the same person called in both threats.

"Several law enforcement agencies are working to determine the nature of the threats which caused the aircraft to divert," FBI Special Agent Todd Palmer of the Salt Lake City division said.

No U.S. military aircraft were scrambled in either of the reported Air France incidents, NORAD spokesman Preston Schlachter said.

"Diversion of flights are the most draconian response to a bomb threat," CNN national security analyst Juliette Kayyem said. "I think right now we take this seriously until we hear some explanation to the validity of the bomb threat." 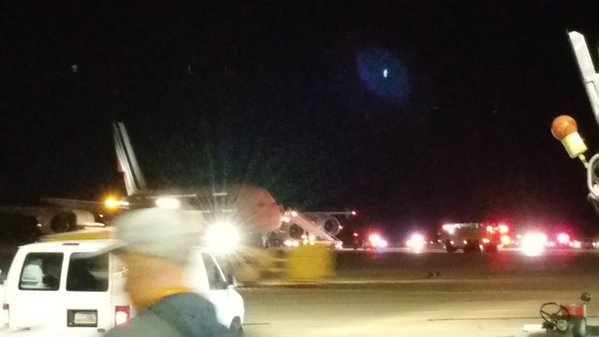 Passenger Trevor Moran was headed to Paris from Los Angeles to shoot a music video on Flight 65.

He said the pilot came on and said the plane had to make an emergency landing.

"There were huge buses when we landed that they loaded us all on," he told CNN. "Everyone on the flight is waiting in this lobby. Nobody knows what's going on."

Ricky Dillon was also on the flight and tweeted a video of what he saw when the flight made the emergency landing.

This is what it looked like right when we did the emergency landing and got off the plane, so many police cars pic.twitter.com/UfGSeeNtWI

Dillon and Moran know each other; Dillon confirmed they were both safe.

Me and Trevor are safe and sound in a hotel now! 🐿

Keith Rosso, who was on the same flight, said he had just finished dinner when the flight staff abruptly took trays away and said the plane was landing due to 'unsafe flying conditions."

Sunset on flight AF65 from LAX to Paris before emergency landing in SLC. pic.twitter.com/ByJ2WNbxab

Rosso said the FBI was interviewing passengers on Flight 65.

As for Flight 55, the Royal Canadian Mounted Police said the plane and luggage will be searched for explosives, the agency tweeted.

Even though the flights landed safely, CNN law enforcement analyst Jonathan Gilliam said there are reasons for serious concern.

"One thing that has to be clear is that we may call this a hoax, but the reality is, terrorism -- which we see going on in France right now, and here -- is a tactic used to affect a psychological or political change on a community, and that is what this is," Gilliam said.

"It may be a hoax, as far as a bomb threat. But this is terrorism."

The bomb threats on Paris-bound flights came four days after a wave of deadly attacks terrorized the French capital.

At least 129 people were killed in an onslaught of bombings and shootings Friday night. French President Francois Hollande declared a state of emergency.

Air France plane surrounded by flashing lights, away from the terminals in SLC. https://t.co/jR8rMtk75W—
(@GregMaxfield) November 18, 2015