COTTONWOOD HEIGHTS, Utah - Fire crews contained a 2-alarm fire at a Cottonwood Heights home Friday afternoon, and the structure is believed to be a total loss.

Authorities were called the home near 1900 E. Creek Rd. just after 2 p.m. Friday.

Firefighters had originally taken a defensive stance on the fire and blocked roads in both directions while they worked to contain the fire. By about 4 p.m. the fire was contained. FOX 13 News' Dora Scheidell was live at the scene, see the video above for her report.

Firefighters initially weren't certain if everyone had been accounted for, so they began a search inside the residence. Later, they received a message indicating all residents were safe and accounted for and not inside the burning structure.

The home is believed to be a total loss. Crews expected to remain on scene for several more hours as of about 4 p.m., and roads remained blocked in the vicinity.

Officials have not said how the fire may have started. 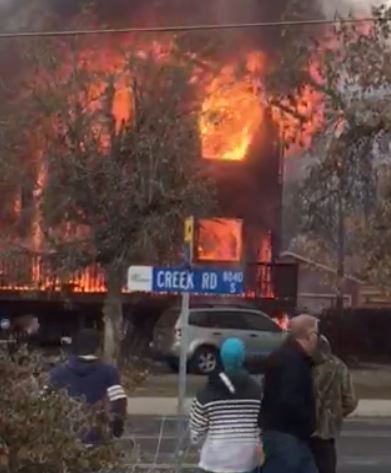