SPRINGVILLE, Utah -- A 2-year-old child was slightly burned in a house fire in Springville Tuesday afternoon.

Springville Fire Department responded to the blaze in a duplex, 833 W. 175 South, at about 2:30 p.m. when a woman called to report her home was on fire.

When firefighters arrived on scene, they immediately called for help from nearby agencies.

While the cause of the blaze is still under investigation, crews think the fire started in the family Christmas tree.

Landlord and former resident of the duplex was emotional as he walked through the charred remains Tuesday evening.

"I started to think about all those moments where like, you know, my son was born and this was his first house – so seeing like his old changing table and things like that it kind of sets in," said landlord Brandon Sistrunk.

Sistrunk was renting the home to a single mother and her three children.

Unable to reach the tenant or the neighbor, Sistrunk jumped into his car in Lehi and started driving for his old neighborhood.

When he arrived, Sistrunk found his house charred, surrounded by fire crews. 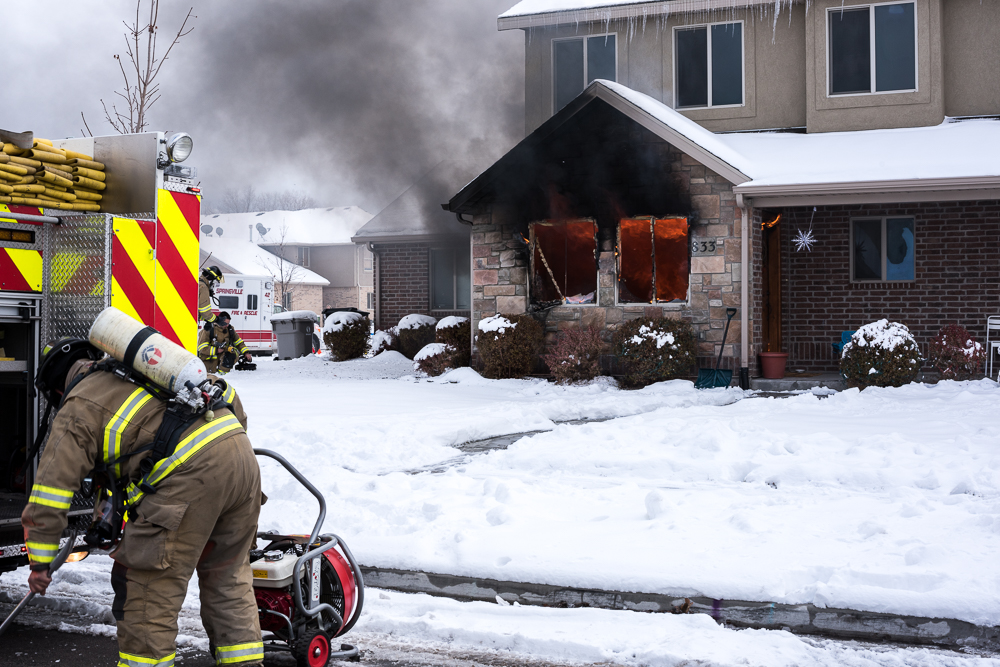 According to a neighbor, the 2-year-old child and mother were the only ones home at the time.

The toddler was asleep in an upstairs bedroom when the fire started.

"The fire spread really quickly, it singed the 2-year-old's hair," said Tessa Langholf, the neighbor living in the adjoining duplex.

Lt. Dave Caron with the Springville police department described the toddler's injuries as 'minor burns.'  While investigators continue to figure out what started the fire, Caron has a warning.  "It's Christmas and if you have trees and presents you have to be really careful."

Springville Fire officials say the flames were contained to the living room but there was a lot of smoke damage throughout the duplex. Officials estimate damage from $60,000 to $80,000.

The mother and her child were taken to Utah Valley Regional Medical Center but are expected to be released.

Provo, Spanish Fork and Mapleton Fire Departments responded to assist in putting out the blaze.

House fire this afternoon in Springville. Christmas tree ignited. Cause under investigation. pic.twitter.com/WepoBaEBX2

One child slightly burned in fire. Remember no open flames or heaters by Christmas trees!