SALT LAKE CITY, Utah - One man is dead and seven others injured after a car hit a TRAX train late Monday morning in Salt Lake City, causing it to derail.

Witnesses recount a horrifying ordeal. Two people were crossing the bridge on North Temple when they saw the car driving at a high rate of speed. He crossed the TRAX barrier and hit the train with people inside.

The driver of the vehicle, 51-year-old Jose Delrio Cabral, was involved in a hit-and-run accident at 200 West and North Temple.

He sped from the scene and went through the TRAX barriers, which were down while train was crossing North Temple and 600 West.

"The vehicle didn't appear to slow down and ended up crashing into the TRAX just about head on and then it derailed the TRAX," Robin Heiden said, spokeswoman for Salt Lake City Police Department.

The train partially went over the North Temple Bridge. The driver died at the scene.

Seven passengers on the train, including the conductor, were taken to the hospital with minor injuries.

"I mean, it really could have been a lot worse," Heiden said. "I mean, you see the damage to the vehicle and it actually derailed this train, so it was a very high impact."

Kaylyn Sharp and Morgan Call were crossing the bridge when the car hit. They rushed to be by the driver's side until paramedics arrived.

"I just went up to him and stood by his side and just put my hand on the back of his head and told him he wasn't alone and just encouraged him to keep breathing," Sharp said.

The driver died moments later. They described the horrifying moment when the train went off the tracks, barely missing them.

"The train came probably about two feet from hitting us," Sharp said. "Because we were crossing the street right as it happened. And it was incredibly terrifying."

Police are still investigating the hit-and-run, as well as what caused the driver to go through the TRAX barriers.

"There was another vehicle that was hit, we believe, by this vehicle, so we believe that started at 200 West and North Temple  and then that vehicle ended up here, so we are investigating that vehicle and a possible other hit-and-run,” Heiden said.

It took authorities time to get all the passengers off the train because when a train derails, they have to deactivate the catenary lines, otherwise, electricity running through the train can injure people.

UTA officials say it will take several hours to get the train up and running again. They have a temporary bus route that is taking people to and from the airport until the area is cleared.

UTA said about 4,500 passengers board the train every weekday. It goes back and forth to the airport. They are optimistic it will reopen by the first scheduled stop Tuesday morning. 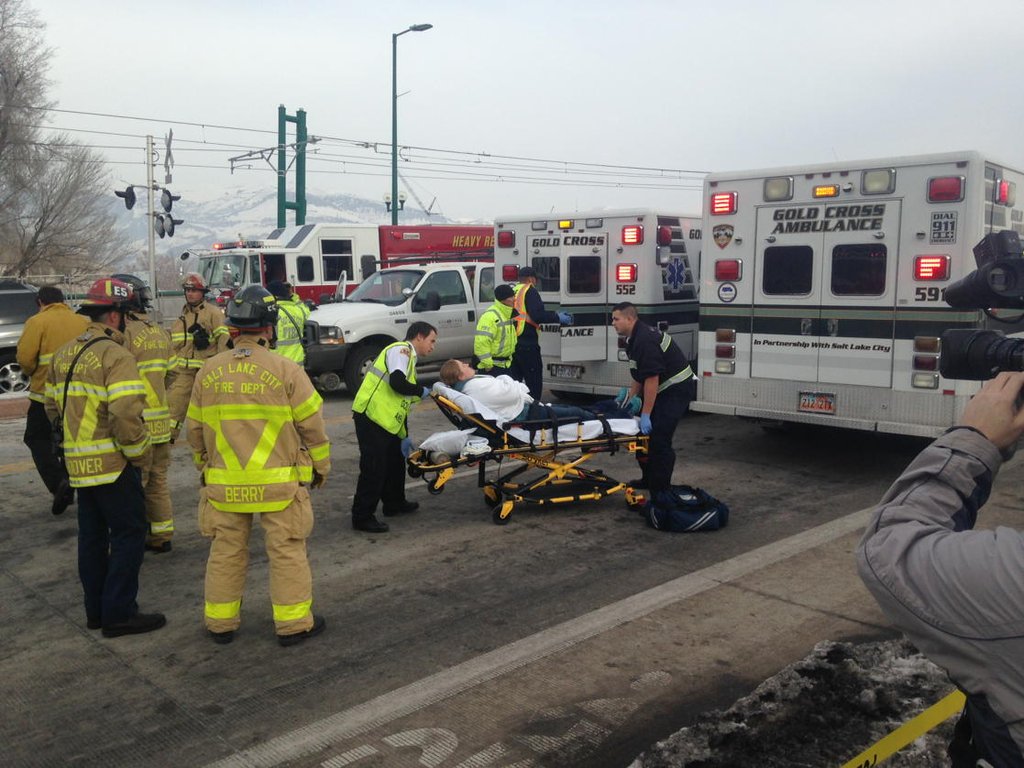 FrontRunner Alert: Due to incident at 600 W there is no FR service at North Temple. Please use Salt Lake Central & Blue Line TRAX.

Crews have responded to an accident at 600 West and North Temple involving a vehicle and TRAX train. Please avoid the area.

TRAX Alert 11:25am: Green line train will be experiencing delays due to an incident. There is a bus bridge from Arena to Fairpark.