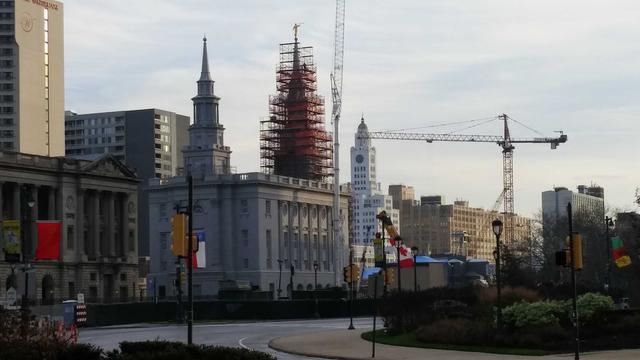 PHILADELPHIA, Penn. — The Church of Jesus Christ of Latter-day Saints reached a milestone in the construction of its first Mormon temple in Pennsylvania.

On Dec. 30, the angel Moroni statue was placed atop the downtown Philadelphia temple’s tallest spire.

“Mormons in our area have been watching for this visible highlight of the construction period,” said Elder Milan Kunz, area seventy and Senior Church leader for the Philadelphia region. “It indicates the temple is nearing completion and it adds a new image to the skyline of the city.”

Moroni was a prophet from the Book of Mormon. The book was translated from golden plates by the Church’s first prophet Joseph Smith and is the cornerstone to the Church’s gospel.

The angel Moroni sits on all Mormon temple spires. The statue is not a figure of worship, but is a symbol of the fullness of the gospel of Jesus Christ, according to church leaders.

Construction plans for the Philadelphia, Penn. temple were announced in 2008 and the groundbreaking was on Sept. 17, 2011.

The temple will serve about 45,000 church members from four states.

Completion is slated for the fall of 2016. It will include an adjacent church building for Sunday worship services and other congregational activities.

“Our temples point us to Jesus Christ,” Kunz said. “These sacred edifices are houses of the Lord and play a key role in strengthening our faith and commitment to follow Jesus Christ and His teachings.”