SALT LAKE CITY -- The story of a 6-year-old girl who was airlifted to a hospital with severe injuries after an accident at a roller skating rink in Delta has captured the attention of thousands around the country, including the Miami Dolphins - who have now sent a care package and a message of support to the young fan.

Tayton Timothy was in an accident at a roller rink where an adult skater collided with her and fell on top of her. She was in a coma and suffered a skull fracture, swelling in her brain and damage to one of her eyes. She also contracted meningitis and a strep infection after the incident.

Tayton is a Miami Dolphins fan, and in a GoFundMe page for medical expenses set up by her aunts, Tayton can be seen wearing a Miami Dolphins jersey with No. 91 across it. Miami Dolphins  defensive end Derek Cameron Wake currently wears No. 91 for the Dolphins, and he sent Tayton a video message thanking her for being a fan and offering his and the team's support.

"Hey, what's going on Tayton, it's Cameron Wake," he says in the video. "I heard about your injury, and obviously we here at the Dolphins want to send you some support. We appreciate all of the support you have for us, and for me personally, and we hope you get well soon. Thanks!"

The team also sent Tayton a care package filled with various Dolphins gear, including a hat, sunglasses and various other items—some of it autographed. See the video above for Wake's message to Tayton and the photos in the gallery below for the care package from the Dolphins.

FOX 13 News spoke with Tayton's father Wednesday, who said all along they've been hoping their daughter would improve.

“I just kept telling myself she'll get better because I couldn't let it be any other way I couldn't think of it that way,” said Justin Timothy, Tayton’s father.

He said he recently saw Tayton open her eyes for the first time in a week.

“Her eyes were opened and I just jumped up and said, 'Yes!' I was so excited, it was pretty awesome,” Timothy said.

The young Dolphins fan has continued to improve.

Timothy said the Dolphins care package came to fruition after a man, who is a stranger to their family, saw the story and reached out to Tayton's favorite team.

“She was excited when we told her: You could see it light up in her eyes,” Timothy said of the package, which the Miami Dolphins say is expected to be delivered to Tayton's home Friday morning.

Click here for more on Tayton's recovery and interviews with her family. 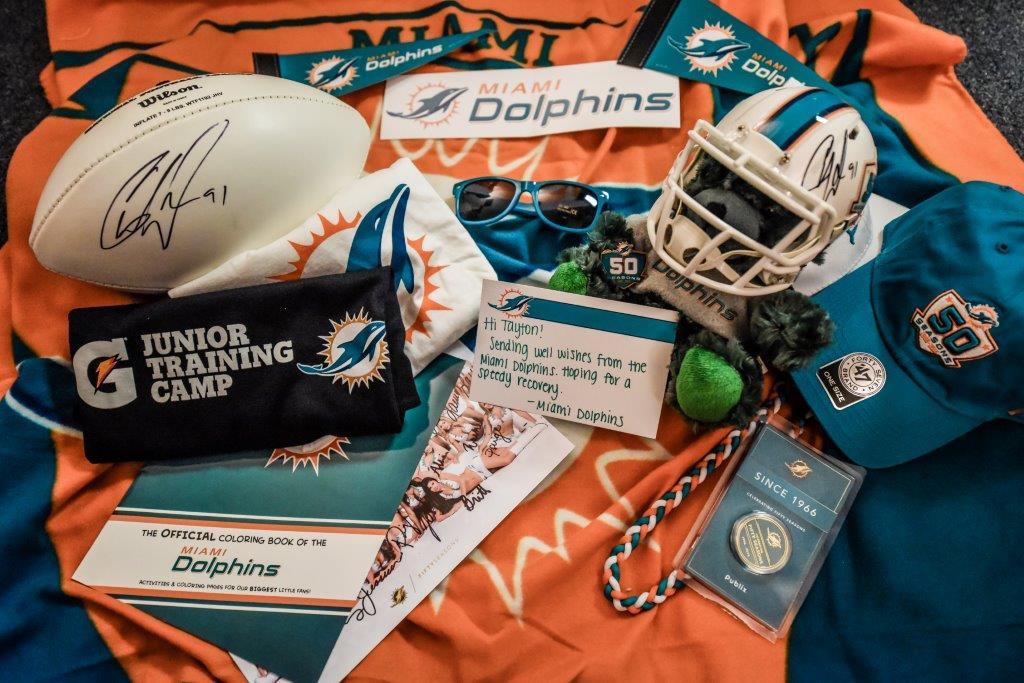