WARNING: The videos and images embedded in this post show the scene of a fatal officer-involved shooting. While the videos are not necessarily graphic, viewer discretion is advised.

SALT LAKE CITY --Exactly one year after a man was shot and killed during an altercation with a Salt Lake City Police Department officer, a former Davis County Sheriff says new video footage indicates the officer's actions may not have been justified.

James Barker, 42, was shot and killed January 8, 2015 after officer Matthew Taylor responded to a 911 call about a suspicious person and an altercation ensued, during which Barker appeared to strike the officer with a snow shovel.

The shooting was ruled legally justified by the District Attorney, but William "Dub" Lawrence, a former Davis County Sheriff who now advocates against police violence, claims the newly released video shows the officer killing Barker after the man was already handcuffed and subdued.

See the video above for the new footage, and click here for the previously released footage from the officer's body camera.

Lawrence and other supporters met with Salt Lake County District Attorney Sim Gill Friday afternoon to discuss the new footage and the possibility of re-opening the case. The meeting comes on the one-year anniversary of the fatal encounter.

"We're going to go back and review our materials that we have and see the context and whether that changes or alters our conclusion," Gill told FOX 13 News after he reviewed the footage presented by Lawrence Friday.

Gill also said the officer, who was previously cleared of wrongdoing in the incident, has now been placed on leave.

The photo gallery below offers a zoomed-in look at several still images from the video, and those screen shots were captured during the moments from the footage when Lawrence and others claim the officer was firing on Barker. The clip below shows a zoomed-in look at the video footage from that same moment. Lawrence said there is an audible series of "pop" noises that they believe are gun shots. 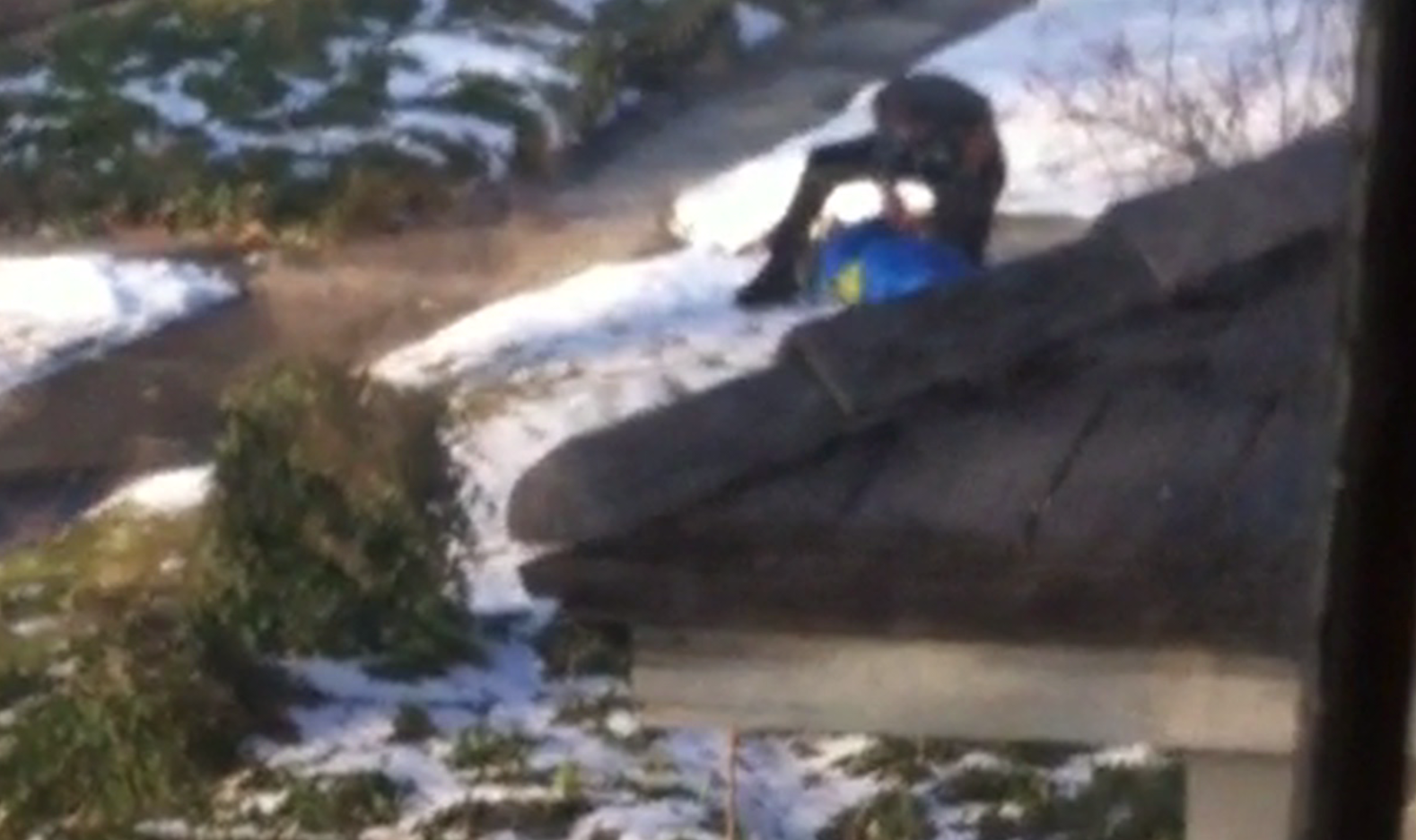 Attorney Robert Ruben is representing Barker's family, and he said he believes the video shows Barker being shot while on the ground.

"It appears the officer, contrary to what was told in the report, was actually crouched over the deceased and shot him point-blank range three times," Ruben said.

Lawrence said they only become aware of the new footage in November, when they received a lower-quality version. After obtaining a higher-quality version of the footage, they reached out for a meeting with the District Attorney.

"The Salt Lake City Police Association stands by Officer Taylor 100% and we are confident in the initial investigation of the James Barker incident. We have full confidence the supplemental investigation will confirm the original justified ruling. It is our belief Officer Taylor did not shoot James Barker while he was handcuffed. We appreciate any evidence anyone can bring forward, however, to speculate regarding a conspiracy theory is both irresponsible and unproductive."

The incident began with a 911 call about a suspicious person. That caller reported Barker was carrying a snow shovel and knocking on doors, offering to shovel sidewalks for money. Click here for audio from that call.

Because there was little-to-no snow on the ground, the caller felt the man's actions were suspicious and reported it. Police said neighbors reported they thought they had seen the same man in the area the day before, looking inside people's vehicles.

Body camera footage from the incident released the day after the shooting shows the officer approaching Barker in the vicinity of a front porch. The officer asked Barker what he was doing, and Barker explained he was trying to make money shoveling snow. After the officer pointed out the lack of snow and said the neighbors had reported the activity as suspicious, the officer asked for Barker's name.

The video shows Barker grow increasingly agitated, and he shouts at the officer and tells the man to go back to his car. At one point, Barker gestures emphatically at the officer, who appears to respond by pushing Barker away from him. At that point, Barker lifts the shovel over his head and moves toward the officer, swinging the implement.

There are several beeps as the camera's point of view tumbles toward the ground, which is where the video ends. Police said the camera was disabled in the altercation, but Friday, former Salt Lake City Mayor Rocky Anderson, who is involved with the push to re-examine the case, told FOX 13 they believe the camera was intentionally turned off by the officer, citing a clear beeping noise followed by a standard, 3-second delay--which he said can be heard just before the shovel swings downward.

A witness told FOX 13 News at the time of the shooting they saw the two men fighting, and he then saw the officer shoot Barker three times.

The fatal shooting was ruled legally justified by the Salt Lake County District Attorney's Office. Sim Gill said that officer Taylor initially did not resort to lethal force, and only used his firearm after realizing the man's heavy winter clothing would prevent a Taser, which requires skin contact, from functioning.

In his original ruling on the shooting, Gill said the officer was repeatedly attacked.

"Usually in such altercations the person may assault an officer and run away -- that he continued to persistently attack and at one point as the struggle ensued, he felt that somebody tugging on his gun and of course that gave him greater concern," Gill told FOX 13 in 2015.