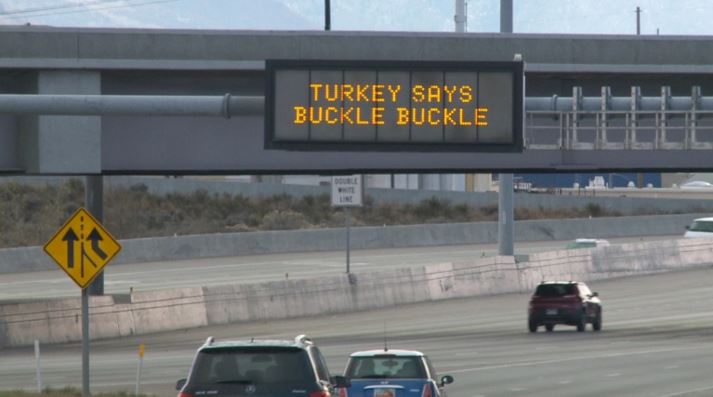 SALT LAKE COUNTY, Utah — “Your car is not a phone booth. Just drive.”

“Texting and driving leads to the dark side.”

These are just a few of the messages the Utah Department of Transportation has posted on its electronic message boards above the freeways as part of its “Message Monday” campaign.

UDOT started the campaign last May during the start of the “100 deadliest days of summer.” The campaign was so popular officials decided to keep it going.

Now, UDOT is asking Utah drivers to contribute after hosts at radio station ALT 101.9 came up with creative phrases to put on the electronic billboards during a Monday morning show.

ICYMI: Think you're crafty enough to create a #messageMonday sign for UDOT? 3 lines, 17 characters a line.https://t.co/qUWEFPXgqY

“This is just one of the things that we decided to try,” said UDOT spokesman John Gleason. “The messages are a little bit more lighthearted. They’re not typically what you’d expect to see on a freeway, but that’s really kind of the beauty of that.”

The first idea that came out of the show was “snow down, slow down.” That phrase could be seen on billboards above freeways Monday.

Do you have any ideas? Email them to messagemonday@utah.gov. Messages must be 17 characters per line, three lines maximum.

Happy #StarWars day! While The Force is strong in Utah, please do all in your power to be safe. #messagemonday pic.twitter.com/bEqa9Rrgcm