HOLLADAY, Utah – A police officer was shot and killed while responding to a traffic accident in Holladay Sunday, and the suspect who shot him also wounded another officer before being fatally shot a short distance from the first alleged crime.

Officer Doug Barney was shot and killed in Holladay January 17 as he responded to a traffic accident. Image courtesy Unified Police Department.

Salt Lake County Sheriff Jim Winder identified the deceased officer as 44-year-old Douglas Scott Barney, an 18-year veteran of the Unified and Taylorsville police departments and a father of three who worked in the Holladay Precinct.

Barney was responding to a traffic accident at 4500 South and 2300 East at about 9:51 a.m., where a man and woman were observed leaving the scene of the crash after fleeing from one of the vehicles involved.

Winder said as Barney approached the pair in the area of 4400 South and Lynne Lane, the male turned and fired at Barney, striking him in the head. Barney was taken to a hospital, where he died of his wounds shortly after 1 p.m.

"There was a police officer shot, and laying in my driveway, so I got really upset about that," he said. "But they were treating him, they treated him for quite a little while, and I kept waiting for the ambulance to show up, and finally it showed up. And they put him on a gurney, and I seen him move when they put him on the gurney, so he left here alive. He must have died at the hospital."

Butcher said he feels deeply sorry for the officer's family.

Other officers responding to the area encountered the pair a short distance away, at about 2167 East 4500 South, around 10 a.m., and Winder said gunfire erupted “immediately” as the male suspect fired on officers, who returned fire.

Another UPD officer, 51-year-old Jon Richey, was hit by gunfire and was taken to a hospital. Richey was transported in serious condition, and in a press release sent around 6:30 p.m. police stated his condition is improving.

The male suspect was killed. He has been identified as 31-year-old Cory Lee Henderson. The female he was with fled the scene, and so far she has only been identified as a white female with blonde hair. Police said they believe she may have fallen at some point during the incident and may be hurt.

Police have been searching the surrounding area Sunday for the female, who they initially referred to as a suspect and then later as a person of interest, and they were asking people to avoid the area and residents already in the vicinity to remain in their homes. Police from multiple agencies are involved in the search, and K9 units and a helicopter have been observed assisting.

Authorities said later Sunday they want to speak with the woman about what happened, but they said they don't believe at this time that she poses a danger to the public.

Gov. Gary Herbert, Salt Lake City Mayor Jackie Biskupski and first responders around the state all expressed their sympathy and support for Barney and Richey, click here for their statements.

Sometime after the shooting, around 1:45 p.m., a woman and man claiming to be the mother and brother of the suspect who was killed drove up to the scene where the shooting occurred. Police at the scene said the pair were taken into custody after being uncooperative, during which police used a Taser while subduing the suspect's apparent brother. 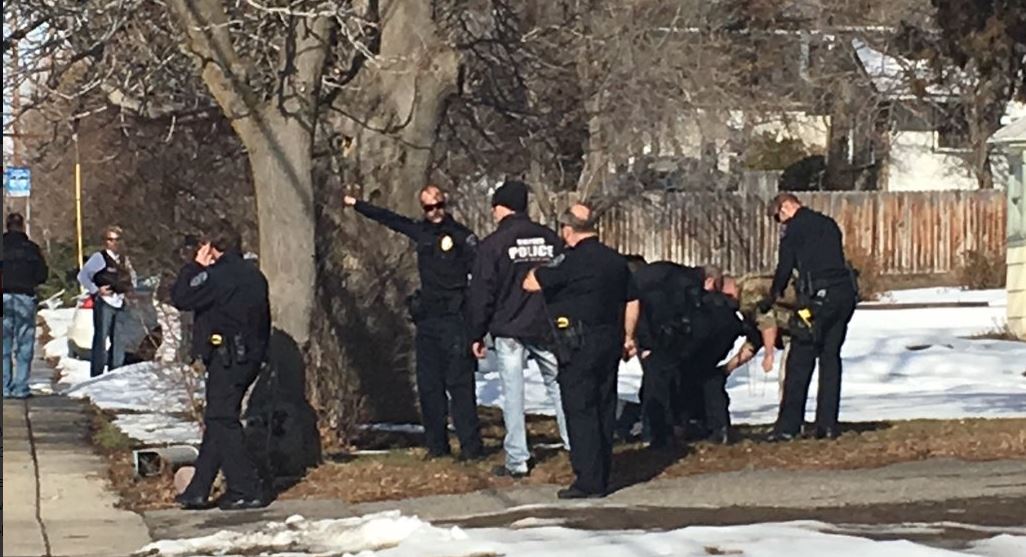