WEST VALLEY CITY, Utah - With the sun struggling to break free of the clouds, Officer Doug Barney was laid to rest at the Orem City Cemetery, Monday afternoon.

Thousands of people attended the funeral of fallen Officer Douglas Scott Barney who was killed by a fugitive while responding to a car accident earlier this month.

"I, my family and most everyone I've member I've talked to were moved beyond emotions.  I'm just stunned," said Sheriff Jim Winder from Unified Police Department.

Winder said it is not just the loss of a friend that has moved him so deeply, but the outpouring of support the community.

Flags lined along procession route from West Valley City, through Holladay and down to Orem.  Along the way Winder said people came out to wave or hold up signs of support.

"To see the way a community backs there officers is absolutely unbelievable. I've never seen anything like it before," said Officer Christopher Stuckey from the New York City Police Department.

Stuckey worked Sunday night before hopping a flight to Salt Lake City to be at the funeral.

More than 1,000 gathered at the cemetery. Called to attention, a silence fell over the crowd as Barney's casket was taken from the hearse and walked up to the burial site.

With a flag draped over the coffin, a long standing tradition among law enforcement was honored.  Last call, a final radio call to an officer lost in the line of duty.

A dispatcher over the radio was heard saying:

"All units be advised, Holladay ten, 18 year veteran Officer Doug Barney was killed in the line of duty on January 17th, 2016... Doug you will be missed by all.  God Bless you and your family. Officer Doug Barney is now 10-42.  We have the watch from here."

Barney, 44, was an 18-year veteran of the Unified and Taylorsville police departments.

Benefit accounts have been created on behalf of the Barney and Richey families.

Those wishing to donate can do so at America First Credit Union under the Doug Barney Memorial Account and the Jon Richey Charitable Account or contact AFCU at 1-800-999-3961. 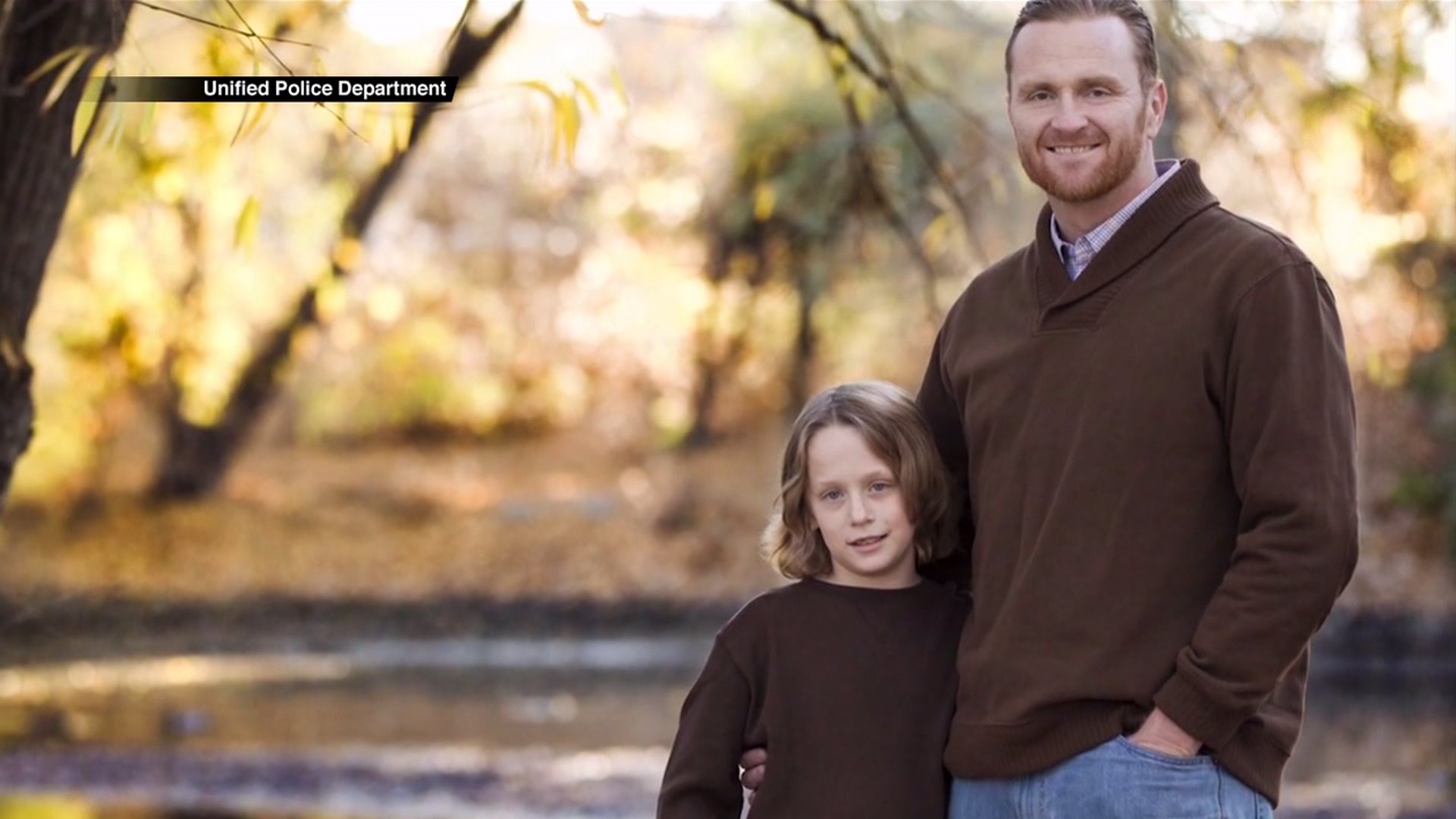 The sun breaks from behind the clouds to shine on the funeral site of #OfficerBarney. pic.twitter.com/PnrGP9gcEK

Officer Douglas Barney, 44, was killed in the line of duty on Sunday, January 17, 2016, while trying to question a man who seemingly had done nothing more than leave the scene of a traffic accident. An 18 year veteran police officer, Doug loved law enforcement and interacting with the community. Doug was perfectly suited to law enforcement, never able to sit perfectly still, always eager for something exciting, and relating to other people in a down-to-earth, sincere way.

Doug was born June 3, 1971 on a military base in Taiwan to Douglas Scott and Darlene Heinz Barney.

Doug was raised in Anaheim, California, and worked at Disneyland as one of his first jobs. He attended Clara Barton Elementary School and Loara High School. He played water polo and was on the high school swim team. Just before his senior year, his family moved to Orem, Utah where Doug graduated from Orem High School. He loved the move to Utah and being able to ride dirt bikes daily in the hills behind his family home. After graduation Doug worked a series of jobs, mostly in the auto mechanics field like his father. He loved working on cars and raced his cars a couple of times at the old Bonneville Raceway.

Doug and his wife, Erika, grew up near each other in Anaheim and he liked to tell stories of how he had always had a crush on her. When Erika moved to Utah to attend BYU they continued their friendship and he tried his hardest to get her to commit to dating him (she had a habit of inviting her roommates along when he asked her out for pie.) In 1995 he showed up to her apartment unexpectedly and asked her to marry him. He asked again every day for several months until she finally accepted. Doug married Erika Gilroy on February 17, 1996 in his family home in Orem. Their marriage was later solemnized in the Jordan River Temple. Doug passed away one month before their 20th wedding anniversary.

After their wedding Doug told Erika that although he loved working on cars, it was a bit too lonely of a type of work for him. He didn’t like being underneath the cars by himself all day long and would tend to move around looking for conversations with other mechanics. He admitted to his wife that he had always wanted to be a police officer and, with her blessing, began applying with different agencies. Doug was hired as a corrections officer with the Salt Lake County Sheriff’s Office in December of 1998 and one year later was hired as a patrol officer. He worked primarily in Kearns and Magna, Taylorsville City, and Holladay City during his career. Doug earned a bachelor’s degree from the University of Utah by taking two classes a semester while working full time to support his family. His degree was in Sociology with a Criminal Justice certificate.

Doug is survived by his wife, Erika, their three children, Matilda 18 (Matti), Meredith 16 (Merri), and Jacob 13 (Jack). He is also survived by his mother, Darlene, and his three siblings and their spouses, Tammy (Jason), Russell (Heather), and Brian (Jennifer). He was preceded in death by his father, Douglas Scott Barney. Between Doug’s and Erika’s siblings there are 23 nieces and nephews who love Doug, and each are pretty sure they are his favorite. Doug had a special way of relating to children and loved to hold them, tickle them, and incorrectly guess their age. His church family knew it was his habit to come to church and look around for someone with a new baby to sit near, with the hope that the baby would get fussy and they would let him hold it.

Doug was a devoted husband and father who loved spending time with his family and talking about them when he couldn’t be with them. He loved teaching his kids how to shoot guns, appreciate cars, and the basic approach to a few defensive control techniques. He loved music and listened to every conceivable type of music. For years he kept a cassette tape keyed up in his patrol car to Kenny Rogers’ Long Arm of the Law, which he would sing loudly when a prisoner seemed especially sulky on the way to jail. The end result was usually that they would come into the jail laughing together.

Doug was well known for his boisterous personality. He was larger than life in every way. He was very funny and was often able to diffuse a tense situation with a perfectly timed joke. It is very hard for a criminal to consider violence while laughing. Doug’s law enforcement brothers remember him for his signature greeting of, “hey, brotha!” or “hey, sista!”, and an almost knocking-the-wind-out pat on the back.

Doug struggled with bladder cancer and the side effects of treatments and surgeries for many years. He was frustrated by the time it took him away from work and from his family, but had an amazing ability to stay positive and upbeat and even lighthearted about the challenges. His only desire, always, was to be able to get back to work and to take care of his family. Doug will be forever missed.

The family would like to thank the community, both locally and nationally, for the outpouring of love that has been given this week.