SALT LAKE CITY -- "If you want financial freedom, if you want to travel, if you want to be flexible with your life, this is absolutely for you," said Juliana Duran, standing outside of the "tiny home" she built four years ago at the age of 19.

Duran had been paying $1,000 each month in rent for an apartment in Park City when the idea come to her.

"If I could put that towards something that I own myself, I could put myself in financial freedom," she recalls.

She held a yard sale, turning material goods into liquid cash for her tiny house project.

Her shoe collection is now stored in a tiny cabinet on the exterior of her tiny house, where every inch of space inside is essential.

"It's 140 feet downstairs, and I have an eight-by-eight foot loft upstairs, so total it's about 190 square feet," she said, adding "I have everything I need in my tiny house."

The house has 11 windows, including a skylight, and a vaulted ceiling, all of which help the 7-foot wide structure feel more roomy than one might expect. (See the gallery at the bottom of this post for more photos of this residence and the other tiny houses.)

At one end of the home is a kitchen with a small traditional oven, a refrigerator and a microwave oven. With minimal cabinet space, Juliana's four pots and pans dangle together in the air above a small counter.

A door off the kitchen opens to the house's only completely private room, a bathroom with a full-sized toilet and a shower.

"I made sure the shower had enough room for me to lift my arms," Duran said.

In the living area, a small sofa doubles as storage space. When the seat is removed, it reveals a box-like structure below.

A small ladder ascends to the loft, which is Juliana's favorite place in the tiny house--even if she can't completely stand up.

"I have a queen-sized mattress," she said. "I have a flat screen TV that hooks up to my computer, and I have some Christmas lights to make it more vibrant and fun, and storage for my magazines."

Juliana's tiny house has its own Facebook page, where she shares tips on tiny living and networks with other tiny house owners.

But having lived tiny for four years, she's recently run into a not-so-tiny snag: the land her house sits on in Summit County is up for sale and her lease is up. The power pole she paid $2,000 to have installed will stay behind, and her house will be rolled away at some point, hopefully by a new owner.

Juliana plans to use money from the sale of the home to buy land where she will begin again, building another tiny home, never to be moved.

Cities and counties all over Utah are grappling with where to allow tiny homes, particularly near downtown Salt Lake City--where urban singles create demand.

"We've got workers, restaurant workers, working 40 hours in downtown Salt Lake City that can't afford any of the housing being built in Salt Lake City," says Jeff White, a long-time volunteer with the Crossroads Urban Center and the Director of the Sarah House Project.

White built the "Sarah House" out of shipping containers in Salt Lake City seven years ago as an experiment in small, affordable living.

The Sarah House was built on an existing lot with a permanent address, attached to a foundation hooked to city utilities like water and sewage. All of these things were required to make the house a legal residence, but they also elevated the construction cost to around $140,000.

Such standards are hard to meet (or afford) for many would-be tiny home owners. They're also tricky for building and fire inspectors to contend with, given the unique features and details a tiny house might possess.

"If somebody puts a fireball in your driveway, you don't want that," White said.

Still, he hopes Salt Lake City will do more to allow safe and legal tiny homes. He says he's spoken with city officials about allowing accessory dwelling units (second homes) to be built on existing lots within a half of a mile of any bus line in Salt Lake City.

The current ordinance only allows for accessory dwellings within a half of a mile of fixed public rail lines, like TRAX.

White also hopes to start a housing lab on the west side of Salt Lake City on city property located between 300 and 400 South and 700 and 800 South, where students from area colleges and universities could converge to design and build small, affordable housing.

In the meantime, small houses are already under construction inside a warehouse on the west side of Salt Lake City. But most of them will leave Utah.

Wheelhaus was born after company owner Jamie Mackay bought an RV park in Wilson, Wyoming, which is just outside of Jackson Hole, several years ago. He began filling the park, now known as the Fireside Resort, with solidly constructed homes, many of which are around 400 square feet. The homes sit on a trailer frame with wheels.

Customers select which Wheelhaus model they like online, place an order and then wait for delivery.

Construction takes roughly three months, and the prices start around $90,000 for the smallest units and quickly go up from there.

Finished houses have been delivered to locations as far away as Georgia and Canada, with another soon on its way to Hawaii.

With the apparent success of Wheelhaus' tiny house business, Fox 13 News couldn't help but ask the owner how big his house is.

While he's living larger than some of his customers, his home is about one-third the size of the average home in the western U.S., which is 2,123 square feet according to the 2010 U.S. Census.

"You don't need 25 shirts and 10  pairs of pants," Mackay said. "You just simplify all that stuff... Once you downsize your stuff, you realize you don't need all the extra clutter. I think the tiny house movement is here to stay." 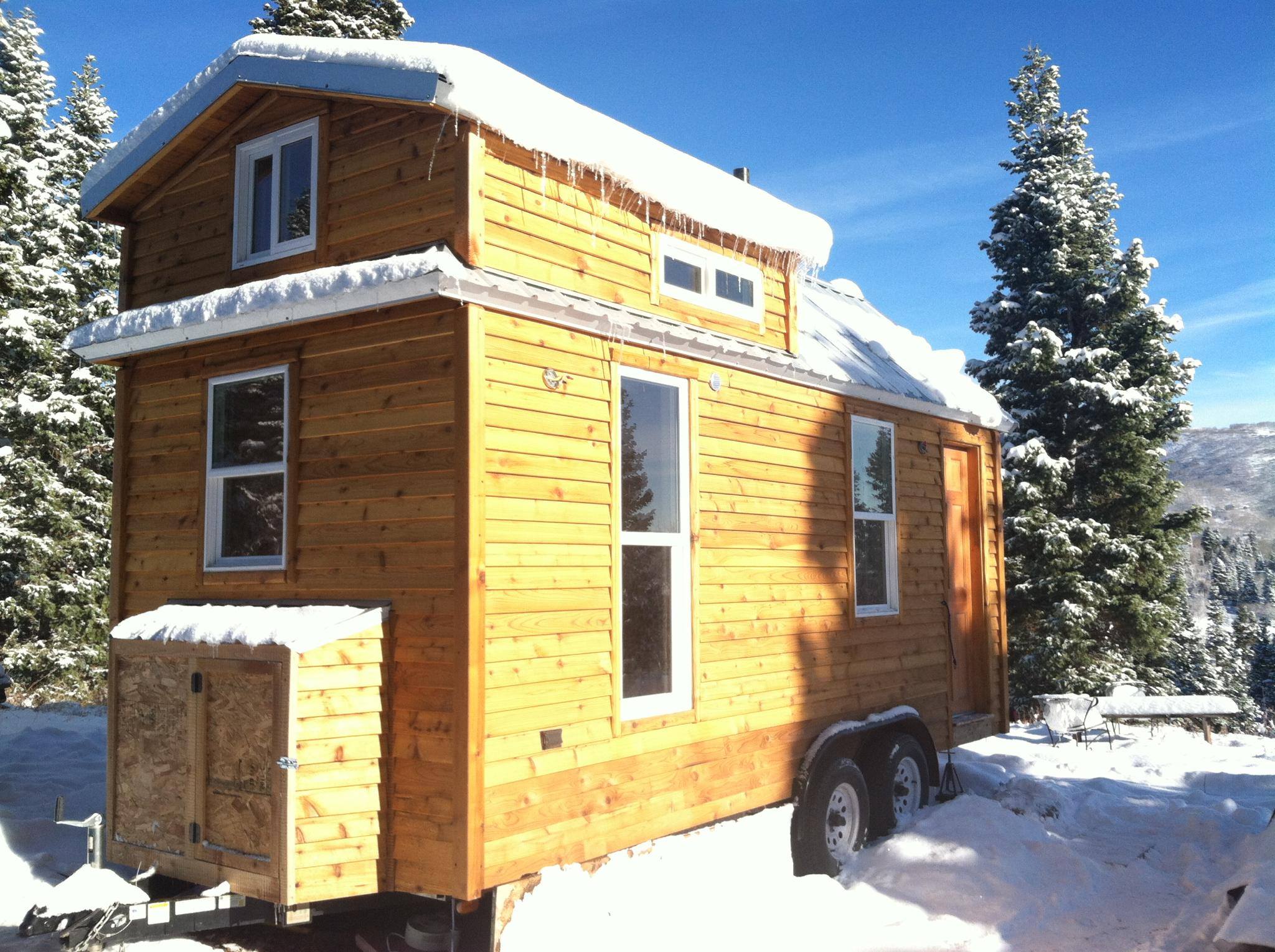