SALT LAKE CITY — The American Civil Liberties Union of Utah released a statement, Monday, regarding the officer-involved shooting near the Salt Lake City homeless shelter that sent a 17-year-old boy to the hospital Saturday night.

According to its statement, the ACLU states they join the Salt Lake City community members, particularly those living in and around the Rio Grande neighborhood, in calling for a full investigation of the shooting of Abdi Mohamed.

Officers confirmed that an officer-involved shooting occurred at 10 p.m. Saturday. Police say Mohamed was involved in a fight in the area of 300 South when officers intervened.

Sunday, police offered an official statement in a press release, stating Mohamed and another suspect were allegedly assaulting a male with metal objects. Police stated one male dropped his weapon when police gave that order, but Mohamed “continued to advance on the victim and was shot by officers.”

The ACLU is urging Mayor Jackie Biskupski and Interim Police Chief Mike Brown to “act swiftly, openly, and objectively in gathering all the facts behind this most recent officer-involved incident.

“We hope that Abdi and his family will be treated fairly and compassionately as all the facts of this incident are sorted out.”

Read the ACLU’s full statement below: 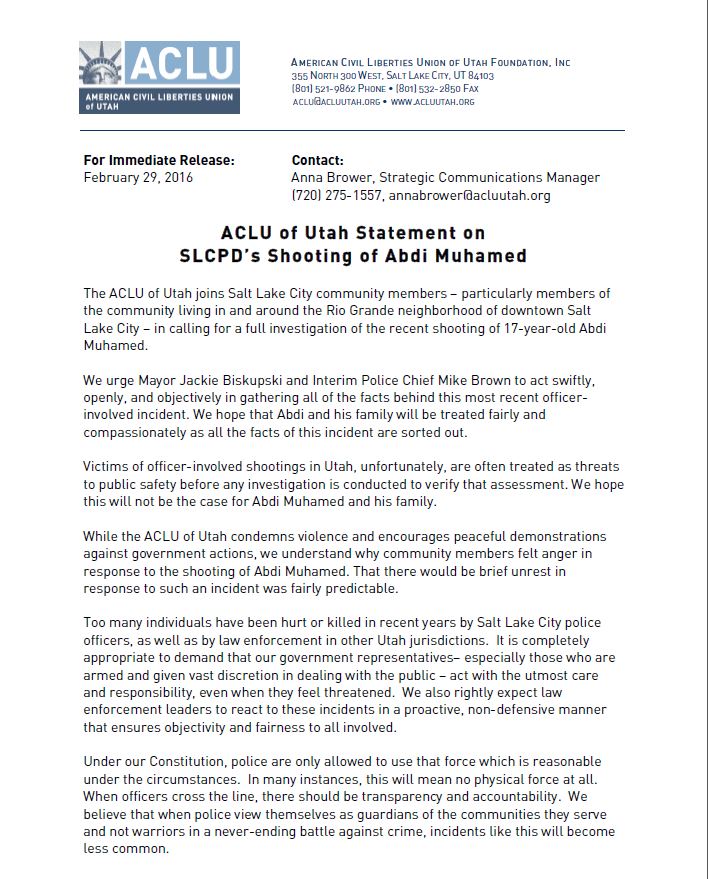