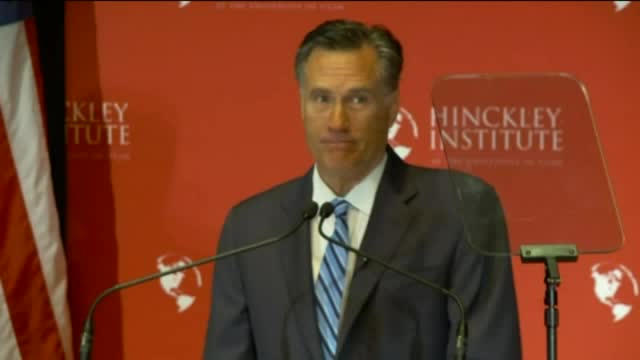 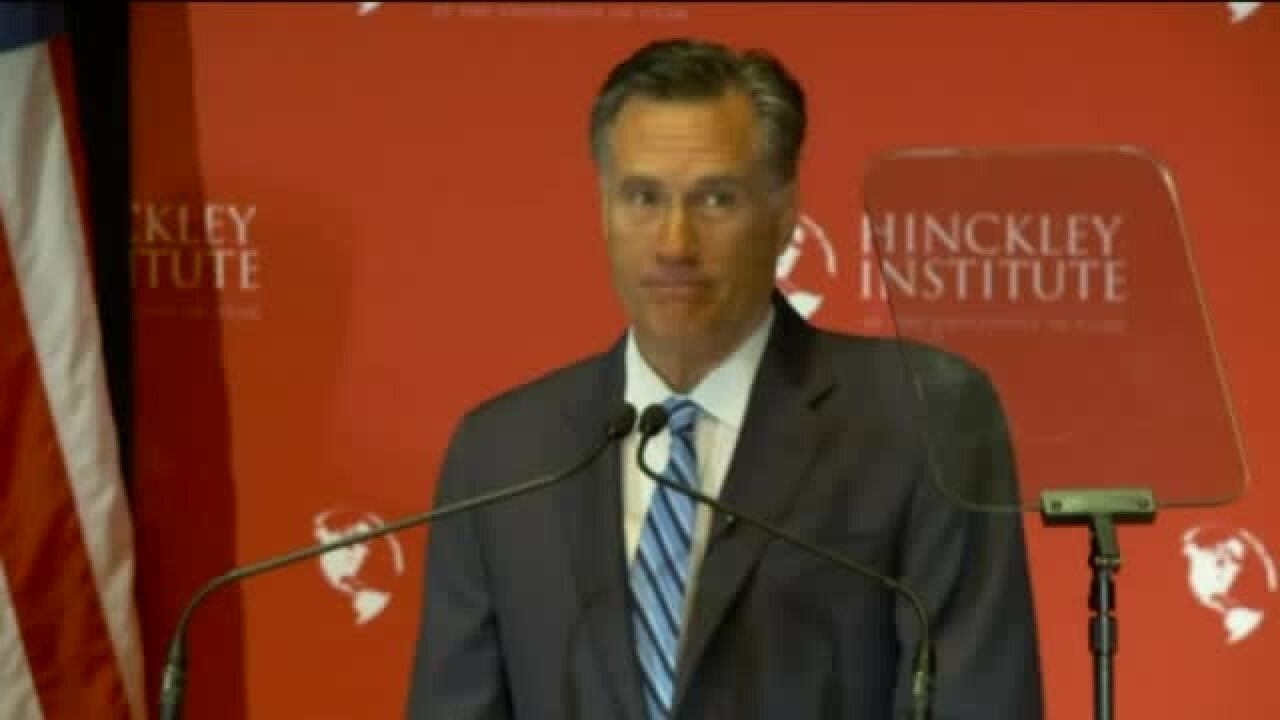 SALT LAKE CITY - Mitt Romney delivered a sweeping broadside against Donald Trump on Thursday, laying into the Republican presidential front-runner with a sharper attack than any of the party's 2016 contenders have made against the billionaire business mogul.

"Here's what I know: Donald Trump is a phony, a fraud," Romney said. "His promises are as worthless as a degree from Trump University. He's playing members of the American public for suckers: He gets a free ride to the White House, and all we get is a lousy hat."

Romney said that "dishonesty is Donald Trump's hallmark," pointing to his "bullying, the greed, the showing off, the misogyny, the absurd third-grade theatrics."

There's irony in Romney's speech: Just four years ago, he courted Trump's endorsement -- even after Trump had led the "birther" controversy against President Barack Obama, insisting that Obama release his birth certificate to prove he is an American citizen.

Trump hit back by mocking Romney's 2012 loss at a campaign rally in Portland, Maine -- pointing to Romney's efforts to secure Trump's endorsement.

"He was begging for my endorsement. I could have said, 'Mitt, drop to your knees' -- he would have dropped to his knees," he said.

He said Romney thought about running again in 2016, but "chickened out."

Romney tweeted after his own speech but before Trump's that had the New York businessman made similar statements about the KKK and others in 2012, he would not have accepted the endorsement.

"If Trump had said 4 years ago the things he says today about the KKK, Muslims, Mexicans, disabled, I would NOT have accepted his endorsement."

But now Romney, the 2012 GOP nominee, is attempting to play the role of party elder during a speech at the University of Utah. He said any of the party's other candidates -- Florida Sen. Marco Rubio, Texas Sen. Ted Cruz and Ohio Gov. John Kasich -- would be suitable choices.

He also amplified the stakes of the election, arguing that a Hillary Clinton presidency would be damaging, as well.

The remarkable speech reflected the splintering of the Republican Party, as party leaders and statesmen increasingly rebuke their front-runner.

Romney didn't endorse a candidate -- saying that, due to the party's delegate apportionment process, he'd vote for Rubio in Florida or Kasich in Ohio, if he lived in any of those states, when they vote on March 15.

It was, in effect, an argument for a contested convention, which would come only if Trump couldn't win enough delegates to capture the nomination on the first ballot.

"If the other candidates can find common ground, I believe we can nominate a person who can win the general election and who will represent the values and policies of conservatism," he said.

Trump, meanwhile, is winning over working-class whites and evangelical voters who are angry with Washington's political class -- breaking turnout records in primaries along the way.

Despite Romney's scathing speech, there are few signs it will dissuade Trump's loyal core of supporters who so far have greeted his most eyebrow-raising antics with swelling support.

Nonetheless, Romney lambasted Trump on foreign policy, casting him as "very, very not-smart" in his comments about allowing ISIS to take out Syria's leadership and for proposing the slaughter of the families of terrorists.

"Mr. Trump is directing our anger for less-than-noble purposes. He creates scapegoats in Muslims and Mexican immigrants. He calls for the use of torture. He calls for the killing of innocent children and family members of terrorists. He cheers assaults on protestors," he said, adding that Trump would trample First Amendment protections.

Romney also said Trump's remarks on CBS' "60 Minutes" on Syria and ISIS "has to go down as the most ridiculous and dangerous idea of the campaign season: Let ISIS take out Assad, he said, and then we can pick up the remnants."

"Think about that: Let the most dangerous terror organization the world has ever known take over a country? This is recklessness in the extreme," Romney said.

Even before Romney spoke, Trump kicked off an anti-Romney social media tirade late Wednesday night, posting a Facebook video accusing the former Massachusetts governor of being soft on cornerstone conservative issues, including immigration and abortion.

Then he knocked Romney on social media Thursday morning ahead of the speech.

The business mogul, who himself has changed positions on abortion, continued hitting Romney and the Republican establishment Thursday morning in a series of tweets.

"I have brought millions of people into the Republican Party, while the Dems are going down. Establishment wants to kill this movement!" Trump tweeted.

Romney also mocked Trump's failed business ventures, pointing to his airline, his casino bankruptcies and more, and attacked his sexual indiscretions, too.

"There's a dark irony in his boasts of his sexual exploits during the Vietnam war, while at the same time, John McCain, who he has mocked, was in prison being tortured," he said

As soon as Romney wrapped up, McCain, the Arizona senator who was the 2008 GOP nominee, said he agreed.

"I share the concerns about Donald Trump that my friend and former Republican nominee, Mitt Romney, described in his speech today. I would also echo the many concerns about Mr. Trump's uninformed and indeed dangerous statements on national security issues that have been raised by 65 Republican defense and foreign policy leaders," McCain said in a statement.

McCain, citing a letter penned by conservative national security experts published Wednesday night, added, "I want Republican voters to pay close attention to what our party's most respected and knowledgeable leaders and national security experts are saying about Mr. Trump, and to think long and hard about who they want to be our next commander-in-chief and leader of the free world."

The extraordinary effort by Romney to take down the Republican front-runner comes amid a last-ditch rush among the party's donors and loyalists to stop Trump from capturing the nomination.

His attack on Trump was an amalgamation of all of the attacks that other candidates and party members have made in recent weeks.

One of his top aides in the 2012 race, Katie Packer, is heading a super PAC that is launching attack ads against Trump. Another super PAC and the hardline conservative Club for Growth are also airing ads critical of Trump.

It could be too late: Trump has already won 10 of the first 15 states to vote, and he has a clear lead nationally over Rubio and Cruz.

Romney cast the coming months' elections as a crucial moment in history, citing Ronald Reagan and saying that this nominating contest is "a time for choosing" -- laying waste along the way to Reagan's fabled "11th Commandment" that Republicans not speak ill of other Republicans.

The dinner occurred while Ryan was on a trip out West to help campaign for House candidates, an aide said. But the aide maintained that the speaker only learned last night that Romney was planning to deliver a speech strongly criticizing Trump.

At his weekly press conference that happened at the same time as Romney's blistering attack on Trump, Ryan was asked about any talks he's had with Romney and the 2012 GOP's nominee's message about Trump, but he said he hadn't "seen the content of the speech."

"Mitt Romney is one of our party leaders, and he cares deeply about the future of the Republican party and the country," Ryan said, adding that "Mitt and I are very close friends."

In his speech, Romney called Trump's policy proposals "flimsy, at best," and said he'd trigger a trade war, drive up the deficit and lead the nation into a recession.

"Even though Donald Trump has offered very few specific economic plans, what he has said is enough to know that he would be very bad for American workers and American families," he said.

"Now I know you say, 'Isn't he a huge business success, and doesn't he know what he's talking about?' No he isn't, and no he doesn't. His bankruptcies have crushed small businesses and their workers. He inherited his business; he didn't create it," Romney said.

Romney also pointed to Trump's exchange about white supremacists with CNN's Jake Tapper last Sunday on "State of the Union" as a general election liability.

"The video of the infamous Tapper-Trump exchange on the Ku Klux Klan will play 100,000 times on cable and who knows how many billion times on social media," he said.