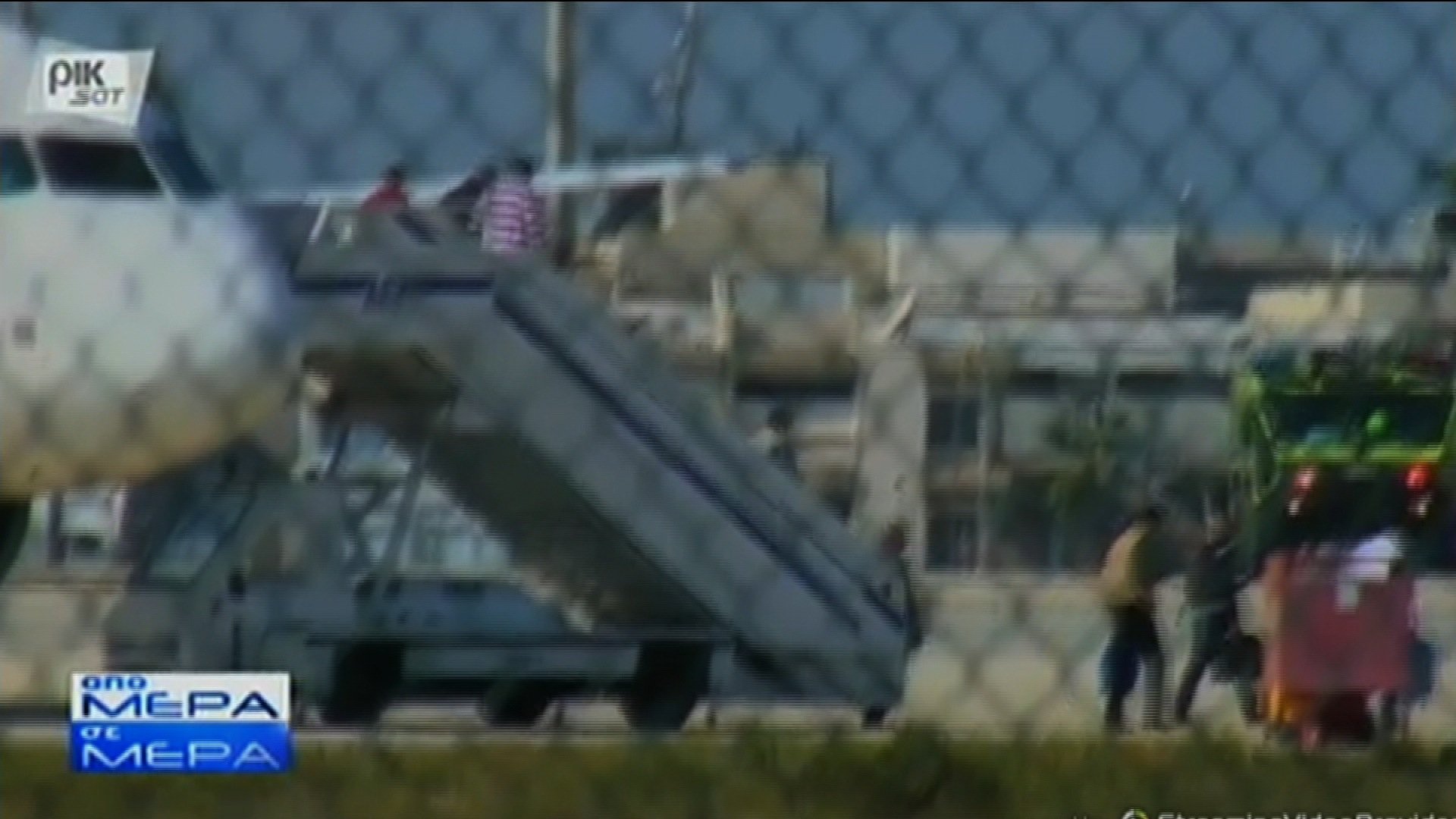 (CNN) — The hijacking of a Cairo-bound EgyptAir flight that was diverted to Cyprus ended relatively peacefully Tuesday when the plane’s crew and passengers safely left the aircraft and authorities took the hijacker into custody.

“The hijacker has just been arrested,” Cyprus government spokesman Nikos Christodoulides said on Twitter, adding a few minutes later, “All passengers and crew are safe.”

Cyprus state television showed video of the hijacker, wearing a white shirt, being led away by a phalanx of police. Earlier, Homer Mavrommatis, director of the Cyprus Ministry of Foreign Affairs Crisis Management Center, had confirmed he was in custody.

Shortly before news of the arrest, video of the aircraft, which was parked on the tarmac at Cyprus’ Larnaca International Airport, showed people leaving the plane, one through a window.

The incident began when an Egyptian man — who presidential spokesman Alaa Yousuf identified as Seif El Din Mustafa — allegedly hijacked the EgyptAir flight because of his ex-wife, forcing the plane to land in Cyprus, officials said Tuesday. The hijacking was not related to terrorism, a spokesman for the Cyprus Transport Ministry said.

The hijacker was “unstable,” Mavrommatis told CNN. Egyptian authorities had been negotiating with the hijacker, but Mavrommatis said his motivation was not clear.

“He kept on changing his mind and asking for different things,” Mavrommatis said.

The Airbus 320 was carrying at least 81 people, but many of the passengers and crew were released during the early stages of the ordeal, Egypt’s Civil Aviation Ministry said.

EgyptAir Flight 181 should have been a short one; it usually takes less than an hour to fly from Alexandria to the Egyptian capital.

But during the flight, a passenger claimed — it appear, falsely — that he had an explosive belt, forcing the plane to turn away from its destination and toward Cyprus, pilot Omar El Gamal said, according to the Egyptian Civil Aviation Ministry.

Officials initially didn’t know whether the hijacker really had an explosive belt, but they had no choice but to take the threat seriously, Egyptian Civil Aviation Minister Sherif Fathy Ateyya said. Later, Mavrommatis said it was clear when the hijacker gave himself up that he was not wearing explosives, but the plane is still being searched.

The hijacking was “a more old-fashioned type of terrorism,” said Sajjan Gohel of the Asia-Pacific Foundation London, explaining that it was rare for such negotiations to take place.

All flights into Larnaca airport were diverted to Paphos International Airport on the southwest coast of the island, the Cyprus Civil Aviation Authority said.

The hijacking was the latest incident to raise concerns about security at Egypt’s airports.

In October, Metrojet Flight 9268 — taking off from Egypt’s Sharm el-Sheikh airport — was downed in the Sinai Peninsula, killing all 224 people on board. ISIS claimed responsibility, saying it breached security and smuggled a bomb on board.

“Ever since the Metrojet plane was blown up, it has been confirmed that there are lapses in Egyptian security,” Gohel said.

Since then, Egypt has promised it would beef up security at airports across the country. Egypt insists that airports are safe and says tourists should come back.

How tourists respond to this latest incident remains uncertain.