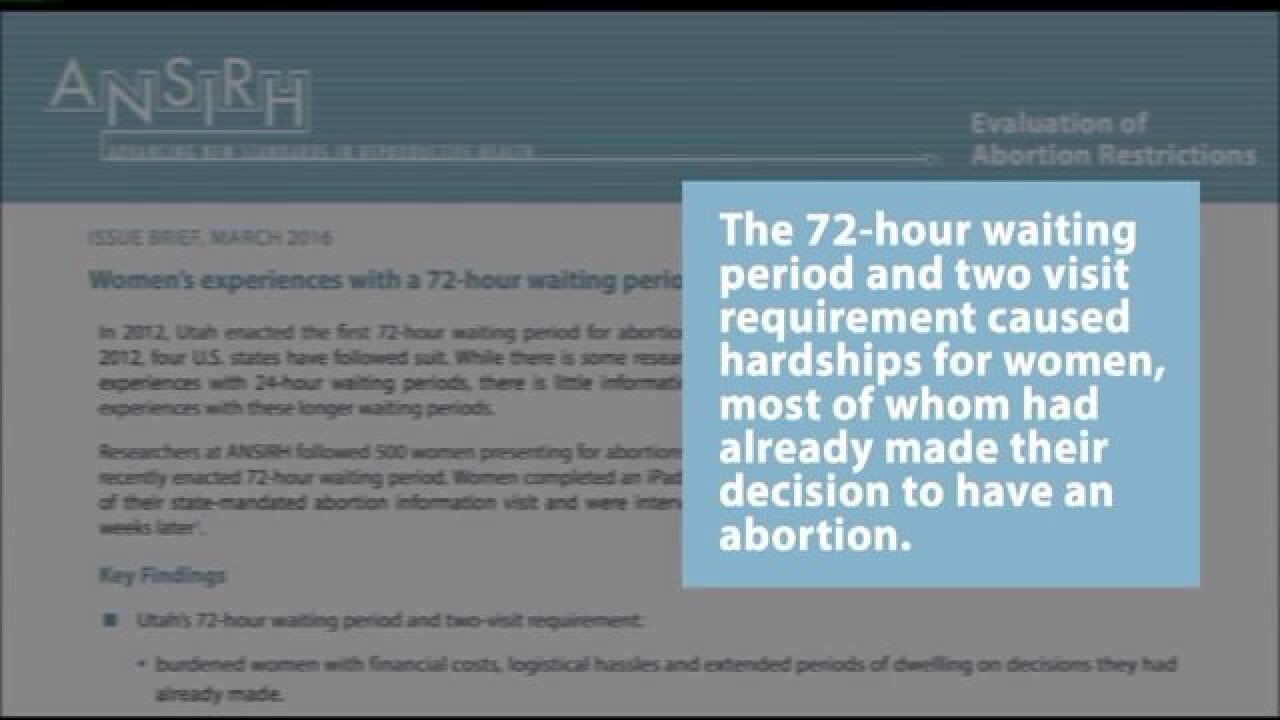 SALT LAKE CITY -- Four years ago, Utah became the first state to mandate a 72-hour waiting period before getting an abortion. Now, the findings of a study conducted a year after the change was enacted have been released.

The study found the waiting period placed financial and emotional stress on women, but one man who crafted the law is questioning the study's validity.

“For women trying to access health care, every obstacle we put in her way is a burden,” said Karrie Galloway, CEO of Planned Parenthood Association of Utah.

That's just what Galloway said the 72-hour waiting period before getting an abortion is: a burden for women.

“To require a woman to jump through hoops because the sponsor of the bill felt like they didn’t make good decisions or haven’t thought about them is stressful for anyone,” Galloway said.

A new study on the Utah law echoes her concerns. Researchers at the University of California conducted the study, and they found the mandatory 72-hour waiting period causes unnecessary emotional and financial stress for women who go on to have an abortion

“To have to make a second trip, take time off of work, find child care, whatever they need to do, this is a burden for women accessing health care,” Galloway said.

“I would hope when politicians were making legislation they would go to medical providers, go to the lives they were going to effect,” Galloway said.

But lawmakers who crafted it say they did just that, and they question the validity of this new study.

“It’s always risky to rely on the conclusion of a study that was paid for, where they don’t want to disclose who their funders are,” said Utah House Representative Steve Eliason, R-District 45.

He says that's just one of the red flags coming from the think tank behind the study, a think tank he said is known for its pro-abortion studies. He argues the waiting periods are necessary for an irreversible medical procedure.

“It’s interesting you don’t see big banks doing studies on why the 72-hour period after signing a mortgage is burdensome and costly,” Eliason said.

Eight percent of the women in the study decided against having an abortion during that 72 hour waiting period. That’s about 24 people.

“In Utah, our rate has gone down 8 percent in the last two years, faster than the national average, so maybe there’s some financial ramifications they’re considering as it relates to their business,” Eliason said.