SALT LAKE CITY -- The parents and doctors of Mason Wells and Joseph "Dres" Empey, two of the four LDS Church missionaries who were injured last week in Brussels, gave a news conference Thursday morning to talk about their recovery.

University of Utah Hospital officials also released new pictures of Wells and Empey, giving a first look at them without their facial bandages.

"Both Mr. Wells and Mr. Empey arrived in actually pretty good condition, so I thank our Belgian colleagues for taking good care of them while they were there at the initial trauma," said Dr. Giovonni Lewis, a surgeon at University of Utah Burn Center. "I'd like to emphasize, and I think they would too, that they just feel incredibly lucky to have survived this injury. And they are doing quite well, in good spirits and they're healing well."

Lewis said she expects both men to make a full recovery.

Chad Wells, Mason's father, thanked the staff of U of U Burn Center and The Church of Jesus Christ of Latter-day Saints for their care and support of Mason.

"Our son has received excellent care. He's in great hands. I don't feel it could be any better hands," Chad Wells said.

Kymberly Wells, Mason's mother, added her gratitude for the kindness given to their family following the March 22 attacks.

"We're so grateful for people's interest and kindness, especially when we were in Belgium. People were so good to us. Everywhere we went, the hotel staff, everyone wanted to make this easier for our family," Kymberly Wells said.

Amber Empey, Joseph's mother, expressed gratitude for having her son back home and sympathy for those who lost family members in the bombings.

"If there's nothing else that we can say, we really want to let you know that there were a lot of parents or loved ones that did not receive a positive phone call. And our hearts break when we think about all the people that have suffered and will continue to suffer forever because of these tragic events," Amber Empey said. "We're so thankful and so excited about how [Joseph and Mason] are doing, but along with that comes a lot of sadness and a lot of thoughts and love that goes to out to anyone and everyone who has suffered this and, you know, throughout the world. We're just, we're really, really lucky."

Court Empey, Joseph's father, also thanked the people who have provided support for Mason and his family.

"We're excited to get back to our home in St. George, Utah. And the prayers, and the love and support that we've felt from the people of St. George as well as Brussels and around the world have just been overwhelming," Court Empey said. "We just feel grateful to be home and we're grateful that he's alive."

LDS Church spokesman Eric Hawkins also spoke at the news conference to read a statement from the family of 66-year-old Richard Norby, another missionary from Utah who was injured in the bombing at Brussels Airport.

The statement said Norby's medically-induced coma was discontinued on Saturday, and that Norby has become increasingly aware of his surroundings. Norby was able to communicate only by head turns following the attack, the statement said, but he is now able to form short sentences. Norby continues to remain in intensive care in Brussels, where he will require surgeries for his left broken leg and shrapnel wounds

No update was given Thurday on 19-year-old Fanny Rachel Clain, a French missionary who was with Empey, Wells and Norby at the time of the bombing. But a recent news release from the LDS Church said Clain had suffered burn injuries on her face and hands, and she had surgery on March 24  for removal of shrapnel.

Thirty-two people were killed and 330 people were injured in the March 22 attacks, which occurred at Brussels Airport and a metro station in Brussels. 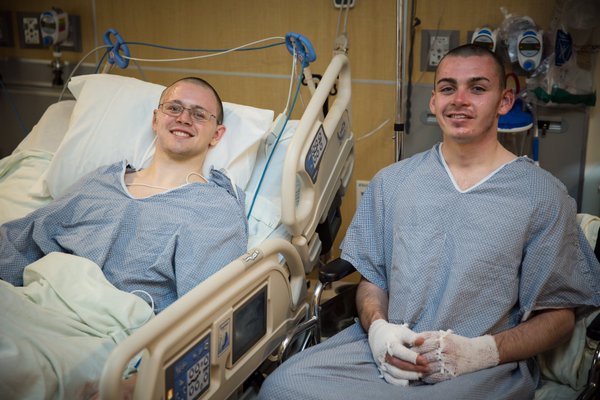