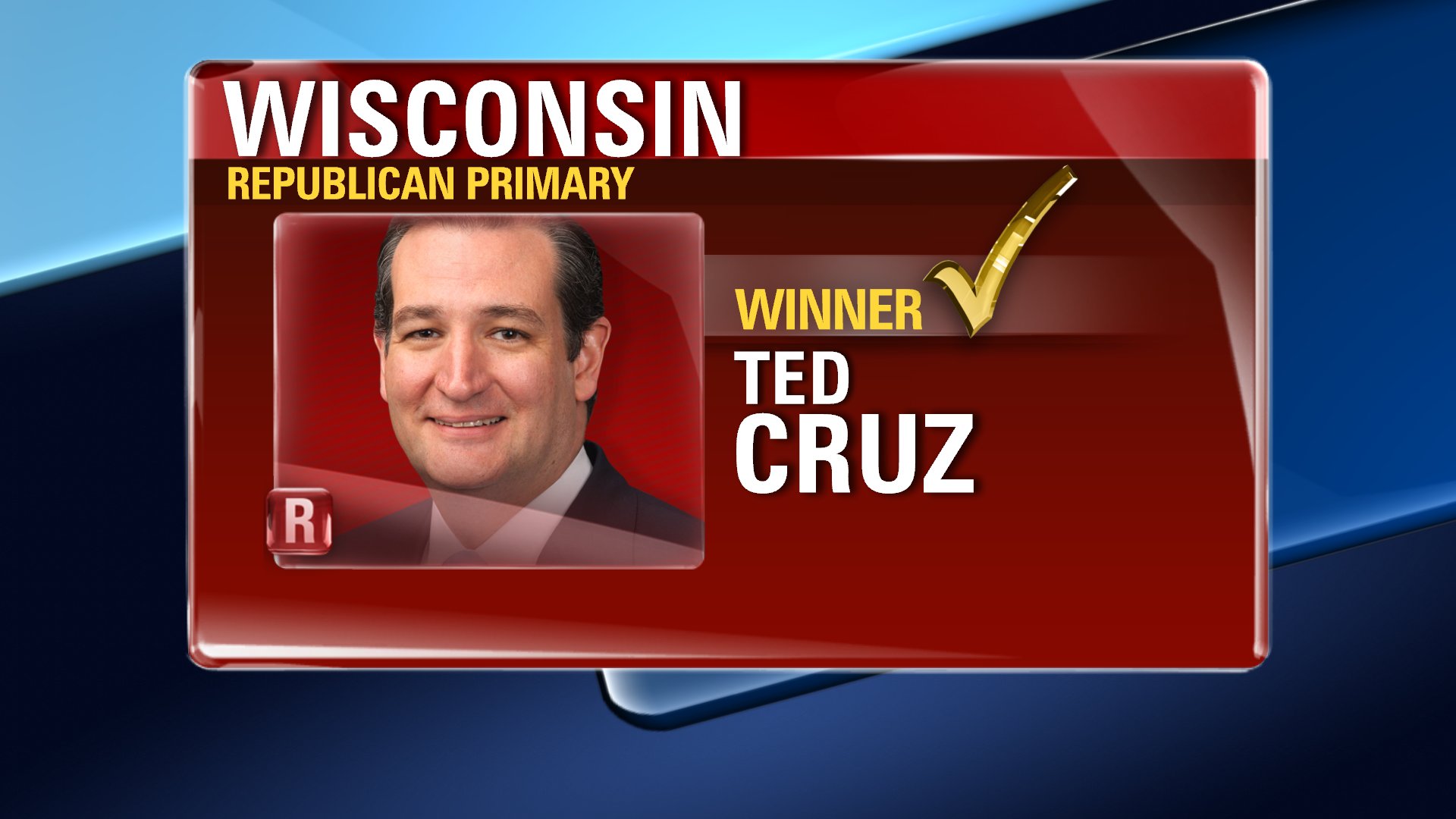 Bernie Sanders, meanwhile, won the Democratic primary, inflicting a tough loss on front-runner Hillary Clinton and racking up his sixth win of the past seven state contests.

Cruz set his sights on a comprehensive statewide victory that could net him most — if not all — of the Badger State’s 42 delegates and bolster his claim to be the only candidate to unite Republican opposition to Trump. With votes still being counted, it is too early to finalize exact calculations on the delegate count.

But the defeat of Trump complicates his drive toward the 1,237 pledged delegates he needs to capture the Republican nomination outright before the convention in Cleveland. It follows a rough week for Trump on the campaign trail that included missteps on abortion and controversial comments on national security.

“Tonight is a turning point,” Cruz declared at a victory rally in Milwaukee. “I am more and more convinced that our campaign is going to win the 1,237 delegates needed to win the Republican nomination. Either before Cleveland or at Cleveland … we will win a majority of the delegates.”

The Texas senator argued that his campaign was now responsible for “the full spectrum of the Republican Party coming together and uniting” and said he — not Trump — is most likely general election candidate.

Despite his exuberance, Trump has a wide lead over Cruz and the other remaining GOP candidate, Ohio Gov. John Kasich. The campaign now enters a stretch of states in the Northeast that favors Trump, including his own delegate-rich state of New York, which votes on April 19.

Once favorable to Trump

Wisconsin was once seen as a favorable state for Trump, since its Rust Belt manufacturing base has been hit by the migration of jobs to low-wage economies abroad and should be receptive to his criticism of global trade deals.

But the state was also a ripe target for Cruz. It has a highly engaged conservative electorate and talk radio network that was energized by Republican Gov. Scott Walker’s election wins — including a recall triumph.

Based on the latest CNN delegate estimates, which don’t include the Wisconsin results, Trump has 740 of the 1,237 delegates needed to win the nomination. Cruz has 474, and Ohio Gov. John Kasich has 145.

Cruz only has a small mathematical chance of winning the nomination, since a flurry of states voting before the end of April favors Trump. Kasich, who has won only one state, cannot reach the magic number in remaining contests.

But both men hope to win sufficient delegates to open the way to a contested convention. Trump currently needs to win 57% of the remaining 871 pledged delegates to clinch the nomination. If he walks away from Wisconsin without adding any delegates, that number rises to 60%, according to CNN estimates.

Still trying to brush off his string of gaffes from last week, Trump turned the focus Tuesday back to the issue that ignited his campaign in the first place: illegal immigration. He issued a memo outlining a plan to bar undocumented Mexican immigrants from wiring money home to relatives if Mexico’s government did not agree to pay $5 billion to $10 billion to fund a border wall.

On the Democratic side, Sanders is aiming to capitalize on a hot streak to build up more momentum heading into the delegate-rich New York primary on April 19, where Clinton hopes to secure a win on home turf to maintain her big delegate lead.

He told an enthusiastic crowd in Laramie, Wyoming, after Tuesday’s Wisconsin win that he has “momentum” and hailed the progress of a campaign he said was written off as “fringe” last year.

Clinton took to Twitter to congratulate Sanders, and to encourage her supporters to keep at it.

“To all the voters and volunteers who poured your hearts into this campaign: Forward!” she wrote.

Earlier Tuesday, it was clear that Clinton was moving beyond Wisconsin. She held a “Women for Hillary” town hall meeting in Brooklyn, where she focused squarely on Republicans and rebuked Trump for “peddling prejudice” about women and Muslims.

“I wish he’d get out of one of his towers and actually walk the streets and spend time with the people of this city,” Clinton said.

Clinton also held a fundraiser in New York City on Tuesday night before returning to her home in Chappaqua to watch the results, CNN’s Jeff Zeleny reported.

The former secretary of state is under intense pressure to match the fundraising juggernaut that is the Sanders campaign. The Vermont senator out-raised her by $15 million in March with his haul of $44 million — one reason, alongside his string of primary victories, why he has no incentive to get out of the race.

Still, he has a more complicated task than Cruz in slowing his party’s front-runner, since Democratic delegates are doled out on a proportional basis rather than the winner-take-most formula used in Wisconsin by Republicans.

And Sanders’ vulnerabilities on issues beyond his core economic talking points were on display in an interview with the New York Daily News editorial board that was published Monday. The interview showed him having difficulty answering some questions about both foreign and domestic policy.

Clinton and Sanders are chasing their magic number of 2,383 delegates to win the nomination. Clinton currently has 1,742 total delegates — 1,259 of whom are pledged or bound to vote for her and 483 superdelegates who have said they support her but theoretically could switch allegiances. Sanders has 1,051 total delegates, including 1,020 pledged and 31 superdelegates.