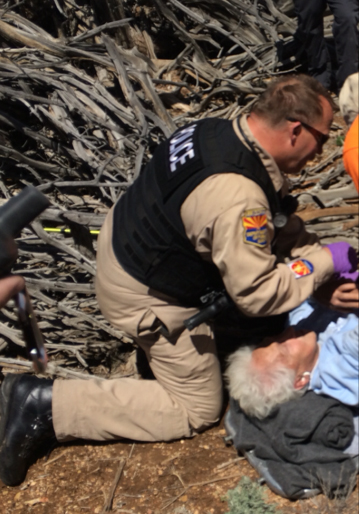 MOHAVE COUNTY, Arizona – A woman from Washington City was found over 10 miles away from her car on Tuesday at about 1 p.m.

According to a press release by the Arizona Department of Public Safety,  Camille Humphrey was “near her death” when they found her on the Arizona Strip.

Camille had been wandering the desert for 2 days after her car got stuck near Mud Mountain.

The  87-year-old was flown to Dixie Regional Medical Center in St. George where she was treated for exposure to the elements, and lack of food and water.

The family of Camille Humphrey would like to express our heartfelt thanks to the Arizona Game and Fish Department, Bureau of Land Management, Mohave County Sheriff’s Department, Arizona Department of Public Safety, St. George Police Department, Washington City Police and Sheriff Departments, and the Dixie Regional Medical Center. Their extraordinary collaborative efforts brought our mom home to us alive. It is a miracle she would survive this experience with no major injuries. Thank you to the many people who prayed for her safe return. All of our prayers were answered. At this time, restoring her health is our primary focus so she continues to recover at Dixie Regional Medical Center.

The Ranger 42 crew responded to the last known point where ground searchers had tracked the victim’s direction of travel and “leapfrogged” in front of the ground search.

Ground crews were able to establish additional last known points based on the woman’s tracks, but determined her tracks were wandering without any specific direction.

It was determined the elderly woman left the dirt road system and was in the open desert, prompting an aerial “grid-type” search by Ranger 42.

The Arizona Department of Public Safety’s Aviation Manager, Terence Miyauchi said, “This mission is a great example of the collaborative efforts of multiple agencies in which the successful outcome potential multiplies.

“Even though our helicopter crew made the final discovery, it may not have been without the incredible effort of the Mohave County search team that tracked this victim to a defined search area. Potentially we could have still been searching a vast wilderness area.”

The elderly woman was found lying on the ground and motionless behind a bush was too weak to sit up without assistance.