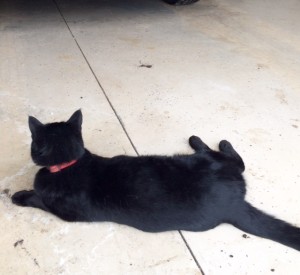 SALT LAKE CITY, Utah – A cat named Blackjack is coming home from the vet on Friday after he was shot in the head.

Vet staff had to remove multiple bullet fragments from the 4-year-old cat’s jaw and cheek.

He was in his owners garage on Tuesday when Lee Johnson discovered the cat was bleeding so he took him to an emergency vet who referred them to another vet center.

Utah Veterinary Center surgeon, Dr Christina Boekhout said, “I was disappointed that Blackjack had been shot, but I considered him very lucky to have such great owners to put him through a repair.”

After Boekhout removed the bullet fragments she put in a plate that connects the damaged portion of the jawbone.

She said Blackjack will need regular monitoring to make sure that bone or scar tissue grows back to give him a functioning jaw.

The Johnsons are clueless as to why anyone would have shot Blackjack because he wears a collar with his name on it which they say makes it obvious he belongs to someone.

Blackjack is a black cat who weighs nearly 20 pounds and is said to be friendly with everyone he encounters.