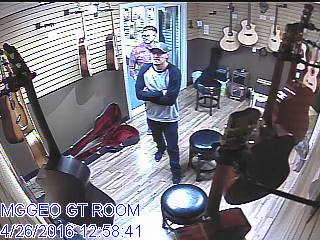 Detectives in Bountiful and Orem are investigating a pair of guitar robberies, and surveillance photos from the two stores affected appear to show the same suspect.

Michael Murphy, who owns Murphy’s Guitars on Main St. in Bountiful, sent Fox 13 photos of the suspect who was caught on camera taking a guitar from the store.

Murphy said the suspect looked around the store for a while and told an employee he was going to purchase a guitar.

As the employee went to the back to get a case for the instrument, the suspect grabbed the guitar and left.

Officers said the suspect is a 6-foot-tall, Caucasian man with heavy stubble, who was wearing glasses, a black baseball shirt, a black Volcom hat and jeans.

Murphy said the stolen guitar is a new Fender American Standard Stratocaster in white with a white pickguard and maple neck, and does not have the case with it.

On Wednesday, Orem police confirmed a robbery at Best in Music, at 444 W 800 N in Orem. Marcus Hight, General Manager at Best In Music, said a rare guitar worth $12,000 was taken from the store Wednesday afternoon.

Hight said the guitar is a Limited Martin John Lennon guitar of which only 75 were made.