DAVIS COUNTY, Utah -- A call came in to the Clinton Police Department about 4 a.m. Friday letting authorities know the Utah suspects and abducted children from an Amber Alert were found, and everyone is reported to be safe.

A Motel 6 clerk in Gallup, New Mexico, recognized Chris Montoya and Monica Martinez when they checked in.

The clerk called police, who responded to the motel where the suspects were arrested and the children, 11-month-old Cynthia Montoya and her 3-year-old sister Marae, were rescued.

Lieutenant Shawn Stoker of Clinton City Police Department said, "This is a perfect example of the systems that are in place."

"Not only that, but all of the public information and attention that came in overnight and into the morning hours clearly made its way to New Mexico leading to a successful and safe resolution."

Clinton City Police started looking for Cynthia and Marae Montoya on Thursday afternoon after reports came in that they'd been abducted by Christopher Montoya and Monica Martinez.

Marissa Villasenor with the Utah Department of Public Safety confirmed a statewide Amber Alert was being issued in the case.

The adults showed up at the children's Clinton residence while under the influence of a controlled substance, according to police, around 3 p.m. Thursday and took the 3-year-old and 11-month old from the residence.

The children's grandmother, Lori Eatchel, said authorities told Montoya Thursday that his children would be remaining in her care because of the man's alleged drug use. Authorities called her after the man left the office, clearly upset with the outcome.

"And so their DCFS lady called and told me they were really upset when they left her office and that they'd probably come here and try to see them, and if they did just to call police," she said. "And I was in Salt Lake at the time, and by the time I called [the babysitter] and told her to call police, they were already in the house."

Both children are in the custody of the state and were taken without permission.

"They have had some ability to visit the children in the past, but we haven't had issues as far as them trying to remove the children prior to this," said Lt. Stoker.

According to police, "The children were endangered as the parents are believed under the influence of a controlled substance, have mental health issues, have violent tendencies, and are transient. They are unable to provide proper care for the children."

The suspects and missing children were traveling in a white, 4-door Cadillac sedan with Utah license plate E718JT. 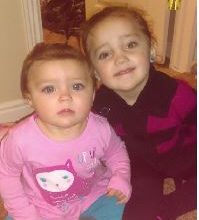