PINEDALE, Wyo. -- A father-son duo on the run after an alleged kidnapping and assault in Centerville last week are now in a Wyoming jail, waiting to get shipped back to Utah.

Flint and DJ Harrison had been hiding out in the mountains of the Half Moon Lake area, near Pinedale, Wyo.

Flint Harrison, 51, turned himself in early Saturday morning, while his son stayed on the loose until late Saturday night.

Less than two hours after the Sublette County Sheriff's Office called off the search for the night for DJ Harrison, Centerville Police Lt. Von Steenblik said a U.S. Forest Service law enforcement officer patrolling the closed-down road with night vision goggles spotted the 22-year-old walking down the middle of the street around 10 p.m.

"He got out, ordered him to the ground and he complied. He was taken into custody without incident." Steenblik said.

They're thankful for a peaceful ending to what's been a grueling week and search for the two men.

Flint Harrison had reportedly told his ex-wife Mary Ann Harrison that he, "did not want to go back to prison" and would "shoot any officer and go out in a blaze of glory."

Sublette County Sheriff's Office Sgt. Katherine Peterson added DJ Harrison had made threats, and they believed he was armed with two knives and two rifles.

"It was just kind of an interesting ending to it. I mean, to make so many threatening statements against law enforcement, to have the report of the weapons on him. Of course we take those things very seriously," she said. "So for him to just wander down the road and be able to be picked up in such a peaceable way-- it was really, really good."

Steenblik said DJ Harrison had no weapons on him when he was arrested.

After the 22-year-old’s capture, he said he immediately headed over to the jail to talk with DJ Harrison about the alleged kidnapping. 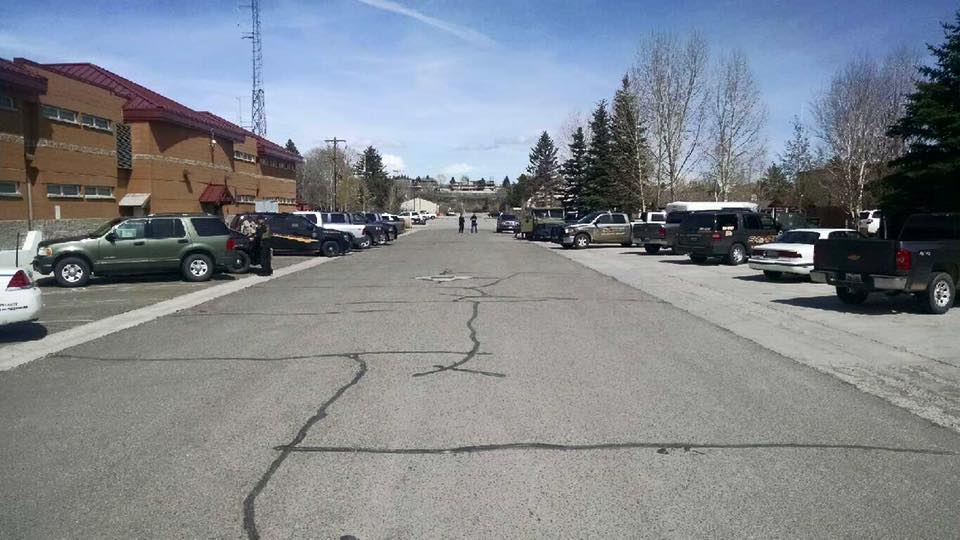 But, he did talk with authorities on his way into town about his hiding in the woods during the manhunt.

"He said that he was just hunkered down under the trees," Steenblik said. "He knew that they were looking for him and he knew that it was a Utah DPS helicopter. Said it flew over him many, many times."

Steenblik said because DJ was underneath tree cover, the helicopter just couldn't spot him.

Search crews did manage to track down the backcountry campsite the two men had been staying at.

It was at that campsite that Flint Harrison reportedly ditched his son during the middle of the night.

When DJ Harrison awoke Saturday morning, he said his father was gone and he didn't know if he left him to keep running, or turn himself into police.

Steenblik said Flint Harrison gave a reason as to why he surrendered.

"Flint kind of said that he was getting scared of DJ," he said. "He made a lot of excuses that we're not completely buying."

It may still be somewhat of a mystery, but for search crews and Centerville police, they're glad it's over and that everything ended peacefully.

Steenblik said they quickly notified the victims about the capture, and that the women are now able to relax and continue healing.

Peterson said the two will appear in the Sublette County District Court sometime on Monday for an extradition hearing. If the men don't sign the waiver to get back to Utah, Centerville Police will ask for a governor's warrant.

Either way, Steenblik said Flint and DJ Harrison will end back up in Utah to face the five counts each of kidnapping and aggravated assault.