FARMINGTON, Utah — A father and son accused of tying up and beating a mother and her four daughters in Centerville have been extradited to Utah from Wyoming, and police now confirm both men are persons of interest in the death of Kay Ricks.

Flint Harrison and his son Dereck Harrison have been booked into the Davis County Jail, where they each face charges of aggravated kidnapping, possession of drug paraphernalia, possession of a controlled substance, possession of a dangerous weapon by a restricted person and interruption/interference of a communication device.

Deputies said they have reason to believe the Harrisons may have driven the Utah Transit Authority truck used by UTA employee Kay Ricks, whose body was found Tuesday night in Lincoln County, Wyoming. The work truck was discovered Thursday morning in a wooded area near Half Moon Lake, in Sublette County, Wyoming.

Police initially held off on saying the two cases were connected, but Thursday evening Lincoln County Sheriff's Office in Wyoming confirmed to FOX 13 News that both Harrisons are considered persons of interest in the death of Kay Ricks.

Earlier in the day, Centerville PD commented on the possibility the cases are related.

“We are asked if there is a connection between the Harrisons and the UTA investigation involving Mr. Ricks," said Chief Paul Child. "The only thing I want to say in regards to that is that it would be an amazing coincidence if they were not."

Lt. Von Steenblik with the Centerville Police Department said the Harrisons will sit in the Davis County Jail so that Wyoming authorities can concentrate on their murder case.

“This will give the Wyoming authorities time to complete their investigation, to get all the information they need and to compile the physical evidence,” Steenblik said.

DJ and Flint are scheduled to make their first court appearance in Utah on Monday.

Tinted windows too dark to see DJ and Flint Harrison. @cpdutah driving them back to Utah to face charges @fox13now pic.twitter.com/GtCajPsXRO 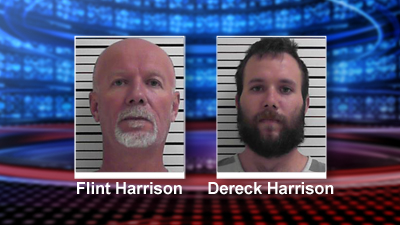