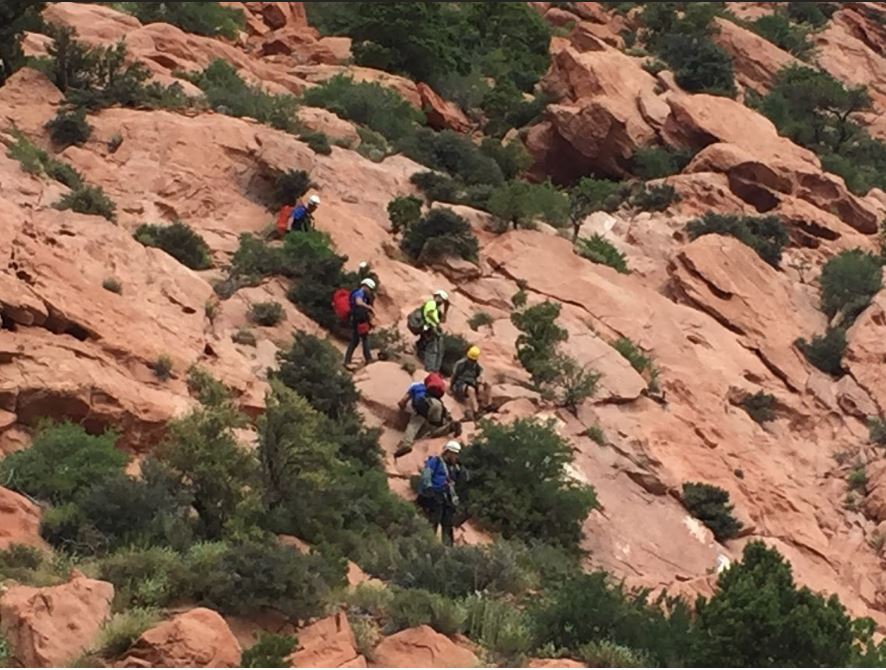 IRON COUNTY, Utah — A man who got stuck in a mountain crevice while hiking in Iron County spent the night on small shelf next to a steep cliff face before rescue crews were able to reach him.

According to the Iron County Sheriff’s Office, a man who recently moved to Utah from Florida was hiking with a friend Friday, and the pair split up after reaching to top to make their own ways down the mountain.

During his descent, 34-year-old John Roberts climbed into an area with very steep terrain and could not get back out again.  Ropes Rescue Commander Mike Gibbs stated Roberts was located in an area that looked, “like a scene in the movies” and the terrain around him was a “very dangerous” place to be. The man was on a small shelf next to a steep cliff face.

Deputies were called about the trapped man around 8:30 p.m., and by just before 9:30 rescuers were ascending the mountain. During the steep ascent, one rescuer suffered a minor injury to his foot as a rock rolled over it. Because the shelf Roberts was sheltering on was safe and he had the necessities for an overnight stay, crews elected to call off the rescue and come back in the morning.

Bad weather, including strong winds, delayed Saturday morning’s rescue efforts, but by about 8 a.m. crews reached an area above Roberts and were able to equip him with safety gear and extract him from the mountain.

The press release notes that the rescue was carried out in the same area where 19-year-old Thomas Christensen lost his footing and fell to his death on June 8, 2015.

“As a reminder we encourage people to only climb areas of their skill levels and always remain together and let others know where they are going,” the press release concludes.