MILLCREEK, Utah - A paramedic and an 88-year-old patient suffered minor injuries after the ambulance they were riding in collided with an SUV in Millcreek, Monday morning.

"I'm relaxing at the light, waiting for it to change, when my peripheral vision picks up a giant white rectangle of metal descending in my direction," said Susan Decker, a witness who was sitting in her car at the intersection.

She said the ambulance narrowly missed her car as it toppled over on its side.

"We have some witness reports that the SUV may have gone through a red light," said Lt. Lex Bell, with Unified Police Department.

Bell said multiple witnesses indicated the ambulance proceeded through the intersection once the light had turned green, but an SUV, driven by a 39-year-old mom and her two boys, ages 4 and 6 in the backseat, came through the red light hitting the back end of the ambulance, causing it to flip.

"We opened the hatch in the back," Decker said, describing her attempt to rush to the ambulance and help open the back doors. "There was a medic with blood streaming down his face and a patient who had slid off his gurney mount."

Bell said the paramedic had minor injuries and was transported to a local hospital, as was the 88-year-old patient.

Occupants inside the SUV were also taken to an area hospital, however, only minor injuries have been reported.

Bell said the driver of the SUV could receive a traffic violation pending the outcome of an investigation to determine if distracted driving came into play. 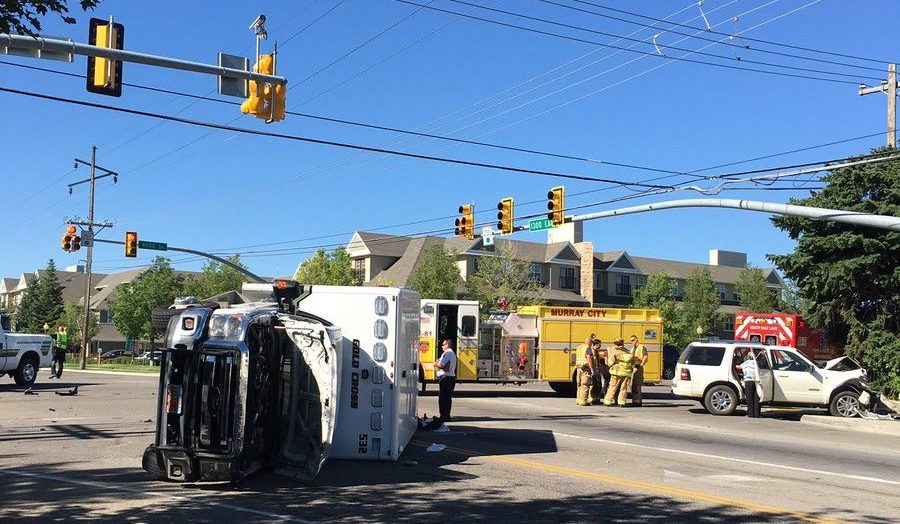 Witnesses say an SUV ran red light knocking over ambulance. There was an 88 year old in back. Updates on @fox13now pic.twitter.com/msCenlfSrn