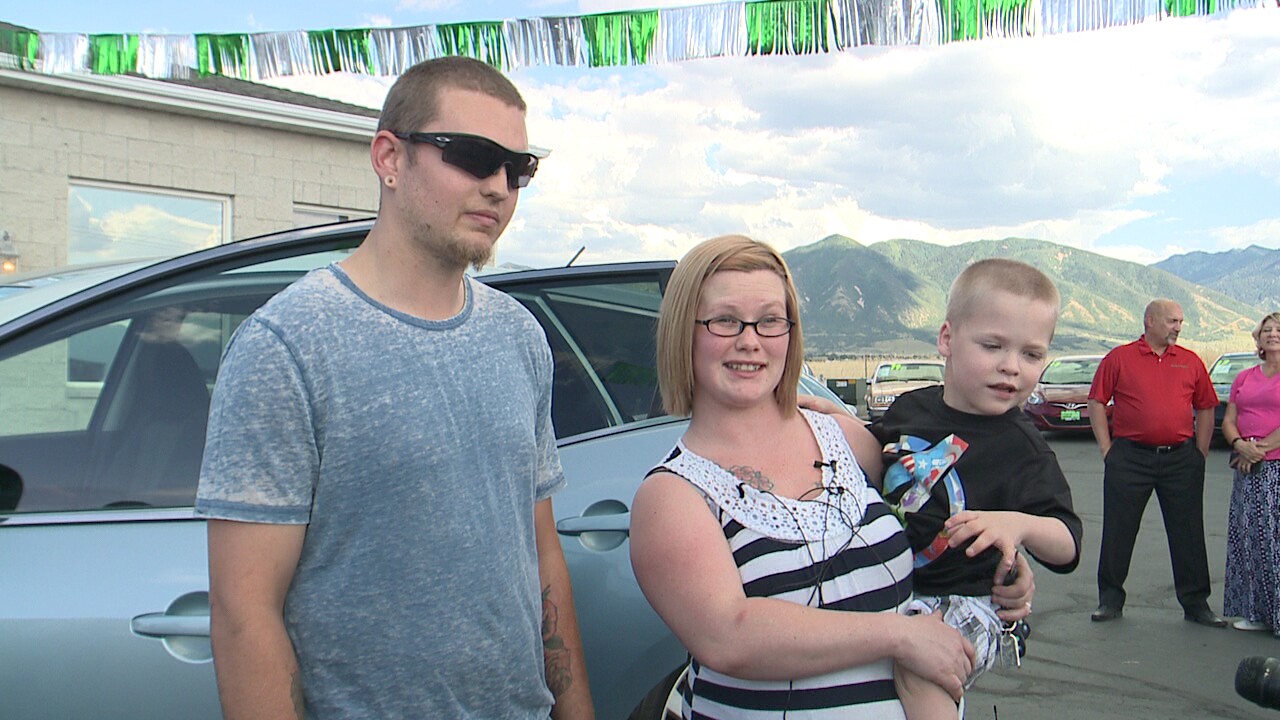 TOOELE COUNTY, Utah — A tragic story touched the hearts of many Utahns this weekend, and a community has come together to help a young family in the wake of a theft.

Austin Johnson and Rose Mintz were feeling stuck after their car was stolen, especially since their 5-year-old son’s wheelchair was inside. Keaton has cerebral palsy, and his mom is 8-months pregnant with his sibling.

After news of the family’s predicament was shared on social media and on the local news, the owner of a car dealership in Tooele stepped in and offered to donate a car. When word of his good deed spread, several other companies and neighbors chipped in with other donations.

The car and other donations were delivered Sunday afternoon, but Mike Garrard, who owns Bargain Buggies, said he originally planned to quickly donate the car without any fanfare.

“This young lady had lost her car, and they lost the wheelchair, and I was really not very happy, and, just to say it short I had planned to come on down here about 10 this morning and give her a car, and just be off with it,” he said. “It’s kind of ballooned from there.”

Garrard said the couple’s plight moved him to take action.

“Well, I mean, she’s 8-months pregnant and she’s got a child with cerebral palsy, and my heart sunk for her,” he said. “It was just, I couldn’t do anything to replace her wheelchair… so, well, what I can do?”

As the owner of a car dealership, Garrard could help the family replace their stolen vehicle and sole means of transportation.

Garrard eventually convinced Mintz he was serious. He said after news got out on a Facebook page used by the Tooele County community, others stepped in.

Auto Tech donated $250, the local Big O Tire offered a free set of tires for the car, and All State Warranties provided a one-year warranty for the vehicle.  A local pub donated a free dinner for the family, and another resident donated toys, clothes and other gifts for Keaton and the soon-to-be-born sibling.

The car, a 2005 Mazda 7, is worth about $7,000, Garrard said. He said he and his general manager couldn’t stand by and do nothing when someone in their community needed help.

“When I started out, me and my wife lived from paycheck to paycheck, it’s not easy,” he said. “So, I’m in the position right now that I can help a little, that’s what I’m doing.”

Mintz seemed still in shock as she and her family checked out their new vehicle.

“I just couldn’t believe our community did this for us, it doesn’t feel real still,” she said.

She said their previous car, the one that was stolen, often had mechanical problems.

“Now we have a car that we do not have to worry about breaking down, that is probably the best feeling about this,” she said. “Our car before this, we always had to worry… This is going to help so much.”

Johnson said after the theft he began to plan for finding more work so he could earn money to replace the vehicle.

“But I don’t have to worry about that, not only because of the people who shared our story, but the community that took the effort of stepping forward to help us out, that’s what really got us,” he said.

The couple has lived in Tooele for about three years, but Johnson said he has relatives who have lived in Tooele County much longer. He said he’s seen what his community can do, but he never thought it would be his family on the receiving end one day.

“A huge thank you from my family to yours,” he said. “I really can’t explain to you much more than that. Tears have been shed, hearts have been broken over this, but it’s the community that has brought us back up.”

A GoFundMe page set up for the family had raised more than $2,000 as of Sunday.

Garrard said from Stansbury Park, to Erda, to Tooele, to Grantsville, to Lakepoint: “We got each other’s back here, that’s for sure.”