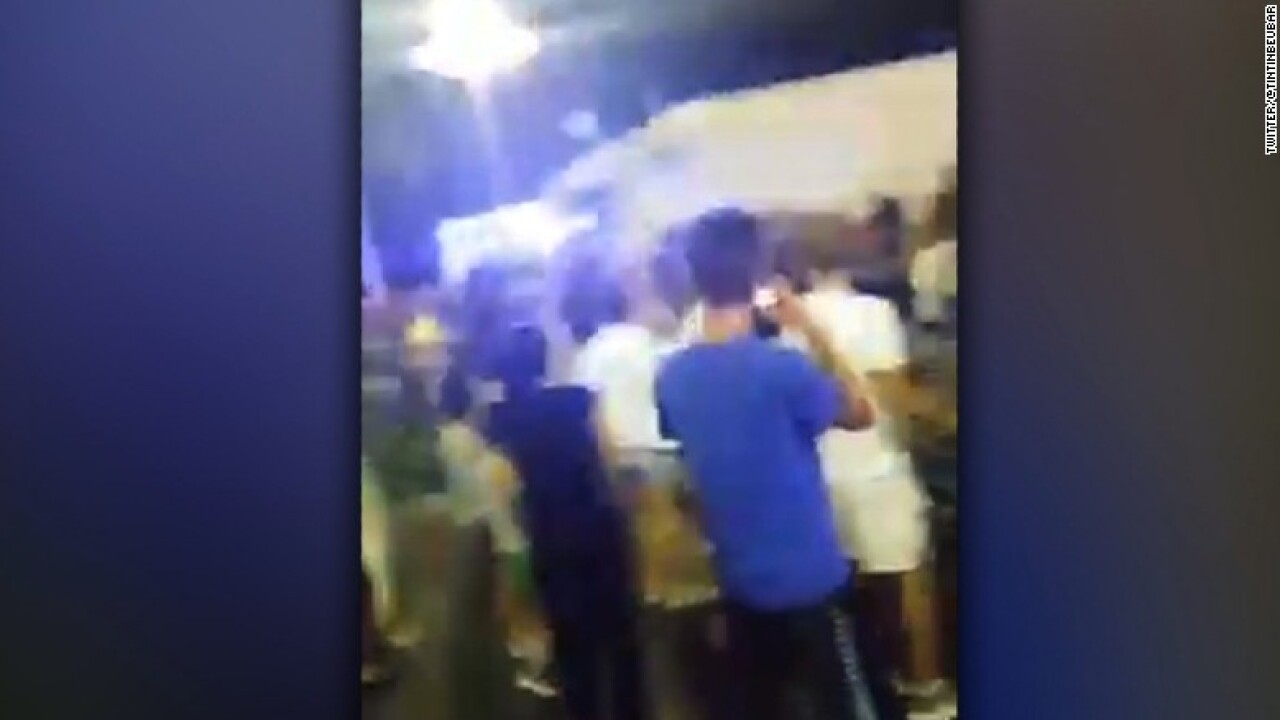 UPDATE: Fox News reports at least 80 people were killed and 18 others were seriously injured in the attack. Two Americans were among the victims.

By Ralph Ellis and Steve Almasy

So far, no group has claimed responsibility. Anti-terror prosecutors have taken over the investigation, according to BFMTV, citing the prosecutor’s office.

Here are the latest developments in the tragedy:

• Hollande addressed the nation, saying all measures are being employed to help the victims. Security measures will be increased and an existing state of emergency, which was scheduled to end later this month, will be extended three months. He said France must exhibit vigilance in the face of terrorist threats.

• The streets were dense with people when the attack occurred. About 100 people were injured, officials said. Witness Tony Molina said he saw bodies of the dead lying in the street, covered in blue tarps and marked so emergency vehicles didn’t run over them.

• Preliminary information from French officials is that there was one individual in the truck, according to a U.S. law enforcement official briefed on the attack.

• American Dominique Molina, who was watching from a balcony, said the fireworks had just ended and a crowd on the beach was disbanding. “People were flooding the streets, just walking away from the show, and I heard a lot of loud noises and people were screaming and so to the west, a big moving truck was driving on the promenade, just barreling over people and hitting — running people over.” She estimated the truck moved at 20-25 mph. Molina said her teenage son witnessed the carnage. “It’s something you’re not supposed to see,” she said. “I grabbed my son, I felt like shielding him, protecting him from seeing that. It happened so fast, it was like in slow-motion.”

• Paul Delane, an American, described the chaos. “All of a sudden, just people, thousands of people, started running in one direction. Well, my partner took my hand immediately and we started running with everybody and honestly in my head I had no idea what was going on and the music was so loud and I didn’t really see a truck, but just people running and screaming and crying and people carrying their children, and it was just very frightening.”

• U.S. President Barack Obama issued a statement condemning the attack and saying, “We stand in solidarity and partnership with France, our oldest ally, as they respond to and recover from this attack.”

• The U.S. Consulate in Marseille advised U.S. citizens in Nice to call family and friends to notify them that they are safe . The Consulate said it was working with authorities to determine whether any U.S. citizens were injured.

• Hollande returned to Paris from Avignon for emergency talks at the Interior Ministry after the incident, according to French national radio.

• France had put intense security in place for Euro 2016, the international soccer tournament that just ended. No major attacks occurred during the event.

• Facebook activated the Safety Check feature for people in and around the area of the attack.

• An American witness at the scene said the driver of the truck was mowing bodies over, and that he appeared to accelerate as he hit those bodies. The witness said he saw only the driver. He heard gunfire as he ran away, but did not know its source. It seemed like an accident at first, but it became apparent very quickly that it was deliberate, the witness told CNN.

• Eric Dartell was eating at a restaurant on the street where the incident happened. “You can see wreckage all along the way, a body, bicycles, street lamps and debris everywhere,” he said.

• World leaders expressed solidarity with France. Canadian Prime Minister Justin Trudeau tweeted: “Canadians are shocked by tonight’s attack in Nice. Our sympathy is with the victims, and our solidarity with the French people.” Brazilian President Michel Temer tweeted: “It is regrettable that on the day [that] eternalized fraternity as the motto of the French people, an attack destroyed the lives of so many citizens.”

• Estrosi said a Rihanna concert has been canceled and that flags will fly at half-mast.