UPDATE: An assistant manager at Antelope Island State Park said the fire is largely under control Sunday. The fire damaged about 14,000 acres, which is half of the island's acreage. Click here for details.

ANTELOPE ISLAND, Utah -- The West Antelope Fire has been mapped at 13,740 acres Saturday night, and fire officials said the blaze is 35 percent contained.

The West Antelope Island Fire was ignited by a lightning strike on Thursday. Crews first arrived on scene at about 5:30 p.m. Friday after someone spotted the blaze on the island's west side. By Saturday morning, the fire had moved over the top of the mountain to reach the east side of the island.

"We may lay off boots on the ground and may go for more of the air resources," said Shayne Ward of the Department of Natural Resources.

On Saturday morning, fire crews were working to protect Fielding Garr Ranch and other historical structures from the flames. As of about 7 a.m., officials believed they would be able to stop the spread of the fire before it gets to those buildings.

Ward said one medium air tanker and two single air tankers have been brought in to fight the fire, along with one helicopter. Local, state and federal agencies are working in concert to extinguish the fire, which at 8,000 acres had damaged roughly one-third of the island's total space. Later Saturday the total acreage rose to 13,740.

Antelope Island is home to wildlife, but Ward said, "At no point are any of these animals in danger." A photo posted by officials Saturday showed an antelope grazing while the fire burned in the background.

Antelope grazing while the #WestAntelope Fire creeps in the background pic.twitter.com/T1hPPEt3sB

Four campsites at the White Rock Bay Campground were evacuated in order to free up space for helicopter operations.

The Fielding Garr Ranch and the All Back hiking trail are closed and will remain closed as crews fight the fire. A Pioneer Day celebration scheduled for Saturday has been canceled. 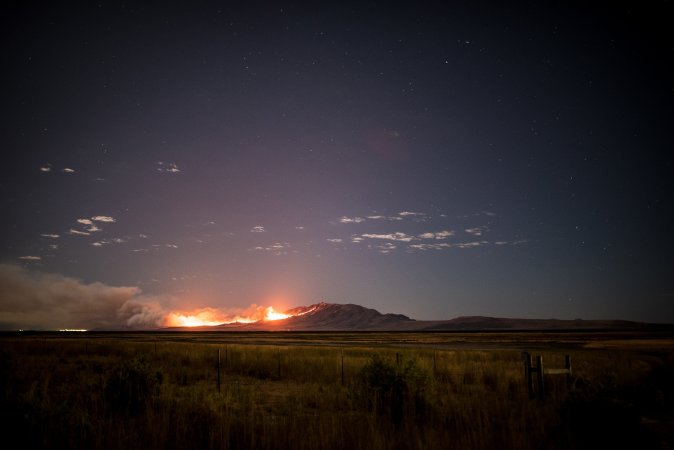