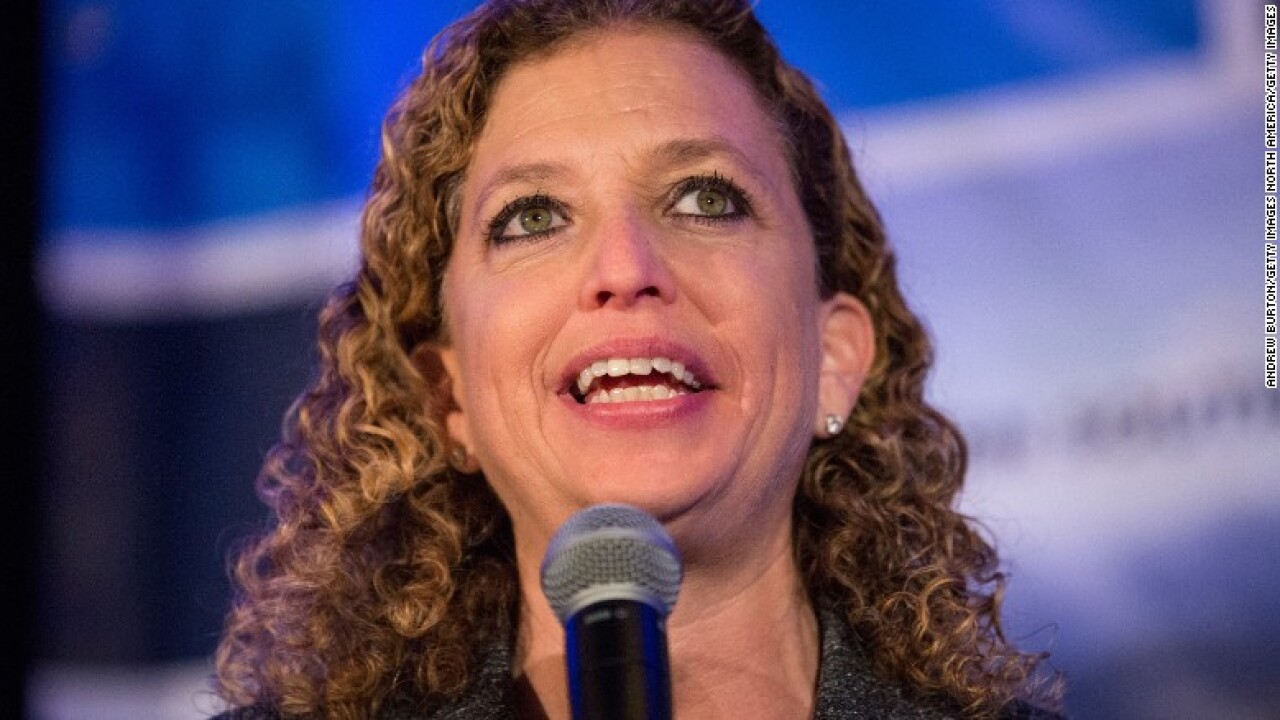 (CNN) — Debbie Wasserman Schultz announced Sunday she is stepping down as chairwoman of the Democratic National Committee at the end of the party’s convention, which is set to begin here Monday.

The Florida congresswoman’s resignation — under pressure from top Democrats — comes amid the release of leaked emails showing DNC staffers favoring Hillary Clinton over Bernie Sanders in the party’s 2016 primary contest.

Her announcement that she was leaving had pro-Sanders supporters cheering during a demonstration in Philadelphia and Donald Trump crowing, too.

In her statement, Wasserman Schultz said that she remains committed to seeing Clinton elected president. She talked with both President Barack Obama and Clinton before making her announcement, a Democratic source said.

“Going forward, the best way for me to accomplish those goals is to step down as Party Chair at the end of this convention,” Wasserman Schultz said in the statement.

“As Party Chair, this week I will open and close the Convention and I will address our delegates about the stakes involved in this election not only for Democrats, but for all Americans,” she continued.

She may briefly address the delegates on Monday for a few minutes, a scenario to which the Clinton and Sanders campaigns have tentatively agreed, sources said.

DNC Vice Chair Donna Brazile will serve as interim chair through the election, it was announced Sunday. She is a CNN political commentator.

Separately, a Democratic operative said Hispanic leaders close to Clinton and her high command were discussing Housing Secretary Julian Castro as a possible successor to Wasserman Schultz at the DNC helm.

Chants of “Debbie is done!” and “Debbie resigned!” broke out at a pro-Sanders rally in Philadelphia after the news was announced.

“She’s been quarantined,” another top Democrat said of Wasserman Schultz, following a meeting Saturday night but before her announcement that she was leaving.

After she announced she was out, Axelrod tweeted, “I find this quibbling over whether @DWStweets leaves now or Friday silly. What difference does it make? She’s out. She’s leaving. Move on!”

Obama issued a statement, saying, “For the last eight years, Chairwoman Debbie Wasserman Schultz has had my back. This afternoon, I called her to let her know that I am grateful.”

And Clinton thanked Wasserman Schultz for her leadership of the party.

“I am grateful to Debbie for getting the Democratic Party to this year’s historic convention in Philadelphia, and I know that this week’s events will be a success thanks to her hard work and leadership,” Clinton said.

Trump also weighed in, tweeting and misspelling Wasserman Schultz’s name, “Today proves what I have always known, that @Reince Priebus is the tough one and the smart one, not Debbie Wasserman Shultz (@DWStweets.)”

Wasserman Schultz already had reluctantly agreed to relinquish her speaking role at the convention here.

Her stewardship of the DNC has been under fire through most of the presidential primary process, but her removal from the convention stage comes following the release of nearly 20,000 emails.

One email appears to show DNC staffers asking how they can reference Sanders’ faith to weaken him in the eyes of Southern voters. Another seems to depict an attorney advising the committee on how to defend Clinton against an accusation by the Sanders campaign of not living up to a joint fundraising agreement.

Before the announcement, Sanders on Sunday told Tapper the release of the DNC emails that show its staffers working against him underscores the position he’s held for months: Wasserman Schultz needs to go.

“I don’t think she is qualified to be the chair of the DNC, not only for these awful emails, which revealed the prejudice of the DNC, but also because we need a party that reaches out to working people and young people, and I don’t think her leadership style is doing that,” Sanders told Tapper on “State of the Union,” on the eve of the Democratic National Convention in Philadelphia.

“I am not an atheist,” he said. “But aside from all of that, it is an outrage and sad that you would have people in important positions in the DNC trying to undermine my campaign. It goes without saying: The function of the DNC is to represent all of the candidates — to be fair and even-minded.”

He added: “But again, we discussed this many, many months ago, on this show, so what is revealed now is not a shock to me.”

The publication of the emails comes just a weekend before the start of the Democratic convention, where a major objective for Clinton will be to unify the Democratic party by winning over Sanders’ voters.

Several Democratic sources told CNN that the leaked emails are a big source of contention and may inflame tensions between the Clinton and Sanders camps.

“It could threaten their agreement,” one Democrat said, referring to the deal reached between Clinton and Sanders about the convention, delegates and the DNC. The party had agreed to include more progressive principles in its official platform and, as part of the agreement, Sanders dropped his fight to contest Wasserman Schultz as the head of the DNC.

The issue surfaced on Saturday at Clinton’s first campaign event with Tim Kaine as her running mate, when a protester was escorted out of Florida International University in Miami. The protester shouted “DNC leaks” soon after Clinton thanked Wasserman Schultz for her leadership at the DNC.

The DNC has previously had its files hacked by an individual named “Guccifer 2.0” that may have had ties to the Russians.

Hackers stole opposition research on Donald Trump from the DNC’s servers in mid-June. Two separate Russian intelligence-linked cyberattack groups were both in the DNC’s networks.

This story is being updated frequently with new developments and additional information.