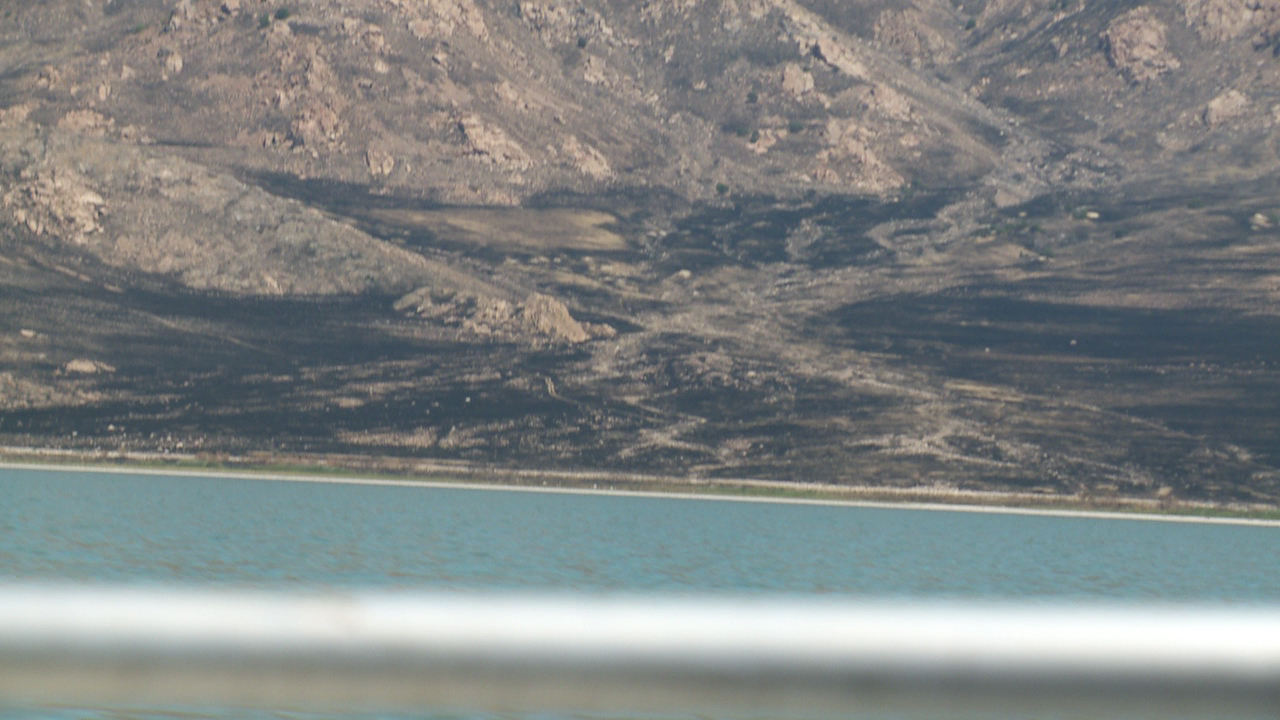 ANTELOPE ISLAND, Utah – Utah State Parks says the blaze at Antelope Island is largely contained Sunday, and they will be investigating the impact to the island’s animals after more than half of the area was damaged by fire.

Sunday night, fire officials stated in a press release the fire was 80 percent contained and had burned 14,560 acres. One firefighter was treated for a heat-related injury and went to a hospital as a precaution.

“It looks to me from where we’re at that the main movement of the fire has been contained, so we’re just putting out hot spots now on the island, so it looks like most of it has been extinguished,” she said.

The fire was started by a lightning strike Thursday, and Friday night and Saturday the smoke from the blaze was visible all across the Salt Lake Valley.

“Antelope Island itself is 28,000 acres, so it’s easily half of the island that’s burned,” she said.

The island is home to a variety of animals. Wilson estimates there are about 750 bison, 500 to 700 deer, 120 bighorn sheep and about 200 pronghorn antelope. She said they were fortunate there were no injuries or deaths.

“It’s been a really safe fight that way, haven’t heard of any crew injuries, haven’t had any reports of wildlife fatalities or any injuries—all good things,” Wilson said.

According to Sunday night’s press release, there have been no confirmed reports of injured animals, and one firefighter said: “In my 18 year fire career, I have never seen any animal endangered by flames, and this fire is no different.”

While the animals weren’t immediately harmed by the fire, Wilson said there are some concerns about the availability of food for the winter. She said crews were able to protect much of the sage brush the animals rely on for food, but they will be investigating further to understand the impact so they can make a plan for winter.

She said the bison feed more on grassland, which was more heavily damaged by the fire than the sage brush that supports other species. She said, if necessary, park officials can supplement the bison’s diet in other ways.

“We’ve had a lot of fires out here in the past, this is the largest in recent history that any of us can remember,” Wilson said. “There have been some that have been further in the south side that burned a bit of acreage, but nothing like this.”

Wilson said she doesn’t necessarily think the damage will translate to a decrease in tourism.

“I think people love Antelope Island, burned or not,” she said. “I think the fact that they do love it, they’re gonna be concerned and come out and want to see the damage. I think it will break their hearts when they see the damage, because it is awfully extensive, but the bison and the animals are still running around, and actually easier to see right now because they kind of have been pushed to that east side.”

Wilson said fire operations will continue overnight Sunday and into Monday morning, but she said they hoped to begin reopening closed areas by Monday afternoon.