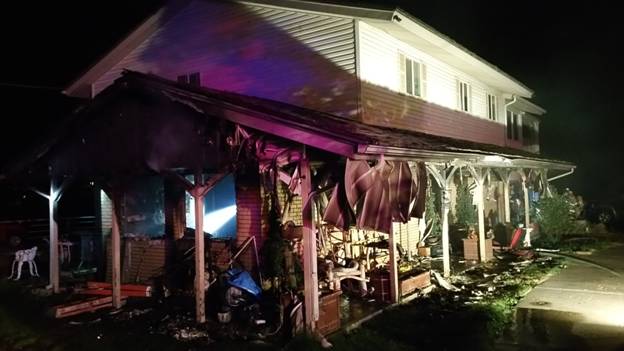 LAYTON, Utah — A fire on the first story of a Layton home required Fire and Police departments to rescue a woman early Sunday morning.

Authorities said Layton City dispatch received a call from an approximately 46-year-old woman who reported her door was hot and she could smell and see smoke coming through the door and heater vents of the floor at her 1450 N. Church St. home. The woman was instructed to place a towel under the threshold of the door and go near the window of the room.

When police arrived on scene they could see flames coming from the front window.

One officer first forced the front door of the home open and heard no response to a call for assistance. Officers then heard heard yelling coming from the back of the home.

Police assisted in placing a 6-foot ladder at the back of the home to help get the woman out.

The woman stated she thought about jumping out of the window before two Layton Police officers arrived shortly, police said.

The woman was the only occupant in the home and was attended to by an ambulance on scene with minor smoke inhalation. She was released on scene.

Fire Public Information Officer Doug Bitton said, “The occupant thankfully was able to awake and do all the right actions and was instructed excellently by dispatchers. Night time fires with no working smoke alarms could have had a devastating loss of life here.”

The Red Cross has been contacted to assist the occupant with initial needs and overnight accommodations, Bitton said.

The cause of the fire is still under investigation, but officials are looking closely at aged chandelier wiring and an extension cord used in the living room, officials said. Authorities also said there was a bottle of cleaner the occupant had used prior near the origin that could have accelerated the fire.

23 firefighters, 3 police officers, and North Davis Fire Department responded to the home and were able to get the fire under control within 15 minutes.